There’s really no polite way to put this. Texas Senator Ted Cruz is either 1) totally lying, or 2) completely delusional, or 3) a fucking idiot.

Allow me to ‘splain. Back in 2010 the U.S. Supreme Court issued a ruling in the case of Citizens United v. Federal Election Commission. In 5-4 decision, the court stated that corporations (and labor unions and other ‘associations’) have certain free speech rights. Since the court had ruled earlier that financial contributions to political candidates or parties are a form of speech, the ruling made it legal for corporations to spend as much as they want to convince people to vote for or against a candidate. 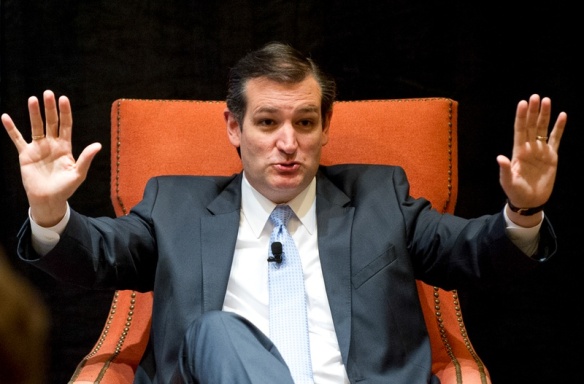 This is not a good thing. It is, in fact, a very bad thing. In response, Democrats in the Senate have proposed a Constitutional amendment that would allow Congress to regulate the raising and spending of money. Seems pretty reasonable. But then… Enter Ted Cruz.

“I grew up watching Saturday Night Live, I love Saturday Night Live. Saturday Night Live over the years, has had some of the most tremendous political satire. Who can forget in 2008, Saturday Night Live’s wickedly funny characterization of the Republican vice presidential nominee Sarah Palin? It was wickedly funny and also [had] a profoundly powerful effect on people’s assessment of Gov. Palin, who’s a friend of mine. Congress would have the power to make it a criminal offense, Lorne Michaels could be put in jail under this amendment for making fun of any politician. That is extraordinary. It is breathtaking and it is dangerous.”

What’s extraordinary and breathtaking is Cruz actually said that. Out loud. He’s really and truly arguing that because NBC is a corporation, the proposed amendment would prohibit Saturday Night Live from engaging in political satire. And that, of course, is utter bullshit. (What kind of bullshit is it? Utter.)

8 thoughts on “it could be all three”