It was a miracle, according to Justin Carper of Shelby, NC. A miracle that his 17 month old daughter was able to feed herself a few hours after she’d been shot.

“It went through the top of her shoulder. She was feeding herself using that shoulder, using that arm. The bullet went straight through. You wouldn’t even know. Doctor after doctor have told us that there’s nowhere else the bullet could have gone that would have ended up with this story. My mind is pretty much blown.”

A miracle. Carper writes a Christian parenting blog, so I guess he’s familiar with the notion of miracles. But me, I’m thinking miracles wouldn’t be necessary if Carper had had enough common sense to put his 9mm pistol someplace where his three year old son couldn’t get to it and accidentally shoot his baby sister. And you know what blows my mind? At this point, no charges have been filed against Carper. Praise Jeebus.

Thirteen year old Eddie Zee could have used a miracle that same day, when he and his buddies were playing with a shotgun in Puyallup, WA. But no, instead Eddie was killed. Too bad, Eddie — no miracles for you. At this point in time, no charges have been filed against the parents who left the shotgun in an accessible place. 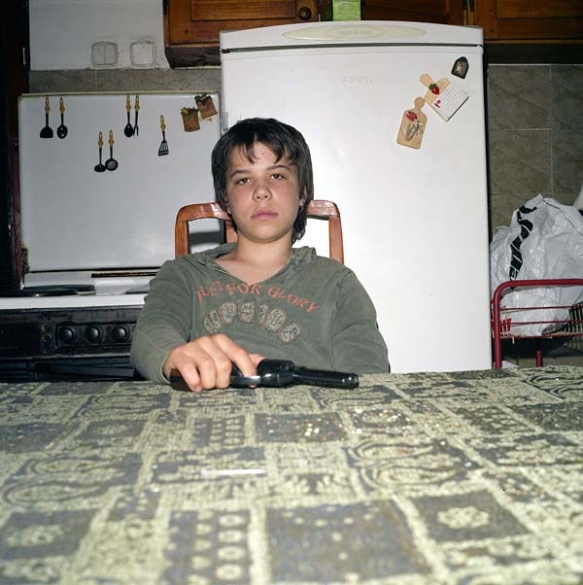 A few days earlier in Park Ridge, IL, the 14 year old son of Joseph Streff accidentally shot himself with the handgun his dad had given him for Christmas. Since the kid got the weapon in celebration of the birth of Jeebus, I guess we can consider it a miracle that he only shot himself in the leg. He’ll recover.

I guess you could also count it a miracle that the unnamed ‘juvenile’ in Little Rock, AR wasn’t killed when he was shot in the face with the handgun he and his buddies were playing with. Jeebus must have been watching over him — just not very well. Maybe he was distracted. By what?

By Isom Brumfield, who took his 7 year old son with him to an auto parts store in Milwaukee. When it came time to pay for his parts, Brumfield first had to remove his handgun from his pocket. He laid it on the counter, but the clerk (who apparently wasn’t willing to trust in miracles) asked him to put it away. As he was doing that, Brumfield dropped the weapon, which discharged. The round hit his son in the leg. Brumfield has been charged with a misdemeanor — ‘negligent handling of a dangerous weapon.’ How’s that for a miracle?

That apparently didn’t use up Milwaukee’s miracle quota. A couple days later a group of kids (aged 11 to 17 years) were playing with a shotgun in somebody’s basement. The shotgun was loaded with bird shot; when it accidentally discharged, five of the kids were wounded (and, I suspect, most of them were deafened). None of the wounds were life threatening. It’s like an advertisement for bird shot — Less Likely to Kill Your Kids!

That same day in Columbus, OH, a ten year old boy was shot by his eleven year old brother. The victim, happily, lived. According to the boy’s aunt, he ‘found the gun in an alley.’ It’ll be a miracle if anybody believes that story.

In Como, MS, two brothers, 11 and 14, went deer hunting. By themselves. As they were climbing up into a deer stand on the family property, the older brother accidentally shot the younger in the neck and shoulder. Miraculously, the victim is expected to survive. So are the deer.

But miracles were in short supply in Nashville, TN, where seventeen year old Kaemon Robinson and three friends were messing about with a handgun. It accidentally discharged, hitting fifteen year old Kevin Barbee in the face. No miracles here. Barbee was killed, Robinson is facing a murder charge.

A few hours later, in St. Mary’s, WV, an unnamed 15 year old girl was shot in the head while watching television. A neighbor, Robbie Knight, had decided to clean his .40 caliber handgun like a responsible gun owner. Unfortunately, Knight neglected to unload his weapon. It discharged — the round went through the wall of Knight’s home, traveled the distance to the victim’s home, went through that wall and hit the girl in the head. The miracle? At last report, the girl is still alive, although in critical condition.

And in Wichita, KS, a 70 year old man was playing ‘quick draw’ with two boys, aged ten and fourteen. Predictably, the old guy accidentally fired a round, grazing the ten year old in the face. The man was arrested and charged with two counts of aggravated child endangerment. After he was released by police, the old man returned to his home and killed himself with a gunshot to the head.

All this happened in the last week or so. According to the American Academy of Pediatrics around 3500 children and adolescents are killed each year in gun-related incidents. Many of those deaths are preventable. It doesn’t take a miracle; it just takes common sense. Trigger locks, gun safes, prosecution of adults who make it possible for kids to shoot themselves or others.

There are a couple lessons to be learned here. Miracles are totally unreliable. And there’s no mercy in ballistics.

Editorial note: All the photographs are by the amazing young photographer, Andrijana Pajovic