I didn’t bother to watch the ‘debate’ between Bill Nye and Ken Ham. It would be like watching a ‘debate’ over which is the better school — Harvard or Hogwarts. One is real, the other is imaginary. I don’t care if there are people who actually believe in Hogwarts so long as they don’t claim there’s a rational and scientific basis for that belief.

In the same way, I don’t care if some folks believe the Earth is only a few thousand years old, or that there’s no such thing as evolution. But if they put forth an argument that science supports that idea, then I’m left with no alternative but to assume those people are just stupid.

Case in point: Matt Stopera of Buzzfeed asked some of the creationists at the Nye/Ham bunfight to write a message to, or ask a question of, evolutionists. Here are some of them:

But yes, even considering that, it’s still completely illogical.

Uh…the rotation of the Earth on its axis? See, this is where science comes in handy. The Earth was formed from the slow collapse of an asymmetrical cloud of dust and gasses and other crap leftover from the Big Bang. Since the cloud wasn’t symmetrical, the collapse wasn’t symmetrical either, and that imparted angular momentum to the process, which set the newly formed planet spinning. Since all this took place in space (where nobody can hear you scream and there’s no source of friction other than the nearby moon) the planet continues to spin. Unless you choose to believe that the Sky Magician creates a continuous light show to amuse his humans.

Also? Learn the difference between ‘their’ and ‘there’ and ‘they’re.’ 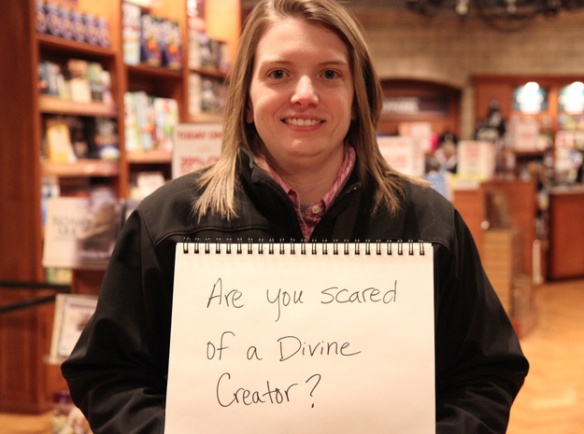 If one existed, you’re damned right I’d be scared. I mean, this is the Divine Creator who said “I have wiped out many nations, devastating their fortress walls and towers. Their streets are now deserted; their cities lie in silent ruin. There are no survivors—none at all. I thought, ‘Surely they will have reverence for me now! Surely they will listen to my warnings. Then I won’t need to strike again, destroying their homes.’ But no, they get up early to continue their evil deeds.”

If there was any truth in Zephaniah 3:6-10, then I’d be scared out of my fucking wits. And that’s just one of dozens of genocidal urges your Divine Creator gave into. That dude is totally scary. 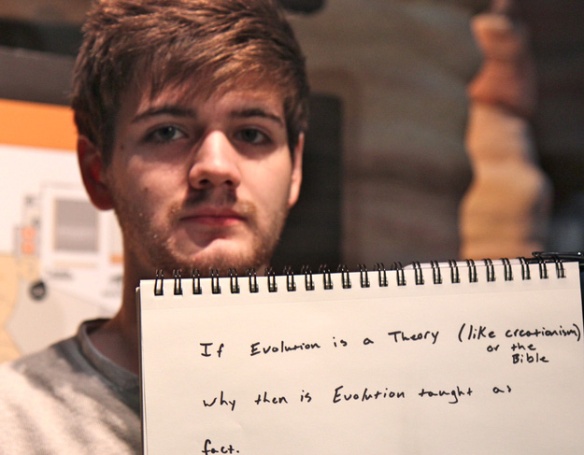 Dude. Okay…the theory of evolution is a theory. The phenomenon of evolution is a fact. It seems nobody taught you what a theory is. Basically, a theory is just an attempt to coherently explain a phenomenon. Here’s an example. In the ancient Greek region of Magnesia ad Sipylum some folks discovered stones that would attract iron. Their theory was that the stones emanated tiny particles that swept away the air between the stone and the iron, and the consequent suction drew iron forward.

We no longer believe magnetism works that way. Why? Because people tested that notion and found it to be wrong. That’s how science works. You observe a phenomenon, you come up with an explanation, then you try to prove that explanation is wrong. If you succeed in proving it wrong, then you adjust the explanation — the theory. Science does NOT attempt to prove a theory is correct.

Our theories about magnetism are more sophisticated now, but we still don’t completely understand it. And yet nobody thinks magnetism is ‘just a theory.’ Magnetism is a fact. It’s what keeps your kid’s artwork stuck to the refrigerator. And evolution is a fact as well.

Seriously, the only thing more stupid than the previous question is the next one.

How did you ever get out of school? Seriously, how can you be so smugly stupid? If somebody taught you that evolutionists believe humans ‘came from monkeys’ then you were lied to. If you believed it without question, then you’ve been played for a sap.

This is really sad. This guy probably wasn’t born stupid. He was trained to be stupid. Somebody told him “Evolutionists believe humans came from monkeys” and he probably thought to himself, correctly, That’s a totally stupid thing to believe. But did he ask himself Do they really believe something that stupid? Apparently not. He didn’t bother to learn what evolution actually means — and nobody encouraged him to. In fact, they probably actively discouraged him from learning about evolution. And he just believed what he was told.

Here’s another place where science comes in handy. Science never believes what it’s told. Science always challenges. Science always demands evidence, and is never completely satisfied with it. That’s why theories — theories of gravitation, of magnetism, of evolution — continue to change over time.

The problem isn’t that some folks believe the Earth is only a few thousand years old or that they believe a Divine Creator cobbled humankind out of “the dust of the ground.” People believe all sorts of ludicrous and stupid stuff, and for the most part no real harm comes of it. The problem is that science is under attack. Not just the results of scientific research, but science itself — science as a system of understanding the physical world. Does it really matter that this guy thinks evolution means humans evolved from monkeys? No.

What matters is that he’s the product of a system that keeps people stupid. Stupid people are easier to control.

7 thoughts on “why are there still monkeys”