Okay, on behalf of all the non-Christians in These United States, let me apologize to the Christians. We’re all terribly sorry. Had we known that somebody in a California Costco warehouse put labels on some Bibles that read $14.99 Fiction, and had we known those Bibles would be shipped to a Simi Valley, California Costco store and put on the shelves, and had we known that Pastor Caleb Kaltenbach was going to be there last week shopping for a Christmas gift for his wife, and had we known that Pastor Kaltenbach was going to see those Bibles and totally shit his pants in outrage, we’d have stopped that guy in the warehouse from affixing those stickers. We’re really terribly sorry about that. 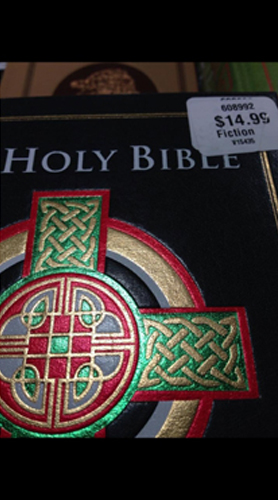 Okay, I’m just kidding. We totally did that on purpose. Sometimes we just feel a wee bit frisky and decide ‘Let’s go fuck around with some Christians.’ Seriously, I don’t know what gets into us. Maybe it’s our diet or something, I don’t know. But it’s totally our fault.

Youthful high spirits, and all that. But still, we probably owe Pastor Kaltenbach an apology. We ruined his shopping experience. He was absolutely correct when he said:

“We are supposed to be living in an era of tolerance, but what Costco did doesn’t seem too tolerant.”

He’s entirely right; it’s rude and inappropriate to insult the Bible. In fact, it’s wrong to insult anybody’s holy book. Again, I’m not a Christian, so when in doubt about how Christians are supposed to behave I always look to that font of Christian charity, goodwill, tolerance, and wisdom: FreeRepublic.com.

Where is The Holy Queeran?

The Koran should be in the toilet paper section

Here in the PNW a bus service had these pro Palestinian adverts. I made up a bunch of Israeli flag stickers and plastered those signs with them. The local pro Palestinian org. threw a hissy fit. I love what I do.

I always place pork products over the “halal” certified lamb.

Bet a Muslim employee put them there.

I’d be tempted to pick up a few Korans and put them over with the bulk packages of toilet paper.

[T]hese fiction stickers are something I’ve heard rumor of: libtards have supposedly a supply somewhere of stickers reading “fiction” that they slap on anything that hurts their sensibilities.

That last guy? I don’t know how he found out about our Libtard Sticker Project. Somebody has been talking out of school. Probably one of the Satanists — those fuckers just can’t keep a secret.

Anyway, I’m not trying to make excuses here. We were wrong, I admit it. But c’mon, you’d have done the same thing if you’d thought of it first. You know you would.

So how about this: we’ve put a sticker on a few Bibles, and you guys have torched a few mosques and murdered a bunch of Sikhs and accused Buddhism of being a cult and refused to allow Pagans and Wiccans to be buried with their holy symbols. You made some mistakes, we made some mistakes. How about if we just call it even, okay? Shake on it, go our separate ways, let bygones bury their hatchets. What do you say? Think if over, let us know.

But I’ve got a feeling y’all just won’t agree to that.

7 thoughts on “sorry, totally our fault”