Okay, I intended to write something semi-intelligent and mildly educational about an aspect of the gun rights movement that outsiders are mostly unaware of — the incorporation of the Greek phrase Molon labe into the rhetoric of Second Amendment absolutists. There’s really some interesting stuff there, and you’d really have liked it (I’m pretty sure you would)…but then something happened.

I first came across the phrase Molon labe on Gun Appreciation Day back in January. It was a weird day in a lot of respects, and seeing some guy put up a sign with a Greek phrase didn’t seem any weirder than the other things that happened that day. Another guy standing near me in the crowd of gun enthusiasts asked “What the hell does ‘melon labe’ mean?” 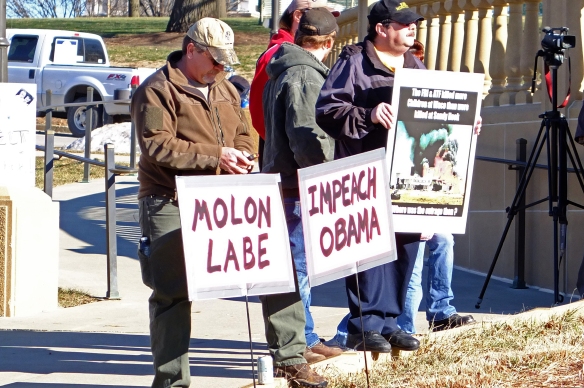 It’s important in military situations to be concise; to speak quickly and precisely, so that orders are clearly and immediately understood. When you’re under attack you don’t want to waste time saying “Okay, listen up…I want you to affix bayonets to your rifles and form a hollow square, two ranks deep, facing outward toward the enemy, with the unit’s colors and officers inside the square.” You just want to shout “Form square!” and be done with it.

Anyway, that crisp quality of military speech was prized by Spartans. They were literally (and by ‘literally’ I mean literally, not figuratively, so fuck you Merriam-Webster) men of few words. That was apparent at the battle of Thermopylae in 480 BC. The Persian King Xerxes sent an emissary to the Spartan King Leonidas, offering to allow the Spartans to live and be resettled on better land (dramatic pause) IF they would lay down their weapons. Leonidas reportedly replied “Molon Labe,” which basically means “Come and take them.” It’s a great line. 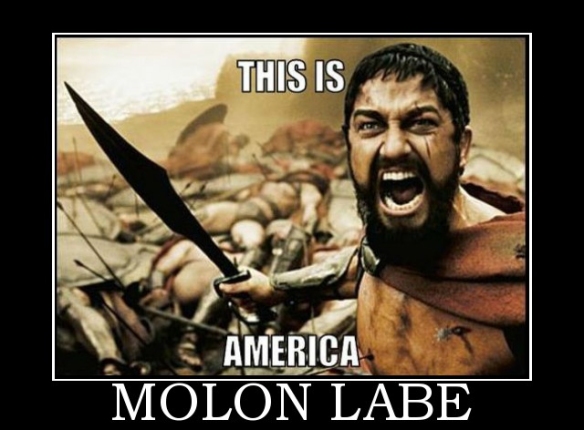 That Spartan phrase has now been adopted by Second Amendment absolutists. These folks believe (or claim to believe) President Obama has an ultra top super secret plan to seize everybody’s firearms. They fancy themselves to be modern-day Spartans (only fully dressed — except in rare circumstances, which you’ll see in a bit), courageously standing up to the tyrant Obama and daring him to come and try to take their guns. It’s ridiculous, of course, but in order to pretend to be Spartans, you need to invent a tyrant and defy him.

See, I was going to get all intellectual on you guys. But then I stumbled across this:

Watching this is a lot like being repeatedly struck in the head with a ball peen hammer. It leaves you confused and unsure what the hell just happened. Was that really a fat white guy wearing a cape and a Spartan helmet claiming to be King Leonidas returned to save America, riding down the street between mobile homes because that’s what the Revolutionary War was fought for?

Yes. Yes, it was. And my attempt to write an intelligent, semi-educational post just collapsed — like that guy’s horse is about to do. So in the words of the resurrected Leonidas, let’s put my stifling helmet back on and ride some more. God bless the truckers. Impeach Obama. Molon labe, bitches.