A week ago four women met at a restaurant in Dallas, Texas. It was the monthly meeting of a gun control group called Moms Demand Action for Gun Sense in America (and you know these women were actually moms, because only a mom could come up with such a lame-ass title for a protest group). In response to this threat to the Second Amendment of the Constitution of These United States, forty members of a gun rights group called Open Carry Texas (a much more effective name, by the way — pithy and to the point) showed up outside the restaurant. And because they believe in open carry laws, they openly carried their weapons.

Photographs were taken. This is the one that got the most attention:

It looks like these 40 armed citizens have formed a firing line and are waiting for the members of MDAfGSiA to emerge. The four women didn’t emerge, though, on account of they were intimidated by — well, by 40 armed citizens.

Intimidation? Pshaw. The OCT folks say they weren’t there to intimidate anybody. They were there to show peaceful opposition to the position taken by MDAfGSiA, which was their right under the First Amendment of the Constitution of These United States. And they weren’t forming a firing line; they were posing for a much friendlier, cheerful, patriotic photograph. 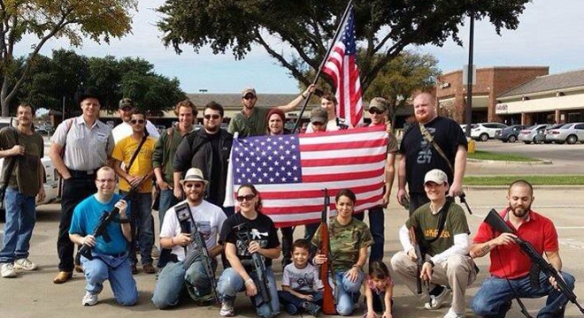 See? Nothing to be afraid of. Just a bunch of smiling white folks carrying assault-style weapons and American flags. Outside a restaurant. In the middle of the day. Nothing intimidating there. The patriots at FreeRepublic.com point out how silly it was for those four women to feel bullied or intimidated.

“Bullies!” is the new “Nazis!” code word little snivelers use when somebody disagrees with them.

This wasn’t some knitting club the OCT was counter-protesting, these are Bloomberg’s operatives that want to take our RKBA [Right to Keep and Bear Arms] away.

I’d just moon the dumb bitches and tell em “Put a Liplock On My Ol’ Love Porkchop” and go on my merry way… And THEN I’d show them the old “This is My rifle…. and this is my gun… This one’s for shooting… and THIS one’s for Fun…” See? I’m a nice guy!

Seriously, how could anybody possibly be intimidated by nice guys like this?

That’s some scary shit, right there. I mean, look at him. He’s standing right there, deliberately wearing a beret. A military style beret. And oh my god, he’s black. He’s got some sort of paper in his hand. Probably the Communist Manifesto of the Black Panther Party against White People.

This is clearly a threat. Obvious intimidation. A menace to public safety. What would the patriots of FreeRepublic.com have to say about this blatant attempt to frighten decent law-abiding citizens?

Call in the snipers.

These thugs should be arrested, tried, convicted, sentenced, and then hanged for treason.

How great would it be to see a “Sons of Anarchy” style motorcycle gang ride up on these fools to see how determined they were to stand on those corners? I’d pay to watch that.

These bastards are robbing the people of their votes..Someone really needs to do something about the fools.

Everytime The Democrats or liberal media complains falsely about the Republicans being responsible for voter disenfranchisement, everyone needs to point to this story and the one 4 years ago when the 2 black new black panther thugs were carrying billy clubs outside of a voting district and intimidating voters.

Look at that one guy — oh my god, he’s holding some sort of stick! That could be used as a weapon. You could hit a person with it. What has this country come to? Do we really want to live in a land where black guys in berets can just stand on the street openly carrying sticks?

Black panthers are allowed to gang bang and hang out election polls? What the flying frack?!

people will be afraid to vote

I call this DOMESTIC TERRORISM

I wish there would have been Black Panthers outside my voting place. I have 4 years of bottled up anger inside me and that is one cork they don’t want to pop.

Forty white folks smiling, toting firearms, holding American flags — just an exercise in protecting Constitutional rights, perfectly fine, nothing to be alarmed about, don’t be silly. Couple of black guys, not smiling, holding pamphlets and sticks, wearing berets — that’s intimidating, be afraid, call the police, or stand your ground and shoot them.

And if four women meet at a restaurant to discuss gun policy — be brave; gather three or four dozen folks, arm yourselves, and stand outside that restaurant. Don’t let those four mothers intimidate you.