Call me old-fashioned, call me a traditionalist, call me a fuddy-duddy — but I miss the old days. When I was a kid, the War on Christmas didn’t begin until after Thanksgiving. Not any more. Yesterday the publisher HarperCollins released Good Tidings and Great Joy: Protecting the Heart of Christmas, by Sarah Palin.

That’s right. Sarah Palin is out there protecting the very heart of Christmas. According to HarperCollins,

At a time when Christian values are challenged—when the greeting “Merry Christmas” has been replaced by the supposedly less offensive “Happy Holidays”—Governor Sarah Palin makes the case for bringing back the freedom to express the religious spirit of the season.

You guys! You maybe didn’t notice it, but we totally lost our religious freedom when ACORN elected Baraq Hussein Obama (Mujahideen, Kenya, Africa) as President of These United States. We are no longer free to wish anybody “Merry Christmas.” 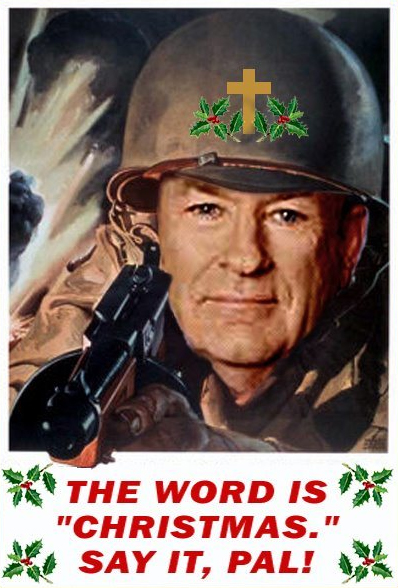 You’re either with Christmas — or you’re with the terrorists!

But happily Sarah Palin (Patriot, Macy’s, Grizzly Mama Department) has her name on a book that tells oppressed Christians how to fight back against the tyranny of being forced to say those two most loathsome words in the American language: Happy Holidays. Here are some of the former Governor’s peppy Words of Wisdom:

An angry atheist with a lawyer is one of the most powerful persons in America.

Totally true, you guys.You think Magneto was tough? You think The Joker was mean? You think Lex Luthor was cruel and relentless? Pffft…those guys were pikers compared to Angry Atheist (and his evil sidekick Lawyer). Angry Atheist is so tough, so mean, so cruel that Marvel Comics is afraid to write about him. According to Palin,

Also totally true. Think about it, you guys. The lawsuits brought by atheists to prevent Christian displays on public property are SO MUCH WORSE than the expulsion of 800,000 Jews from medieval Spain by the Tribunal del Santo Oficio de la Inquisición. A couple centuries of torture of Jews and Muslims (and what the hell, a few hundred Lutherans) — that’s like a day playing with koala bears compared to the agony of having to hear people say “Happy holidays.” Seriously, ask yourself this question: would you rather live in a world where 5th grade students in public schools are denied the freedom to stage a play about the virgin birth of the Christian savior, or one in which a government agency legally uses torture to punish and/or convert citizens who disagree with religious orthodoxy? Think about the little children!

“Say it! Say ‘Merry Christmas’ and this will all be over.”

The Atheist Commie Muslim assault on ‘Merry Christmas’ is taking place on several fronts, some of which will totally shock you. As Palin points out,

Seriously? I had no idea Walgreens was the drugstore of the Devil. I mean, c’mon, they seem SO American. They invented the malted milkshake, you guys! How did they manage to hide their fiendish nature from the American public for 112 years? Atheists are some sneaky anti-Christmas bastards.

I bet Charles Darwin never understood this: If the world could be described as truly  ‘survival of the fittest,’ why would people collectively be stricken with the spirit of generosity in December?

Jolly Old Saint Nick bathes in the light of Special Jeebus Magic before taking to his flying-reindeer-driven sleigh to deliver gifts to Good (Christian) Boys and Girls.

Sarah Palin wants all Americans to live in a world where we no longer have to be terrified to say “Merry Christmas.” She’s SO brave, you guys. But still, would it kill anybody to wait to celebrate the War on Christmas until after Thanksgiving — the day we’ve set aside to thank God and Jeebus for letting us share a meal with those natives who survived the diseases we brought to the Americas (before we had to slaughter the savage bastards in order to expand the territory we seized from them and exploit the land’s natural resources).

I suppose I shouldn’t complain too much. Somebody has to protect the heart of Christmas from atheists and other Heart-of-Christmas-haters. Kudos to Sarah for standing up and putting her name on a book that’s sure to turn the tide in the War on Christmas (all proceeds, by the way, are being donated to a fund to support former half-term governors of states from which you can see Russia). 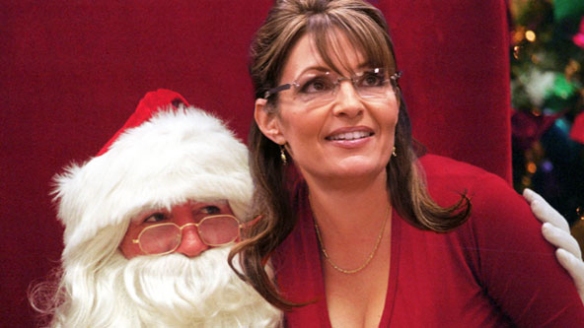 “Santa, all I want for Christmas is to sell a buttload of books.”

And so, as Tiny Tim observed, God bless us, every one.

Editorial note: Except John McCain. Curse you John McCain, for inflicting Sarah Palin on an unsuspecting public. May you be boiled with your own pudding, and buried with a stake of holly through your heart.

11 thoughts on “can’t we wait until after thanksgiving?”