So this morning, in an effort to avoid doing the work I really need to be doing, I decided to wade through rabidly conservative FreeRepublic.com again. I usually do this once a week or so.

A lot of my friends think I’m masochistic to read FreeRepublic, but I don’t think so. It’s true that I often find myself offended, or even pissed off, by what I read. And sometimes I find the comments funny in a ‘holy shit, can people really be this stupid’ sort of way. But I should also say that every time I read that site, I find a few people who make logical and valid points. I almost always disagree with those points, but it’s sort of comforting to know that even on FreeRepublic there are rational conservatives.

Sadly, that wasn’t the case this morning. I was most discouraged by a discussion thread grounded in an article in The Guardian: Gay marine bids farewell with show of support from colleagues. I fully expected to find anti-gay comments and slurs in the discussion, but the universal depth of the hatred surprised me. Here are some of the comments:

I support heterosexual troops only. maddog55

The site of that flag dishonored in that way, makes me want to throat punch this homosexual. svcw

You can’t be gay and a Marine. It’s an Oxymoron. It’s like saying you can be a Homosexual and be a Christian. Sorry, direct opposites. Just because the deviant-in-Chief, and his sycophants have (hopefully) temporarily allowed it, does not make it right, correct, or good. SoConPubbie

This is actually a desecration of the flag. You might as well have the queer stripes on our national flag! Disgrace and dishonor. Viennacon

Probably glad to get this c**ks***er out of their unit. Well, he is isn’t he! Ruy Dias de Bivar

i wanna puke but working here in faggotland, my puke levels have reached the bottom. americana

Another daily reminder of what a sick, utterly deviant country this has become. A disgraceful abomination. greene66

I’m a veteran. I served four long full years as a medic. I come from a Marine Corps family (I was the only member of my family NOT to serve in the Marines). I may not always like what the military does, or how they do it — but anybody who puts on a uniform and serves the nation deserves a certain amount of respect. 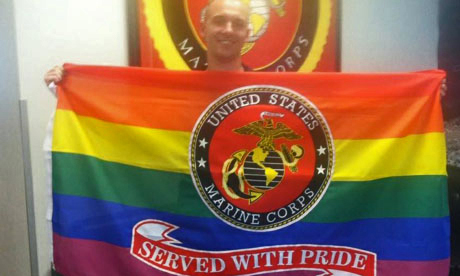 Not to get dramatic, but there are occupations in which you have to rely on your comrades. Police officers, firefighters, military troops. You don’t have to like the person you’re working with, you don’t have to agree with them, you don’t need to be friends with them, but you goddamn better be able to rely on them. And they goddamn better be able to rely on you. Religion doesn’t matter, sexual orientation doesn’t matter, race doesn’t matter, gender doesn’t matter — not when you need a hand. When you need a hand and that hand is extended, you grab hold. When somebody else needs a hand, you extend yours and you hang on tight. It’s just that simple.

The military depends on unit cohesion. Bigots like maddog55 or SoConPubbie argue that openly gay troops are a threat to unit cohesion. The fact is, they are the threat. If you’re unwilling to extend your hand to help somebody because of some immutable aspect of that person’s being, then you make the unit weak.

The marine in the article, Bryan Eberly, needed courage and trust in order to come out as gay. That’s what you look for, courage and trust. I’d much rather serve in a unit with Bryan Eberly than any of the so-called ‘patriots’ above, who apparently believe only certain people deserve respect.

Addendum: And just to prove my earlier point about FreeRepublic.com, there’s this new comment in the discussion thread:

I’m grateful for his service. onona

8 thoughts on “served with pride”