Oh, c’mon Texas, I’m beginning to think y’all are doing this on purpose.

Seriously, y’all have managed to pack an entire psychopathology into three little words: Republican from Texas. I swear, when the next version of the DSM is released there’ll be a diagnostic ladder for Republican from Texas. That three-word phrase has already become shorthand for bone-stupid, delusional, obsessive, and well-armed.

Texas, you started us off slowly (so to speak) with George W. He wasn’t so much stupid as he was intellectually disconnected and entirely unimaginative. But then you doubled down with Rick ‘Good Hair’ Perry, and before you know it we were up to our hips in Louie Gohmert, the Republican from Texas poster boy. Gohmert is so fucking stupid and delusional he won’t tie his shoes because he thinks shoelaces are gay. That’s why he wears cowboy boots, so his laces won’t get gay-married.

But Texas, you’re not satisfied with your Rick Perrys and your Louie Gohmerts. No sir, you have a bench of Republicans from Texas full of goobers, tuna-heads, whack-jobs, and 40 Watt dimwits. Folks who are so loopy that, in other states, they’d be locked in the attic and fed table scraps don’t even get noticed among Republicans from Texas.

Blake Farenthold, Republican from Texas (he’s the one on the right).

No, I’m not kidding. The guy in the blue pyjamas with the yellow duckies? Guys, that’s the United States Representative for Texas’s 27th congressional district. And I’m willing to bet a shiny new nickel that you probably hadn’t even heard of him before. If so, that’s not Congressman Farenthold’s fault; it’s because he’s just not quite as irresponsibly insane as other Republicans from Texas.

Don’t get me wrong, the guy is completely loopy. Just not that loopy, not on the Republican from Texas scale. But he’s trying. Give pyjama-boy credit, he’s trying. At a town hall meeting with his constituents just last weekend, Farenthold was given proof that President Obama committed a felony by being a secret Muslim atheist faggot from Communist Kenya. Proof, mind you — put right into his hand. So why hasn’t Obama been impeached? Farenthold said that was:

“…a question I get a lot. ‘If everyone’s so unhappy with the president’s done, why don’t you impeach him?’ I’ll give you a real frank answer about that. If we were to impeach the president tomorrow, you could probably get the votes in the House of Representatives to do it. But it would go to the Senate and he wouldn’t be convicted.”

Farenthold apparently believes Making Texans Unhappy is an impeachable offense. The House of Representatives would impeach him for that, but those fucking Senators? No ma’am, not gonna do it. Farenthold believes it should have been done a long time ago, and now it’s just too late.

“I think unfortunately the horse is already out of the barn on this, on the whole birth certificate issue. The original Congress when his eligibility came up should have looked into it and they didn’t. I’m not sure how we fix it.”

Oh, if only the original Congress had been patriotic enough to keep that birth certificate equine in the barn! Mitt Romney would be president today, and we’d all be eating crème brûlée while riding on dancing horses. 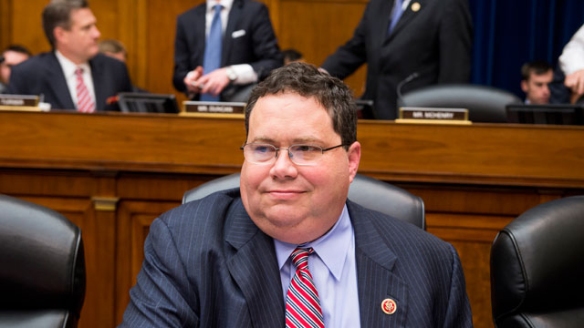 Blake Farenthold, Republican from Texas, legislating his little heart out.

Congressman Farenthold has some serious work to do if he wants to politic with the boys in the big hats. But he’s making the effort. He’s putting himself out there, meeting with his lunatic constituents, saying all sorts of crazy shit and doing it in public. He’s doing all he can to represent his Congressional district and uphold the standards of the Texas Republican Party.

If Blake Farenthold can find the energy to keep this up — and I’ve no doubt he’ll do his very best — he has the potential to some day be known as the Louie Gohmert of South Texas. No dream is impossible.

2 thoughts on “no dream is impossible”