Freeze and melt — that’s been the pattern for the last week or so. Snow, melt, freeze, melt. It’s not so bad on the main streets and sidewalks, which are cleared and have enough car and foot traffic to keep things tidy. But it plays merry hell in the alleys.

A couple days ago I decided to wander back to Save the Date Alley to see if I’d gotten a response to my question. It was pretty treacherous footing. In the sunnier parts of the alleyway the ice and snow had partially melted, leaving a layer of water over the ice. There were occasional patches of snow, which gave a bit of traction, and even a few places with clear concrete — but for the most part, walking in the alley took a lot of care.

It was slick enough that I considered giving up the idea and returning another day. Why risk breaking a bone just to satisfy my idle curiosity? But I could see some sort of construction was taking place down the alley — and it looked suspiciously near the spot where the Save the Date invitation (if it was an invitation) had been left.

I apparently have absolutely no defenses against curiosity, even idle curiosity. I wanted to know what was going on. So I slowly soldiered on.

Until I got distracted by a fire escape. 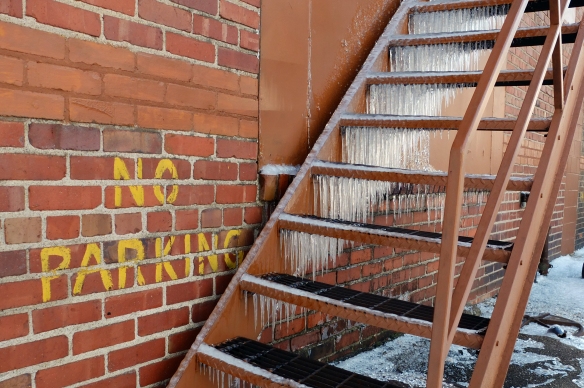 Well, not so much the fire escape itself, which isn’t all that interesting, but by the hundreds of icicles that formed beneath it. I think most folks are fascinated by icicles and how they form. And I suspect most folks feel a powerful impulse to touch them. Or knock them down. Or, of course, photograph them. 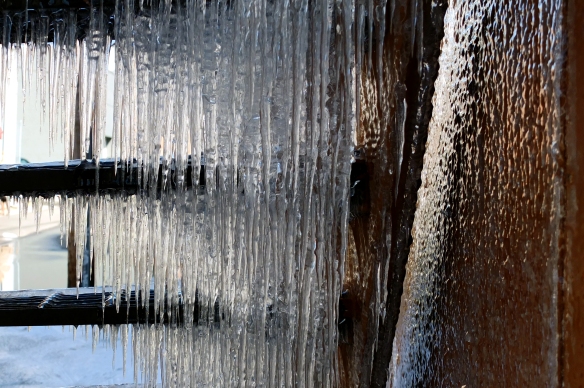 The fire escape was in a shaded part of the alley. I’d been walking on the bright, sunny side. So I had to cross the alley, which doesn’t sound like much of a feat, but lawdy I’m telling you it was incredibly fucking difficult. It took me maybe three or four minutes to slowly slide across maybe ten feet of icy alley. And then, of course, the light sucked.

But I shot a few photos anyway, and even though they don’t give any real sense of how magnificent the icicles were, I’ve decided to include them here. I mean, if I can risk my aging bones to satisfy my curiosity, you can damned well spare a moment to glance at a couple of uninteresting photographs.

The child in me (and yeah, that’s an awfully big part of me) wanted to knock the icicles loose, just to hear the sound. Or at least I wanted to take off my gloves and maybe pull one loose. But the adult in me insisted the responsible thing to do was leave them untouched so the next idiot to slip-slide down the alley could enjoy them too.

So that’s what I did. I made the adult decision, then another three minutes sliding back to the less hazardous side of the alley (there is, I suppose, some irony to be found in the fact that I’m proud to have made an adult decision while in the midst of an entirely juvenile enterprise). And I was back on my way.

Here’s a true thing about alleys: they can be sort of generic. The alley entrance to a radiator repair shop isn’t very different from the alley entrance to an electronics store or a pet shop. So from a distance, it’s not always easy to tell one section of alleyway from another. But as I got closer, it became apparent that the construction was taking place very near the location where Save the Date and my question were to be found.

In fact, it was the very building. 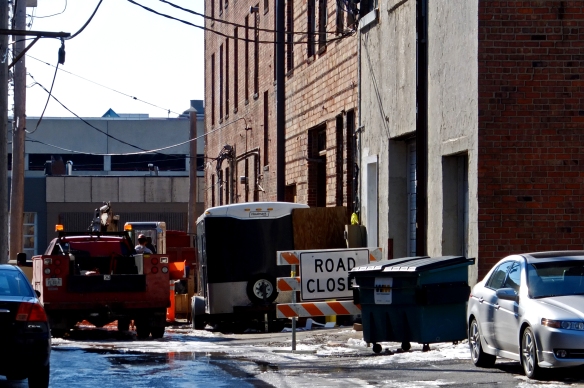 I got as close as I could. I was able see workmen working, but I couldn’t tell what they were working on. I couldn’t see if they were working on the building or on the alley itself or on something altogether different. I tried shouting to get somebody’s attention, but there was a generator banging away loudly and a small diesel-powered Bobcat idling. Nobody heard me. Of else they just ignored me. Either way, I learned nothing.

I made my way back out to the street and approached the construction site from the other end of the alley. No joy there either.

Seriously, I have no defenses against curiosity.

9 thoughts on “no defense”