I’ve been noodling around with computers for about a million years. Seriously, a million years in tech terms. I bought my first computer in the autumn of 1982. It looked like this: 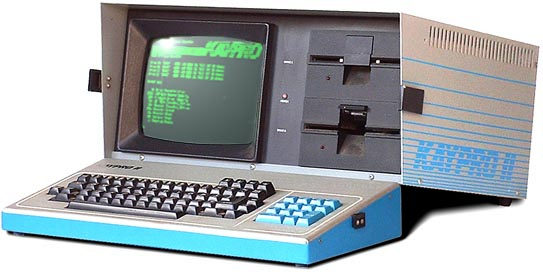 It was a Kaypro II. State of the art, motherfucker — portable (only 26 pounds), with a 9-inch monitor (the Osborne only had a puny ass 5-inch monitor), a CP/M operating system, and two (yes 2)  internal disk drives that could handle those sweet 5 1/4 inch floppy disk each of which was capable of holding 195k of data. Arthur C. Clarke had a Kaypro II. It cost me about US$1500. A few months later I bought a Hayes 300 baud modem; I could put the telephone receiver into a coupler and magically connect with a Bulletin Board System in Boston.

That’s what we had. BBS’s. There was no Internet, no World Wide Web, no information superhighway, no cyberspace — just a green phosphorus monitor linked by telephone to a bulletin board.

Back then I was a geek. I took computers apart, fixed them, replaced and upgraded motherboards and disk drives. But along the way I lost interest in the tech and became more intrigued by the culture and the utility of computers.

Now when I need to do something technical — like, say, hook up my laptop to an external monitor — I have to ask somebody how it’s done. Or find a YouTube video to explain it to me. And when I’ve needed that information, this is who I generally turned to:

Adria Richards. Smart, funny, relaxed, smart, easy-going, knowledgeable, and smart. She’s all over the tech world. If you haven’t heard of her, it’s because you haven’t paid attention.

Richards recently attended a Python development conference called PyCon (okay, here’s where I have to admit I don’t have a fucking clue what Python is). In one of the sessions, a couple of guys behind her began making jokes about ‘forking’ and ‘big dongles.’ You know, the sort of humor common among fourteen year old boys.

I’m a guy. I was once a fourteen year old boy. I still am, sometimes. I know I’ve made similar jokes in my life — because all guys are capable of being idjits. But somewhere in the growing up process I learned not to make jokes around strangers who might be uncomfortable with them. It’s just good manners, right?

This is what Richards says about the incident in her blog:

I was going to let it go. It had been a long week. A long month. I’d been on the road since mid February attending and speaking at conferences.  PyCon was my 5th and final conference before heading home.

I know it’s important to pick my battles.

So women usually let it go. But this time was different. Richards didn’t let it go. This is what happened:

I saw a photo on main stage of a little girl who had been in the Young Coders workshop.

I realized I had to do something or she would never have the chance to learn and love programming because the ass clowns behind me would make it impossible for her to do so.

So Richards sent a tweet describing the situation and asking the PyCon staff to resolve it. And hey, they did. They escorted the two guys out of the session (and, presumably, told them to grow the fuck up). Richards had stood up for herself and women in tech, the guys had been properly put in their place, and the green grass grows all around, all around.

That should have been the end of it. But it wasn’t (otherwise I wouldn’t be writing about it). In her tweet Richards had also included a photo of the guys who were making the jokes. As a result, one of the guys was fired from his job. His company issued a statement, including the following:

[A]s a company that is dedicated to gender equality and values honorable behavior, we conducted a thorough investigation. The result of this investigation led to the unfortunate outcome of having to let this employee go.

That seems an over-reaction. I suspect it would have been more appropriate for the CEO of the company to sit the guy down and tell him not to be such a dick in the future. But here’s something to remember: it was the company that fired him — not Adria Richards.

When word of the firing began to spread, Richards became the villain of the story. Her blog was hit with a Denial of Service attack. She received rape and death threats on Twitter (those tweets have been deleted by Twitter). The company she worked for, SendGrid, also became the target of DoS attacks, shutting it down.

So SendGrid fired Adria Richards. They released a statement:

SendGrid supports the right to report inappropriate behavior, whenever and wherever it occurs. What we do not support was how she reported the conduct. Her decision to tweet the comments and photographs of the people who made the comments crossed the line. Publicly shaming the offenders—and bystanders—was not the appropriate way to handle the situation.

After Richards was fired, the DoS attack stopped and people could access the SendGrid site again.

There is, of course, a huge furor in the tech world over this. I won’t bother repeating all the arguments and counter-arguments; they’re easy to find, if your interested (and they’re all represented in the comments on Richards’ blog post). I’ll just say this.

The civil rights marchers and freedom riders of the 1960s were troublemakers. The first wave of feminists were troublemakers. If troublemaking gay men and lesbians hadn’t pushed hard against the boundaries of hetero-culture, same-sex marriage wouldn’t be a reality in some states (and eventually throughout the U.S.).

Adria Richards got fed up and acted. Did she act wisely? Maybe not. I don’t care. She acted and she caused trouble (even if she didn’t mean to). She shook the foundation of tech culture by telling the guys it’s way way way past time to stop being 14 year old boys.

After this, any guy who publicly makes those sort of jokes at a professional conference will be doing it knowingly and deliberately just to be offensive. And that, folks, is how mainstream bigotry gets driven to the fringes.

4 thoughts on “troublemakers are my heroes”