I’m a big believer in academic freedom. I’ve managed to acquire a handful of degrees from various colleges and universities, and for a brief time I was actually an academic my ownself. When I heard the State of Oklahoma was considering legislation promoting academic freedom, I was understandably pleased.

I said to myself, “Yay Oklahoma!” I started to read HR1674, the Scientific Education and Academic Freedom Act, with a song in my heart. The legislation begins like this:

[A]n important purpose of science education is to inform students about scientific evidence and to help students develop critical thinking skills they need in order to become intelligent, productive, and scientifically informed citizens.

[T]he teaching of some scientific concepts including but not limited to premises in the areas of biology, chemistry, meteorology, bioethics and physics can cause controversy, and that some teachers may be unsure of the expectations concerning how they should present information on some subjects such as, but not limited to, biological evolution, the chemical origins of life, global warming, and human cloning.

This is Oklahoma state legislator Gus Blackwell. Would you be surprised to discover Blackwell is a Republican? Or that he’s a Baptist minister? Or that he’s spent the last two decades employed by the Oklahoma Baptist General Convention?

[N]o student in any public school or institution shall be penalized in any way because the student may subscribe to a particular position on scientific theories.

What does that mean? In effect, it means if students were to write a report claiming climate change is a hoax or arguing that the Earth is only 6000 years old and women were created from the rib of Adam, they couldn’t be ‘penalized’ with a bad grade. In an interview, Blackwell said,

“I proposed this bill because there are teachers and students who may be afraid of going against what they see in their textbooks. A student has the freedom to write a paper that points out that highly complex life may not be explained by chance mutations.”

Blackburn is a jackass, but he’s right about that. A certainly student does have the freedom to write a paper arguing against evolution. But if that paper was written for a science class, then the student should expect a failing grade. Not because the teacher may disagree with the student’s belief system, but because that student would be what we academics call ‘wrong.’

Blackwell and his ilk (yes, there is an entire ilk of jackasses like Gus Blackwell) propose this sort of legislation under the guise of promoting ‘academic freedom.’ I’m sorry to say they know as much about academic freedom as they know about science.

Academic freedom, like evolution or gravity or anthropomorphic climate change, is an actual thing. It has an actual meaning. It’s not a matter of opinion. And it’s got nothing to do with students having the freedom to write papers about humans cavorting with dinosaurs in the Garden of Eden. 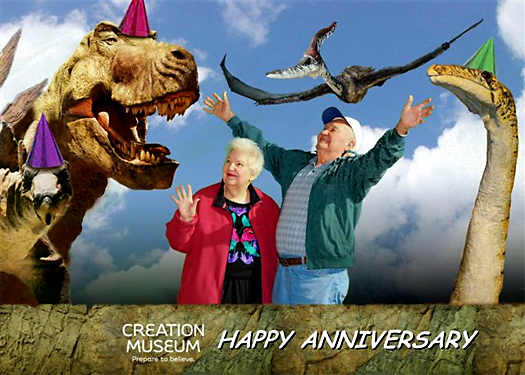 All major universities in the U.S. abide by the 1940 Statement of Principles on Academic Freedom and Tenure, which insures that:

It was academic freedom that enabled Blackwell to attend Oklahoma Baptist University and Southwestern Baptist Theology Seminary and study Baptist theology. Yay academic freedom! But academic freedom doesn’t mean he can legislate that his theology be given equal credibility as science. Boo jackassery!

Happily for Gus Blackwell, though, nobody has proposed legislation limiting his freedom to be a jackass.