It was certainly the most quotable moment in last night’s debate. It was also the most telling moment in terms of Gov. Romney’s qualifications to be president. It was almost embarrassing to watch, but President Obama lost his patience took Romney to school.

Romney, it seems, wants the United States to build a bigger World War II-style Navy in order to fight against…who? The Navy of al-Qaeda? What Romney doesn’t understand is that a Navy built for second generation warfare is pretty much useless against a fourth generation warfare enemy like those we face in the modern world.

First generation war (1GW) was war between nation-states. It was warfare grounded in line and column tactics, both by land and naval forces; it involved bringing superior numbers into battle. 1GW was fought by troops in distinctive uniforms, which allowed them to tell friend from foe in close combat. It was contained warfare, fought in a limited battle-space. For the most part, military operations and wars were won by the side that brought the most men and/or ships to the battle-space.

That was true up until around the middle of the 19th century — the time of the American Civil War — when superior firepower generally replaced superior numbers as the critical factor for victory. Improvements in military technology created Second Generation Warfare (2GW). Troops and ships could attack each from a much greater distance, so the battle-space expanded. More effective weaponry (such as the Gatling gun seen below) allowed smaller units to be more effective. The side that could deliver the most munitions on target usually won the battle. There were always exceptions, of course (in 1GW as well), but no military commander would want to rely on exceptions to win a battle. 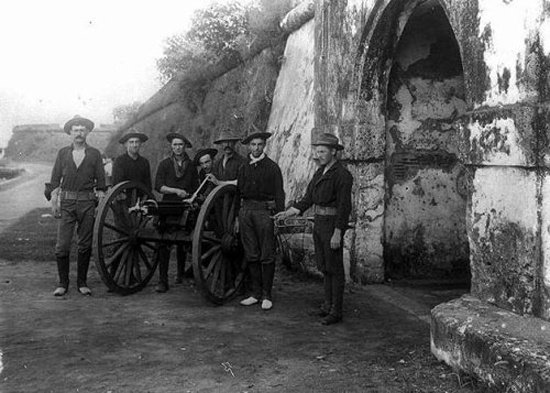 Both 1GW and 2GW depended on a fairly rigid top-down military hierarchy. Generals looked at maps, decided on lines of battle based on terrain and weather, gave orders about troop deployments, and the troops carried out those orders. Obedience and discipline by the troops was essential in order to synchronize troop movements and insure manpower and firepower would be in the right place at the right time. Individual initiative was frowned upon; it disrupted troop unity and synchronization.

Further improvements in military technology, however, stressed the advantages of speed and mobility over firepower, introducing Third Generation Warfare. Where 1GW depended on superior numbers and 2GW depended on superior firepower, 3GW depended on the ability of troop movements that surprised and confused the enemy. 1GW and 2GW relied on strategies that were essentially linear — bring up the troops or weapons, establish battle lines, then slug it out. 3GW, on the other hand, was non-linear. Highly mobile units could simply skip around or over battle lines and attack from unexpected directions.

The German’s Blitzkrieg during the Second World War was all about bypassing stationary targets and attacking where they weren’t expected. The use of helicopters in Korea and Vietnam did the same. 3GW is a war of maneuver rather than a war of territory. It requires generals to trust the initiative and decisions of local commanders, which has the effect of decentralizing the command structure. Instead of being given strict orders, in 3GW local commanders receive a general set of objectives and then decide how best to achieve them.

The wars the U.S. are involved in today, however, are Fourth Generation Wars (4GW). They are in many ways more sophisticated and, at the same time, more primitive. 4GW is no longer restricted to nation-states. Non-state participants (like al-Qaeda in the Muslim world or the FARC in Columbia) are actively engaged in 4GW. The goals of 4GW are essentially cultural rather than political, and therefore it’s highly decentralized. Small groups of combatants, often unaffiliated with any larger group, select objectives and attack them without any direction from a general in a uniform. Tactics considered ‘unacceptable’ to the modern rules of warfare are common and utilized effectively. In 4GW, the enemy is largely invisible until they strike.

The suicide vest, the IED, the hijacked commercial airliner — these are the tools of 4GW. Terror is a tactic, not just because of the loss of lives involved, but because of the disruption of ordinary life. The anxiety sparked by error in civilian populations and among the military in-country degrades our willingness to continue to fight.

Most importantly, the enemy in 4GW isn’t hampered by political realities. In the U.S. the political reality is the Commander-in-Chief needs to be able to give the electorate a timetable for success. 4GW combatants are cultural warriors, and they operate on God’s time. If the U.S. is in Afghanistan for another decade, the remnants of al-Qaeda and the Taliban can carry on fighting their low-intensity war secure in the knowledge that at some point we’ll leave — and they’ll win.

Gov. Romney is locked into an out-moded mindset; he still thinks the biggest military is the best military. He wants to create a 2GW Navy to fight in a 4GW world. When he complains that the U.S. no longer has a military capable of fighting two large scale WWII-style land wars on two separate continents, he fails to comprehend that the world no longer fights those type of wars.

Sadly, what Romney and President Obama both fail to understand is that 4GW has an inescapable moral component. When members of the Taliban deliberately shoot a 14 year old girl in the head for advocating education for girls, people are appalled — but because the Taliban is a decentralized religious movement consisting of a shifting array of participants, the blame gets spread out and diffused. When a Predator drone fires a missile and accidentally kills members of a wedding party, it’s clear the act was committed by the United States and  blame attaches squarely firmly to the U.S. When U.S. Marines are photographed urinating on the corpses of suspected Afghan insurgents, they are seen as representing the United States, whereas if a shadowy cell claiming some loose affiliation with al-Qaeda of Yemen throws acid in the face of a woman for refusing to wear the hijab, they’re not necessarily seen as representing anybody in specific.

Decentralization not only shifts the command structure, it diffuses responsibility for atrocities. For a modern state military force to succeed against a violent non-state participant, it’s necessary to redefine the term ‘success.’ An army or navy can’t root out the cultural ideas of the enemy; they can only offer support for alternative ideas and perhaps give those ideas fertile soil in which to grow.

8 thoughts on “this ain’t your daddy’s navy”