I like to walk. I like to walk without any purpose, without any goal or objective, without any particular destination. But occasionally I walk with the idea of shooting photographs. Most often that happens on a Thursday (largely because I belong to Utata — an international group of photographers who walk on Thursdays; I’ve written about this before: here, here, and here).

So it wasn’t unusual for me to take a walk on Thursday, the 11th day of November, 2016. I needed a walk that day. I needed it because Donald J. (for Jackass) Trump had just been elected President of These United States. A quiet, contemplative walk on a gray, chilly day that seemed to hold the promise of a gray, chilly future.

And that was how I felt even before I got stopped by a police officer. But I’m getting ahead of myself.

I wasn’t really in the mood to shoot photographs, so I didn’t bother to take a camera. Just my cell phone. It was this tire swing that first made me pull out my phone and open my favorite black-and-white camera app. It seemed a perfect metaphor for my mood. Sort of sad, sort of nostalgic, sort of pathetic. Lost innocence and all that.

I was near a semi-industrial commercial area, so wandered over there and strolled along behind the various shops. You know, that area where the shop owners keep their trash and deliveries get made and isn’t meant to attract customers. I’ve always liked the lack of pretense in alleyways and the backs of shops. And, again, it suited my mood.

This wasn’t an actual alley, though it served the same purpose. I’ve wandered along behind these buildings before; it’s always remarkably tidy. The morning light gave it a certain shabby elegance that contrasted well with the bright, functional geometry of the buildings.

At some point I’d stopped thinking about Trump and started to enjoy myself. That’s the thing about photography, isn’t it. It draws you outside of yourself. And that’s especially true, I think, of black-and-white photography, since you’re paying more attention to shape and line and structure. 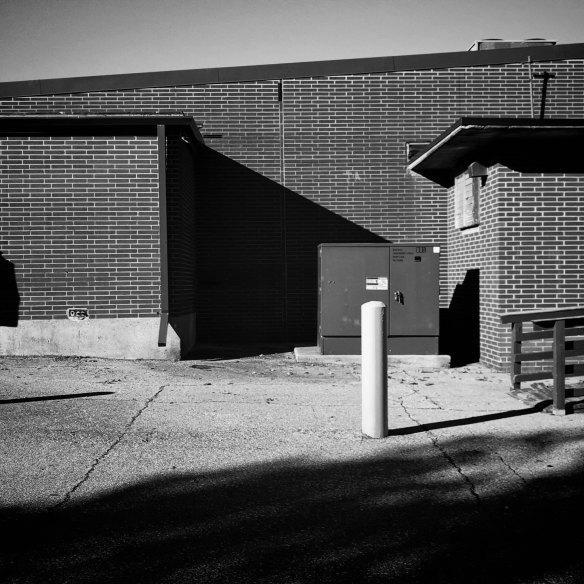 I know this because I actually took those steps to the left and the right before deciding this was the composition I wanted. (I learned to shoot with film, and since film was expensive and processing it was pain the ass, I learned to pay very close attention to composition; get it right the first time, shoot one frame — maybe two — and move on. I’m a stingy photographer.) 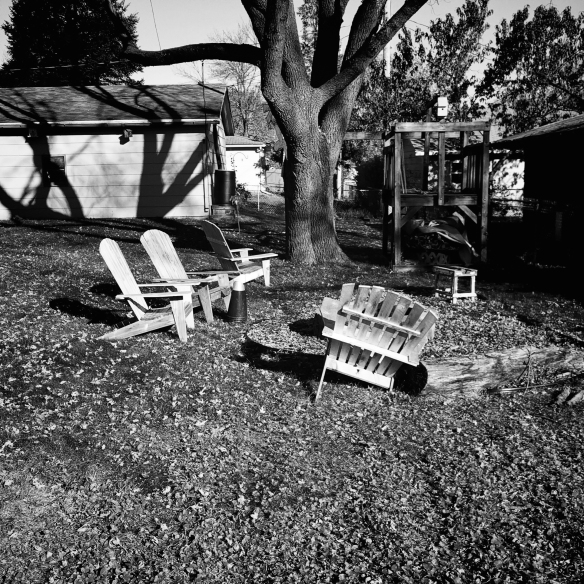 There’s usually a sort of fuzzy area between semi-industrial commercial shops and the more comfortably suburban, well-groomed neighborhoods — an area where the houses might need a bit of paint, where the lawns aren’t quite as tidy, where the kids’ toys haven’t been picked up, where the cars and trucks are a few years older and are showing a bit of rust. It’s the Almost American Dream zone. I grew up in that zone.

Remember that police officer I mentioned earlier? This is where he shows up. I was just about out of the Almost American Dream zone when he arrived. 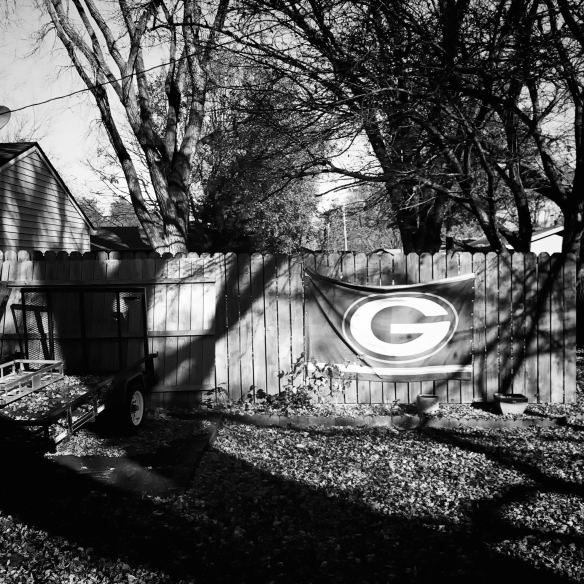 He was very polite. Young white kid, buzz cut, nice smile. He rolled down his window, said “How’re you doing?” I considered telling him I’d voted for Hillary, so how the hell would I be doing. And that’s basically what I said, though I moderated the last bit. He nodded and said he couldn’t believe it either. Then he said something to this effect: “We got a call about somebody walking behind the shops and taking pictures with a phone. That you?”

I admitted it was. He said one of the shop owners was concerned that somebody might be casing the joint (he actually said “casing the joint”), and then asked if he could have my name.

A short digression here. I worked as a criminal defense investigator for about seven years. I’ve been stopped and questioned and actively harassed by police officers more times than I can count. I know my rights. As a pedestrian legally walking along a public way and minding my own business, I’m not required to identify myself to the police. However, if the officer is investigating a possible crime it becomes a tad tricky. And given that there might be some dispute whether the area behind these particular shops is a public way, it becomes a tad trickier. So I told the officer I was going to reach into my pocket and get my wallet (as a white guy, the odds that the police would shoot me for reaching for my wallet are really really really slim — but still).

I showed him my driver’s licence. He asked the obvious question. “Why were you taking pictures behind those shops?” So I told him. Thursday walks, Utata, light and shadow, alleyway geometry. 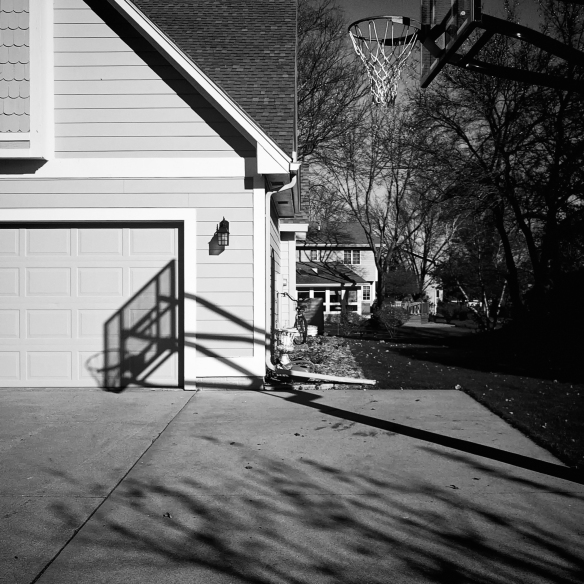 Then he asked the really difficult question. “Can I see your photos?”

On the other hand, I didn’t want a fuss. Hillary had just lost the election; I didn’t have the energy to make a passionate civil liberties argument. So I offered a compromise. I told the officer I was reluctant to show him the photos as a matter of principle, but I understood why he wanted to see them. I said “If you agree that you have no legal right to see the photos, I’ll show them to you.”

So I took my phone back, turned and shot the photo of the basketball hoop and shadow, and showed it to him. He asked for the name of the app. Then I asked if I could take his photo, and he said this (or something like this): “You have the right to take my picture so long as it doesn’t interfere with the performance of my duties…but I’d rather you didn’t.”

Postscript: I began to write about this on the day it happened. But the sad fact is, I was still too discouraged about the election to write more than a couple of paragraphs. I’ve noodled around with this post off and on, but I’m still pretty gutted by Hillary’s loss — and seeing these photos reminded me of how grim I’ve felt since the election. It reminds me of how much stuff I’ve put off, how many things I’ve been procrastinating about, how much normal stuff I’ve been avoiding.

I had a good encounter with a police officer — something positive happened to me — and I just couldn’t maintain that feeling. That sucks. It has to change. Maybe finishing this and publishing it is the spark I need. And now I suppose I have to append the ‘confessional crap’ tag to this. I hate confessional crap.