The best thing about last night’s debate? It perfectly encapsulated both candidates. It was a distillation of the qualities and defects of both Hillary Clinton and Donald Trump.

Clinton did what she’s done her entire life. She prepared. She studied, she armed herself with facts and figures, she practiced, she devised various strategies for different possible scenarios. When she walked out on stage she was confident, in control, ready to debate. She knew what to expect and was ready to deal with it.

And Trump did what he’d done his entire life. He winged it. He didn’t bother to study, he didn’t prepare, he didn’t practice. He figured he knew what he needed to know and assumed his ability to out-talk, out-negotiate, and out-bamboozle his opponent would be enough for him to succeed. When he walked out on stage he was cocky, but sadly unprepared. He had no idea what he was in for, and didn’t know how to handle it. 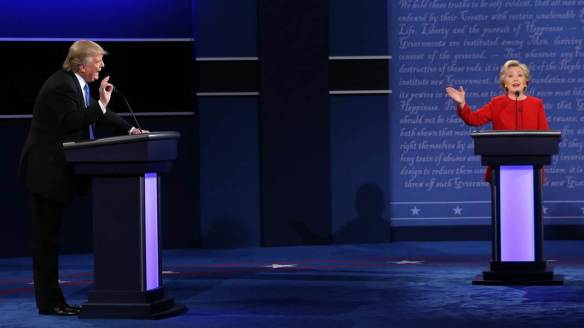 Why was he so unprepared? The qualities that have allowed Trump to be successful at business simply aren’t the qualities needed to win a debate with a serious candidate (or to run a democratic nation). When Clinton accused him of ‘cheering’ the housing crisis, Trump truthfully and accurately replied “That’s called business.” When she accused him of paying zero federal income tax, he said “That makes me smart.” When she referred to the Justice Department’s lawsuits against Trump for racial discrimination, he said, “[Y]es, when I was very young, I went into my father’s company, had a real estate company in Brooklyn and Queens, and we, along with many, many other companies throughout the country — it was a federal lawsuit — were sued. We settled the suit with zero — with no admission of guilt. It was very easy to do.” When she brought up his multiple bankruptcies, Trump said, “I take advantage of the laws of the nation because I’m running a company. My obligation right now is to do well for myself, my family, my employees, for my companies. And that’s what I do.”

And there it is; that’s what he does. More accurately, that’s what his lawyers do. Profiting off home foreclosures — that’s business. Not paying taxes — that’s smart. Settling a discrimination case without an admission of guilt — easy. Avoiding liability by declaring bankruptcy — just taking advantage of the law. That’s why you hire lawyers, right?

That’s what got left out of all those exchanges last night — Trump’s lawyers. When he talks about his successful business negotiations, what he really means is he has enough money to hire good lawyers. He doesn’t have to go to the negotiation table prepared; his lawyers do all the preparation. He doesn’t have to know the details of the issue; he’s hired people to do that for him. He can sit in a room with business opponents and, in effect, say “This is what I want; this is how it’s going to be.” But then he leaves the room and lets the lawyers pound out the details. Trump’s lawyers have made him a lot of money. Trump seems to think having a lot of money and a lot of lawyers is the same as being smart and powerful.

Last night we saw one candidate who was willing do the dull, un-glamorous grunt work necessary to succeed. We saw the other candidate who was largely lost at sea without a cadre of legal fluffers doing the hard work for him. Last night Trump failed to bring his checkbook and his team of lawyers (and maybe Sean Hannity) to the debate stage.