This may be the year when we finally come face to face with ourselves; finally just lay back and say it — that we are really just a nation of 220 million used car salesmen with all the money we need to buy guns, and no qualms at all about killing anybody else in the world who tries to make us uncomfortable. — Hunter S. Thompson, Fear and Loathing on the Campaign Trail

Now the Republican party can drop all pretense of being serious about governance. Or diplomacy. Or hell, pick something. The GOP just isn’t a serious political party. They’ve become a frat house for assholes.

They’re pretty ecumenical when it comes to assholes, I’ll give them that. Assholes of all stripes are welcome. Religious assholes (“I’m not perfect, I’m just forgiven!”), economic assholes (“Tax breaks for the rich, fuck the poor!”), militaristic assholes (“Carpet bomb mosques, build more Hobby Lobbys!”), racist assholes (“Hey, somebody has to mow the lawns!”), stupid assholes (“Why can’t we make the Second Amendment the First Amendment?”), sexist assholes (“That was a compliment! What’re you, a lesbian?”), and free range raging assholes of all sorts. If you’re an asshole, Trump wants your vote. 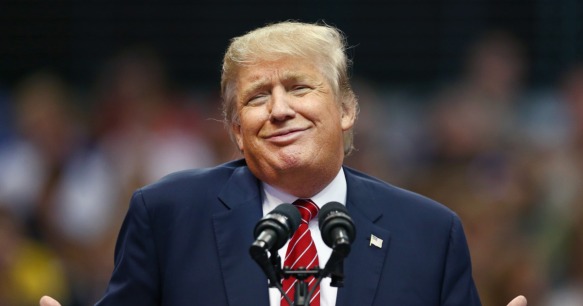 Like I should care what sort of asshole you are? Just vote already.

Of course they picked Trump. He’s the distillation of the Republican party. There’s nothing surprising about it. Nothing strange about it. It’s not weird; it’s wyrd.

Okay, today’s etymology lesson. The modern term weird is derived from the Anglo-Saxon wyrd, which means something like destiny or fate — but more complex. Wyrd doesn’t refer to something preordained, something that is meant happen. It’s more a constantly evolving and shifting nexus of individual choices and decisions melded with the necessities of the universe. The wyrd brings various elements together, then riffs on whatever crazy-ass stuff happens next. It’s a sort of Viking jazz improv version of fate or destiny.

It’s like this: fate didn’t bring Buffy Summers to Sunnydale, home of the Hellmouth. It was the wyrd. There was a pool of potential Vampire Slayers out there in the world, and the universe needed a Vampire Slayer parked at the Hellmouth. The universe didn’t care who the Vampire Slayer was, or what supernatural lottery ticket had to be cashed in to become the Slayer. The universe didn’t care what actions and decisions (like, say, burning down a high school in Los Angeles) would bring the Slayer to Sunnydale. A Slayer was needed in Sunnydale; the wyrd got one there. It happened to be Buffy.

Wait, what? They’re nominating who?

Donald Trump wasn’t preordained to destroy the Republican party, and the Republican party wasn’t preordained to be destroyed. But the wyrd is at work. In a couple of months the GOP national convention will meet in Cleveland (city of light, city of magic — as Randy Newman says) and not even the wyrd knows what will happen. Maybe Trump will be given the nomination, maybe establishment Republicans will somehow nominate some other poor bastard, maybe the sun will turn black and Trump will transform into a giant snake who will be killed with a mystical knife wielded by Elizabeth Warren. Who knows?

Regardless, it looks like the GOP — the frat house of assholes — is about to die. Not even the wyrd can say what will happen. But we know where and we know when, and I know I’ll be watching. Because, to paraphrase Hunter Thompson, when the going gets weird, the wyrd turns pro.

Burn on, big river, burn on.