It’s OMG IOWA CAUCUS time. Local, national, and international news teams have taken every damned seat in every damned coffee shop, saloon, burger joint, and opium den in Des Moines. They’re swarming the city with all the desperate, unthinking energy of spawning salmon. They’re trolling for news, and it ain’t pretty. It makes it difficult to maintain a steady stream of thought. So I’m not even going to try.

Here’s the random crap that’s banging around in my head like a dried pea in a tin cup while I try to eat lunch.

Random Crap One: I am reliably informed that New Jersey Governor Chris Christie is “is within striking distance” of the lead in the Republican race. He’s polling at six percent support. Six percent. And the news media is so frantic for ‘news’ they’ve decided that’s striking distance. Hell, the Zika virus is polling at seven percent. More people would rather be infected with Zika than have Christie as President of These United States.

Random Crap Two: I saw maybe three minutes of the most recent Republican Debate. Three minutes, one question. Nemesis Megyn Kelly asked Marco Rubio how he’d handle the problem of undocumented immigrants entering the U.S. This was (and I’m not making this up) Rubio’s response:

That’s exactly how he’s going to deal with undocumented workers — by keeping ISIS out of America. There are plenty of under-employed white American terrorists looking for bird sanctuaries to occupy. We don’t need foreigners taking jobs that should rightfully go to decent, hard-working, well-armed Americans. 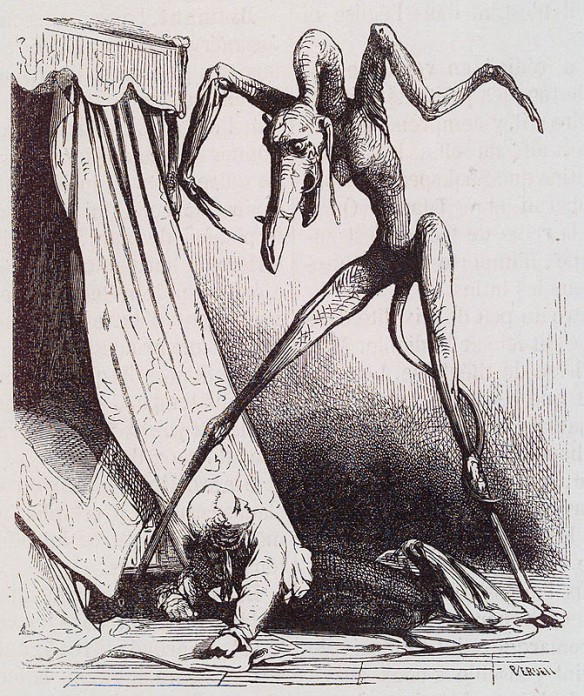 Random Crap Three: Louis Gohmert, the human equivalent of the Zika virus (in that when he speaks, he’s capable of causing brain damage) informs us that evangelicals like Donald J. Trump because (and again, I’m not making this up) they’re…

“sick of the nation being fundamentally transformed away from being a Christian nation.”

Gohmert (who is engaged in a heroic quest to discover and exploit brave new worlds of stupid) has apparently read all the bad parts of Ivanhoe (or had somebody read it to him).

“Holy Mother,” said the monk, as he addressed the assembled knights, “I am at last safe and in Christian keeping!”

“Safe thou art,” replied De Bracy; “and for Christianity, here is the stout Baron Reginald Front-de-Boeuf, whose utter abomination is a Jew; and the good Knight Templar, Brian de Bois-Guilbert, whose trade is to slay Saracens—If these are not good marks of Christianity, I know no other which they bear about them.”

Good marks of Christianity, right there in the bloviating figure of Trump. An endorsement by Gohmert carries all the weight of an endorsement by Karl Turley (Karl works at the local Stop&Rob up the street — nice guy, flunked out of his first semester studying HVAC at the community college).

Random Crap Four: There’s a Super PAC called Black Americans for a Better Future. It’s described as “the first and only [Super PAC] dedicated to attracting African-Americans to the Republican Party.” Its goal is “to counter those liberal organizations that receive an inordinate amount of media attention and to present a counter narrative” to liberal groups. According to the group’s first speaker,

“Having well trained, credible, experienced African-Americans constantly challenging the liberal orthodoxy in the media will create a tectonic shift in the perception of the Republican Party within the Black community.”

Guess who  BAFBA is supporting. Go on, guess. No, not Donald Trump, are you crazy? No, they’re supporting Ted Fucking Cruz. Seriously, I’m not making that up. Does that sound crazy? Maybe this will help. This is the guy who created BAFBA:

You may have noticed that Robert Mercer is…well, white. In fact, every donor to BAFBA is equally white. Every single one. The donor pool for BAFBA is whiter than the Oscar acting nominees. Ted Fucking Cruz, I declare, wouldn’t it be great if a liar’s pants really did catch on fire?

Random Crap Five: Conservatives are upset that there are new Barbie dolls with new body shapes. Why are they upset? Because apparently it’s political correctness run amok. I’ve noticed that political correctness, when it’s not being jammed down throats, is always running amok. I don’t think it knows any other way to run.

It’s only a matter of time before Trump, Rubio, and Cruz compete to see who’ll work harder to keep the new Barbie dolls from crossing the border.