I declare, I simply cannot afford the amount of alcohol that would be required to look at this week’s news without becoming a model for an Edvard Munch painting. But here are the highlights.

This guy wants to keep Syrian refugees out of Texas because it would be too easy for them to buy guns and commit acts of terrorism. I can’t even count how many things are wrong in that statement. On the other hand, we’re talking about Texas state politics. You know, the place Saint Molly Ivins called ‘America’s laboratory of bad government.’

This guy, Tony Dale of Texas.

This next guy? He’s one of two Marksville, Louisiana deputies who killed a five-year-old boy in an ongoing feud between a city court judge and the city’s mayor. The mayor, a mechanic who also own an auto parts shop, wanted to tighten the city’s budget — which meant, in part, reducing the judge’s salary and the court’s operating budget (which is funded in some measure through issuing traffic tickets). The city’s marshal then hired some part-time deputies to issue more traffic tickets to bolster the courthouse budget. One of those deputies was this guy — Derrick Stafford, who before becoming a deputy was charged twice with aggravated rape. Stafford’s defense lawyer in those cases was the man who is now the Marksville city judge. As a deputy, Stafford has racked up five excessive force lawsuits.

It would require some combination of a Southern Gothic flowchart and a Chinese abacus to understand the arcane connection between the mayor, the judge, the deputies, the six-year-old victim’s father, and the victim himself. But lawdy, this guy.

And there’s this guy, who is unaccountably running for President of the United States. He recently accused the actual president of not wanting to defend the United States against terrorism, but is now offended that President Obama criticized those who wanted to close the borders to Syrian refugees. Obama said, “That’s not American, it’s not who we are.” Despite the fact that Obama mentioned no names, this guy whines that the president “just called me offensive the day before he called me un-American.” He then went on to say this (and I’m not making this up):

I hope Obama comes back (he’s in Paris at the moment) and insults him to his face, which this guy so richly deserves.

And speaking of presidential candidates, there’s this guy, who is opposed to the idea of a free college education. He argued that free education was insidious and dangerous. Well, let’s let this guy explain the risks his ownself:

“Frogs,” an audience member shouted out.

“The frogs. You think it’s warm, and it feels pretty good and then it feels like you’re in a whirlpool—you know, a Jacuzzi or something. And then you’re dead. That’s how this works.”

That’s how free college education works, according to this guy. Lawdy. 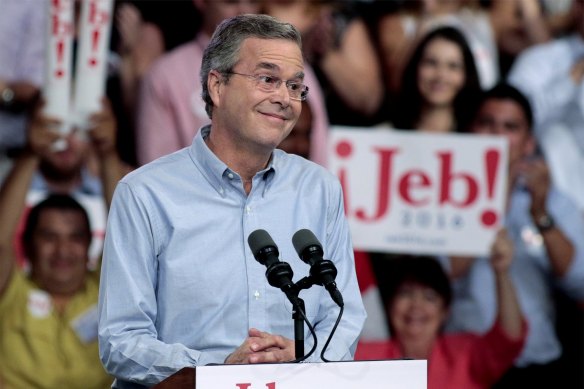 This guy, the ‘smart’ Bush brother.

By this point I’m just bemoaning my impoverished state on account of I want to steadily drink the rest of this year away. But…there was this guy.

This guy? He’s a football player. Football players are not known for their sensitivity to race. Or ethnicity. Or gender or sexual orientation. Or any fucking thing at all, really. But this guy? Before Sunday’s football game the stadium held a moment of silence for the victims of the Paris attacks–and some fuckwitted Packers fan used that moment to shout out some anti-Muslim bullshit. And after the Packers lost (for which I blame that fan), this guy had a few words to say about the Moment of Silence and the fan who fucked it up.

Oh, and also that little kid. You know, the little French-Asian kid and his charming daddy? In Paris? The one who talked about the bad men with guns, and the flowers and candles? Yeah, that one. Listen to him too.

7 thoughts on “this guy, seriously”