Okay, let’s play a game. I give you a scenario, you decide if the person in the scenario ends up dead or not dead. It’s fun!

Scenario 1: Police in Denton, Texas respond to a report of an angry man with a rifle. On arrival, they find a 22-year-old man carrying a loaded AR-15 semi-automatic rifle is confronting a 69-year-old protester carrying a sign. The armed man, described by witnesses as ‘unreasonable and agitated,’ is white. Is he Dead or Not Dead?

NOT DEAD! The police requested the armed man carry his rifle slung over his shoulder and allow him to leave without shooting him anywhere at all.

Scenario 2: Police in rural Georgia pull over a driver for an ‘unspecified traffic offense.’ According to the police, the 30-year-old man immediately “exhibited aggression toward the officers.” The driver identified himself as belonging to a radical group with a long history of violence against law enforcement officers. When ordered out of the vehicle, the driver reached for a gun. The police officers, fearing for their safety, responded by breaking the car window and forcibly removing the man — at which point the man reached for a second gun holstered in the small of his back. The driver is white. Is he Dead or Not Dead?

Scenario 3: Cleveland police respond to a telephone report of a person with a gun in a local park. The caller stated the person “is probably a juvenile” and described the gun as “probably fake.” On arrival, the police confront a 12-year-old boy with an Airsoft gun. The boy is black. Is he Dead or Not Dead?

DEAD! The police shot the boy twice in the first two seconds after exiting their vehicle. They also failed to perform any first aid. He died the following day. 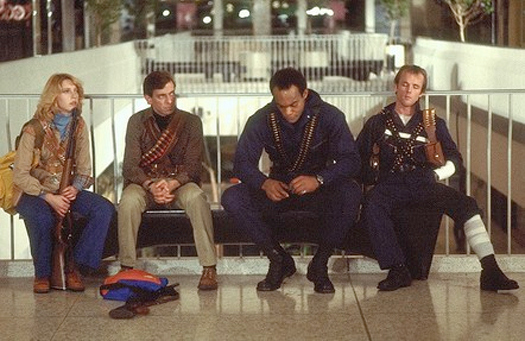 Your turn to play! Three of these contestants will be Not Dead! Which one will fail to make it to the next round? Dead or Not Dead!

Scenario 4: Kalamazoo police respond to multiple reports of an intoxicated man on a busy street carrying a rifle and shouting obscenities and threats of revolution. They arrive to find a 63-year-old man who refuses their orders to drop his weapon. Michigan is an ‘open carry’ state, which allows citizens to openly carry firearms. The man is white. Is he Dead or Not Dead?

NOT DEAD! The police spent forty minutes discussing the 2nd Amendment with the drunk man, failing to shoot him at all. He eventually agreed to surrender his rifle — which was returned to him by the police on the following day.

Scenario 5: Police in Beavercreek, Ohio respond to a report of a man with a gun in a local Wal-Mart. On arrival, the officers observe a 22-year-old man carrying a firearm in a non-threatening way and talking on a cell phone. They order him to drop the weapon. According to the police, the man doesn’t immediately do so. Ohio is an ‘open carry’ state, which allows citizens to openly carry firearms. The man is black. Is he Dead or Not Dead?

DEAD! The gun was a BB gun the man had picked up in the Sporting Goods section of Wal-Mart. The man was shot twice within moments of being confronted by police.

Scenario 6: New Orleans police respond to a report of an armed man breaking into a home, threatening the occupants, stealing some of their possessions, and firing a shot through the window before escaping. As he’s running away, the gunman threatens a number of nearby construction workers. Officers give chase to the 19-year-old man, who soon accosts a man in a pickup. The man and his five year old son managed to avoid injury although the gunman fires five shots at them, striking the windshield, the rear window, and the truck’s fender. The police manage to catch the gunman, who points his handgun at them. They order him to drop his weapon. He refuses, telling the police, “No, you drop your fucking guns.” The gunman is white. Is he Dead or Not Dead?

NOT DEAD! The police managed to catch him and arrest him without shooting him even once.

Come on,. America! Join in on the fun! Dead or Not Dead. New contestants every day! Look for DoND in your hometown! It’s America’s hottest game!

3 thoughts on “dead or not dead! it’s america’s game!”