I love fútbol. I love the game and I love the term fútbol. It just sounds and looks so much more interesting than either ‘football’ or ‘soccer’. Plus fútbol more appropriately reflects the international nature of the game.

So I’m completely over the moon that, in just over a week, the Women’s World Cup will begin in Canada. And I’m completely pissed off about the way the best women fútbol players in the world are being treated.

There has never, in the entire history of the World Cup, been a match played on artificial turf. Until now. All of the venues in which the Women’s World Cup will be played this year have artificial surfaces. That’s bad — bad for the players and bad for the game.

It’s bad for the players because playing on artificial turf increases the chances for injury. We’re not just talking about turf burns, which may seem relatively minor (but aren’t); we’re talking about serious injuries. There are more ankle injuries — some of which might only slow a player down, some of which might cause a player to miss a game, some of which might end a career. Artificial turf can cause a metatarsophalangeal joint sprain — more commonly known as ‘turf toe’ — in which a player’s big toe becomes hyper-extended. Have you ever had a toe injury? It changes the way you walk (assuming you can even wear a shoe), so imagine how it affects a player in a running sport. And if that’s not bad enough, playing on artificial turf increases a player’s chance of concussion. That’s true even for American football players — and those guys wear helmets.

It’s bad for the game because the increased risk of injury affects the style of play. Here’s what Heather O’Reilly — a midfielder on the US team — had to say about playing on artificial turf:

“Slide tackling on grass – you know, you get up, you shake the grass off, get the dirt off. On turf unfortunately, a little layer of your skin comes up with every slide tackle so you get turf burns. Those diving headers that are so exciting on the world stage aren’t going to happen on artificial turf because you can get injured. So it changes the game quite a bit.”

Another problem is the ball moves quite a bit faster on artificial turf. That means more balls going out of bounds, which translates into more throw-ins, which results in less action on the field. The rhythm and fluidity of the game changed.

Let me say it again. Playing fútbol on artificial turf is bad for the players and bad for the game. Here’s former Canadian national team player Carrie Serwetnyk on the issue:

“[The decision to use artificial turf] like saying that women’s Olympic track would be taking place on a cinder track instead of a rubber one.”

It’s pretty much unthinkable that the same decision would be made in the men’s World Cup, or in any of the qualifying matches. So why is the Women’s World Cup being played on artificial turf? Because FIFA, the organization that runs international fútbol, has no respect for women as athletes. That’s it. That’s the entire reason.

How do we know that? Because when the women players learned they’d be playing on artificial turf, they complained to FIFA. Sixteen months before the World Cup starting date, more than 70 top-ranked players from at least 17 national teams signed a letter, asking FIFA to insist on grass surfaces. FIFA ignored them. So the women sued FIFA, accusing them of gender discrimination, arguing that men’s teams would never be forced to play on an artificial surface instead of natural grass. FIFA refused to publicly address the lawsuit, and stalled. Eight months ago the women asked the court for an expedited hearing, since the turf would have to be changed before the games began. FIFA continued to stall and refused all attempts to negotiate. According to their lawyer, some of the women involved in the suit were threatened with suspension from their local governing bodies.

In January, when it became clear nothing was going to happen, the women withdrew their suit to concentrate on preparing for the World Cup. FIFA didn’t comment. 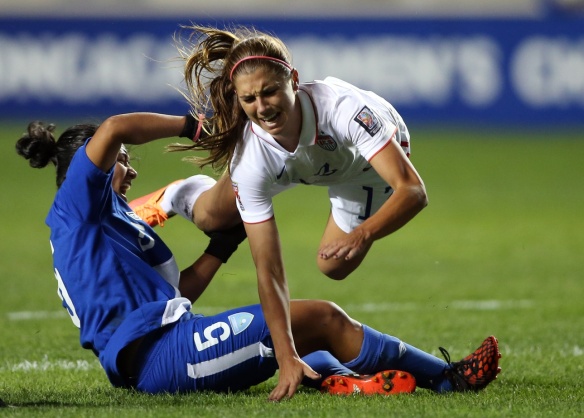 How much would it have cost for FIFA to equip the World Cup 2015 stadiums with grass? Between three and six million dollars. Money wasn’t the issue. The issue was the health and safety of the women players. The issue was respect.

7 thoughts on “i love fútbol — i fucking hate fifa”