So I’m delighted to say that today I have nothing but praise for one specific Republican from Texas. I’m talking about former Texas State Representative Todd Smith of Euless (which, by the way, is also known as ‘Tree City USA’.and which, I’m reliably informed, ranks ninth in the percentage of same-sex couples among cities in Texas — two facts that are completely unrelated. Which is a good thing, otherwise Republicans in Texas would likely engage in radical deforestation).

Why am I praising Republican Todd Smith? I’m about to tell you. But first, let’s chat a bit about Jade Helm 15. If you aren’t familiar with Jade Helm, let me first assure you it’s NOT the name of a Marvel Comics superhero. It’s actually a U.S. military training exercise scheduled to take place over a couple of months this summer. Similar exercises have been run in the United States for decades. But we live in Lunatic Times, which means there are a LOT of really stupid, paranoid people (almost all of whom belong to one or another febrile subset of the Republican party) who see Jade Helm as a strategy by our Muslim Kenyan president to…well, the true purpose of Jade Helm depends on which conspiracy theory you prefer to see revealed in ALL CAPS!!!

Here are some of the favorite theories. Jade Helm is a plot to: 1) Give Texas back to Mexico, 2) Impose martial law on…somebody, probably Texans, but can you trust Obama to stop there?, 3) Allow Baraq Hussein Obama to seize control of the entire nation, cancel the presidential elections, and declare him Dictator For Life, 4) Disarm patriotic, freedom-loving gun-owning white Christian patriots and intern them in FEMA camps, 5) Prepare a staging area in the American Southwest for Chinese troops to invade across the Mexican border, 6) Same scenario, only with Russian troops who’ve been arming Mexican drug cartels, 7) Same scenario, only with drug cartels and Islamic terrorists who have been training together for months in Juarez, 8) Same scenario again, only with United Nations peacekeeper troops.

The evidence for these plots? Somebody spoke to a guy who is a former SEAL who says he saw a train with cattle cars fitted out with shackles. This completely reliable information can only mean the government is going to arrest Christian patriots and haul them to indoctrination camps. Also, Wal-Mart has closed several stores because of “plumbing problems”. Obviously this is a ruse. In reality, those stores are being converted into food distribution centers to feed the invading Chinese/Russian/drug cartel/ISIS/United Nations invasion troops. Also too, the US military has announced its intentions to operate this so-called “exercise” as a means of pacifying resistance, and they’ve asked permission from both State and County governments to conduct the exercise in their territory — and that’s completely fucking suspicious. Also too plus in addition, when asked about Jade Helm, military spokesmen claim it’s just a harmless exercise — and they are liars, because it’s perfectly clear that:

For years now, our veterans, Christians, patriots, gun owners, constitutionalists, pro-life advocates, small government supporters, small businesses, real journalists in the press, anti-corruption activists, anti-UN Agenda 21 advocates, anti-global warming supporters, anti-war patriots, anti-criminal immigration supporters, have all been targeted by this administration as enemies of the United States, even within government documents. Are we supposed to trust that they have pure intentions now?

Clearly, the people who believe any of these theories — or even spend a moment seriously considering them — are totally fucking nuts. Or suffering from some sort of terminal prion disease. Or both. 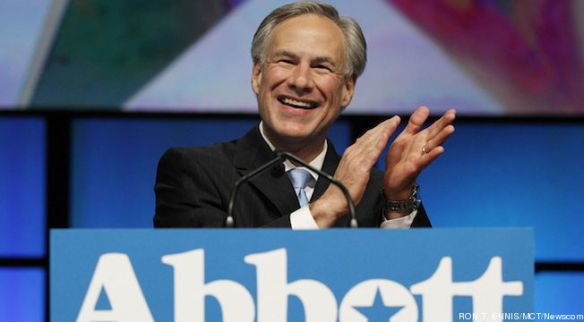 One of those people is Greg Abbott. A lot of folks confuse Greg Abbott with Bud Abbott. Easy mistake to make. Bud Abbott was the chubby putz who was half of the classic comedy team of Abbott and Costello. Greg Abbot is the putz who is the newly elected Governor of Texas. Gov. Abbott, concerned for the “safety, constitutional rights, private property rights and civil liberties” of Texans, ordered the Texas State Guard to monitor the military exercise.

And that finally brings me to Todd Smith. Smith served 16 years in the Texas legislature. He’s a solidly conservative Republican. And he just wrote the best goddamned letter to Greg Abbott. Granted, Smith’s prose is a tad convoluted, but it’s the thought that counts, right? I’m going to print the letter in its entirety. It’s that good.

Let me apologize in advance that your letter pandering to idiots who believe that US navy Seals and other US military personnel are somehow a threat to be watched has left me livid. As a 16 year Republican member of the Texas House and a patriotic AMERICAN, I am horrified that I have to choose between the possibility that my Governor actually believes this stuff and the possibility that my Governor doesn’t have the backbone to stand up to those who do. I’m not sure which is worse. As one of the remaining Republicans who actually believes in making decisions based on facts and evidence — you used to be a judge? — I am appalled that you would give credence to the nonsense mouthed by those who instead make decisions based on internet or radio chock jock driven hysteria. Is there ANYBODY who is going to stand up to this radical nonsense that is cancer on our State and Party? It is alarming that our State Republican leadership is such that we must choose between DEGREES of demagoguery. I know that in many cases you are the better of the two demagogues (see the Lieutenant Governor driven nut job rant regarding your Pre-K program as a recent example). Having been there, I also know that politicians are not always able to speak their mind because they represent large groups of people and not just themselves. But this bone that you have thrown to those who believe that the US Military is a threat to the State of Texas is an embarrassing distance beyond the pale. You are Governor of Texas! This is an open request–from a ghost of our State’s recent Republican past–that you act like it. Enough is enough. You have embarrassed and disappointed all Texans who are informed, patriotic Americans. And it is important to rational governance that thinking Republicans call you out on it.

And he signs it sincerely. How great is that? Pretty great, is how great.

I’m confident I’d have some serious ideological and political (and grammatical) differences with Todd Smith, but at long last there’s a Republican (and one from Texas) who is calling bullshit on these lunatics and the Fuckwit Collective politicians who pander to them.

5 thoughts on “in which i praise a texas republican”