Okay, yeah…it’s a tragedy. The two-year-old who accidentally shot and killed his momma in a Hayden, Idaho Walmart. The toddler who managed to find his momma’s handgun in her specially-designed-to-carry-a-handgun purse, then squeeze off a single round that hit his momma in the head. It’s a complete, horrific, total tragedy.

It’s a tragedy that poor kid will have to relive over and over. As he grows up he’ll want to know how his momma died. As he gets to know new people — at school, at college, at work — they’ll ask about his family. He’ll have to tell — or think about telling — the story of how he accidentally and inadvertently killed his own momma thousands of times. It’s unspeakably tragic.

It happens because kids are curious. They play with things. They want to handle new things. It’s what kids are supposed to do. They see things, they pick them up, they explore them. Toys, guns, fruit, dog turds, cell phones, staplers, doesn’t matter — kids will pick them up and mess around with them.

It happens because kids learn really early about how to hold and shoot a handgun. They may not understand exactly what a handgun does, but by the time they’re toddlers they’ve seen tens of thousands of images on television and in movies of people holding guns. Kids learn by imitation. Of course they’re going to play with a gun if they find it.

It happens because that’s what guns are designed to do. Kill things. Firearms really are an incredibly efficient technology. Masterpieces of design. Their only function — and let me repeat that; their only function — is to explosively propel a missile at high speed toward a target.

It happens because here in These United States we have a gun fetish problem. We have a culture that romanticizes firearms, and celebrates the people who use them. We have a culture that places a higher priority on firearm ownership than on health and safety. We’ve created a culture of fear and suspicion that’s so pervasive, some folks actually believe it’s necessary to be armed to visit Walmart. 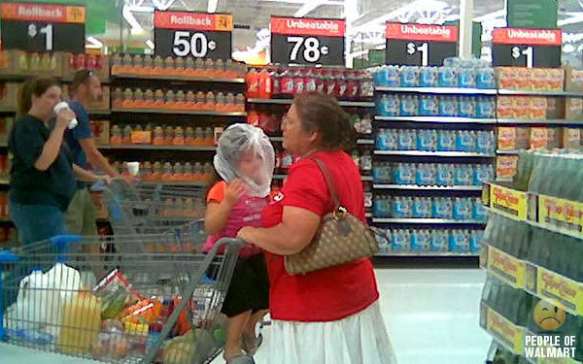 So yeah, it’s tragic that a two-year-old boy accidentally shot his momma in the head while they were shopping at Walmart. But that shit happens all the time. And nothing will change because of it. And that, of course, is the deeper tragedy.

Editorial note: You can buy a large assortment of firearms and ammunition at Walmart; their prices are unbeatable.

2 thoughts on “a tragedy”