Let’s just acknowledge that everybody’s life is weird. They’re all weird in different ways, sure — but the weirdness is there. It’s built into the system; you can’t get around it. Most of the time we don’t even notice the weirdness of our own lives. It’s so much easier to see the weirdness of other folks.

Today, though, some of the weirdness of my life bled through. First off, it’s my birthday. That’s not a big deal and there’s nothing weird about it. Everybody has a birthday. The only thing weird about mine is that I happen to be house-sitting for my brother (who is larking about on the beaches of Puerto Vallarta), so I’m sitting here alone in a strange house that’s decorated with about a thousand snowmen. Not actual snowmen (nor those creepy-cool snowmen from Doctor Who), just holiday decoration snowmen. 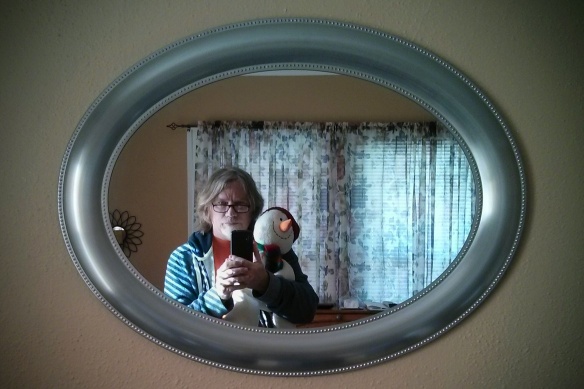 It’s also a little weird to get a lot of birthday greetings. The greetings themselves aren’t particularly weird (well, some of them are a tad weird), but as I read through them all I’m reminded that I have a pretty odd range of friends and acquaintances. Lots of writers, lots of artists, lots of librarians, some lawyers, some regular working folks, a few gun nuts, a few scientists and mathematicians, a former nun, lots of tech-related people, some folks who work as advocates for mostly lefty causes. There are more women than men, more liberals than conservatives, more straight folks than gay, more folks from the US than any other place, but all in all it’s a pretty eclectic group.

Most folks just say ‘Happy birthday’ and leave it at that, which is nice and simple and direct. I’m a big fan of simple. One person wants me to use the occasion of my birthday to ‘reflect on your life and this past year, and consider what it’s all meant.’ This person hopes I ‘gain a deeper understanding of what it means to be you’ and wants me to ‘examine what you’re feeling today and why you’re feeling it’. It’s very sincere and earnest and I appreciate this person’s concern — but at the same time I’m thinking ‘Don’t you fucking know me at all?’

Seriously, I can’t remember the last time I felt the need to try to understand what I’m feeling. I figure if I’m feeling it, that’s good enough. And a deeper understanding of what it means to be me? I don’t even know what that means. Don’t get me wrong; it’s sweet that somebody is concerned about my spiritual growth. If that’s what the concern is. But lawdy, I’ve been me my entire life — there’s not much new to learn, and frankly that makes thinking about myself as a person pretty dull. It’s more fun to think about other folks. I’m used to my own patch of weird; I’m a lot more interested in the weirdness of others.

That said, my patch of weird expanded a little today. I discovered that a few days ago I was featured on a website called Nail Art Design. I swear, I am NOT making this up. There’s actually a website about nail art, and there’s actually a photo of me wearing red nail polish and holding a snow shovel.

Let me just repeat that. There’s a photograph of me wearing red nail polish and holding a snow shovel on Nail Art Design.

Even I have to admit that’s a little weird.