Oh sweet Jeebus in a pickle barrel, have we not suffered enough at the hands of George W. Bush? Wasn’t it torment enough for us to live through the eight long, grim, disgraceful years of his presidency? Must we endure one more disappointing moment of this wretched, graceless, inadequate creature?

The best thing the former president ever did was leave office and disappear from public view. But now he’s back. He’s back and recklessly inflicting his painting on the blameless public. Just fuck me with a chainsaw and be done with it.

No, clearly that wasn’t enough. Now the unprincipled sumbitch has foisted a fresh horror on the world. George W. Bush has become a fucking painter.

Bush says he took up painting after reading an essay on Winston Churchill (another unprincipled sumbitch, but one who was at least intelligent and witty). The notion of the least curious human ever to occupy the Oval Office reading an essay on Winston Churchill is only slightly less preposterous than the notion of him painting. If he wanted to emulate Churchill, couldn’t Bush simply have started wearing a Homburg?

But no — the shameless bastard had to pick up a paint brush and perpetrate another outrage against humanity. 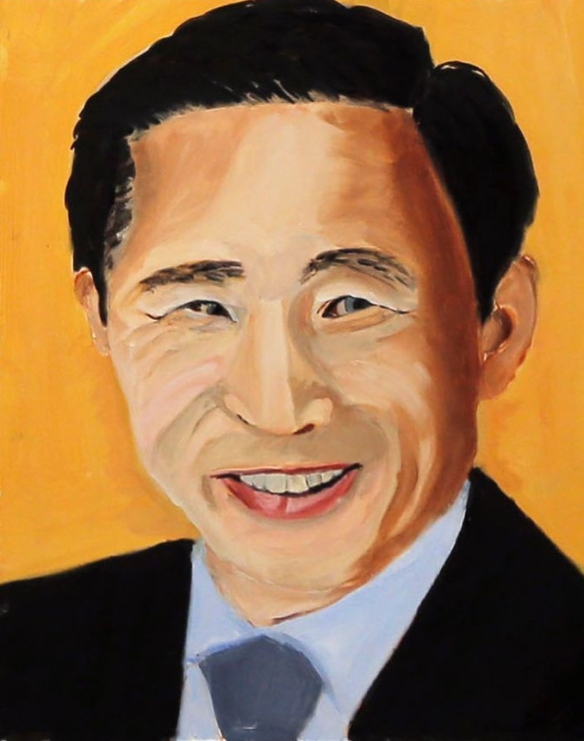 Bush, I’ll admit, is a better painter than he was a president — but that’s not saying much. His painting, in my opinion, is hopelessly amateurish and incompetent. That description also applies to his presidency.

Others disagree — at least in regard to his painting. Art critic Jerry Saltz was quite taken with Bush’s bathroom self-portraits. He said the work was:

‘simple’ and ‘awkward,’ but in wonderful, unself-conscious, intense ways. They show someone doing the best he can with almost no natural gifts — except the desire to do this. The reclusion and seclusiveness of the pictures evoke the quietude (though not the insight, quality, or genius) of certain Chardin still lifes. These are pictures of someone dissembling without knowing it, unprotected and on display, but split between the promptings of his own inner drives and limited by his abilities.

Yeah. Okay. Someone doing the best he can with almost no natural gifts — except the desire to do this. Yeah, that could also describe his presidency.

Bush portrait of Putin in the shower. No, wait…that’s apparently Bush his ownself.

Painting is hard work, to be sure. It takes a great deal of practice and a certain amount of native talent to be good. Bush, to his credit, is doing the work and practicing (though it’s a shame he wasn’t as diligent at being president). He says it’s changed the way he views the world (again, a shame he didn’t start painting before he became president).

“I see colors differently. I am, I guess, tapping a part of the brain that, you know, certainly never used when I was a teenager.”

Tapping…isn’t that how they get syrup out of the tree? Anyway, insert your own brain joke here. 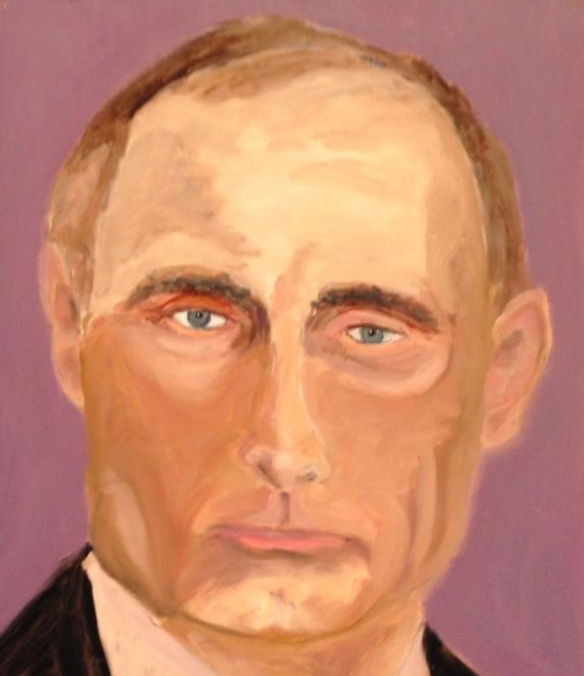 Bush portrait of…okay, I don’t know who the fuck this is supposed to be.

I’ll admit, if I had my way George W. Bush would be painting portraits behind bars. If he’d been the leader of any nation other than the United States, he’d have likely been tried for war crimes.

But that’ll never happen. So I suppose we should be grateful that it’s Bush who took up painting and not Dick Cheney. Who knows what sort of shit taco that fiend would serve up? Probably paintings of gory hunting scenes. Using the blood of slaughtered animals. Or puppies.