I’ve avoided writing about The Walking Dead because, as improbable it sounds, there are people who don’t share my perfectly normal interest in zombies. But almost everybody I know is interested in art and photography. The cinematography of TWD is always compelling — but sadly most zombie fans don’t recognize the artistry involved in constructing those shots. That artistry was apparent in the most recent episode.

A word of warning: this WILL CONTAIN SPOILERS.

In order to really appreciate the photography, it’s necessary to give a bit of background information. Here’s what you need to know: 1) a zombie apocalypse has taken place; only a few survivors exist, 2) everybody is infected with the zombie virus, though it’s dormant in the living, 3) a zombie bite is always fatal, 4) everybody who dies — including those who die of natural causes — becomes a zombie,  5) the only way to ‘kill’ a zombie is to destroy its brain.

A group of survivors has taken residence in an old prison, where they can live in relative safety inside its walls. However, some sort of lethal flu-like syndrome has infected many of the survivors — and when they die…you get the picture. The most recent episode is called Isolation. On the most obvious level, it refers to the fact that the survivors are attempting to isolate their members who’ve contracted the ‘flu.’

And all of that is depicted on the screen — through the writing and the acting, of course, but also through the camera work. 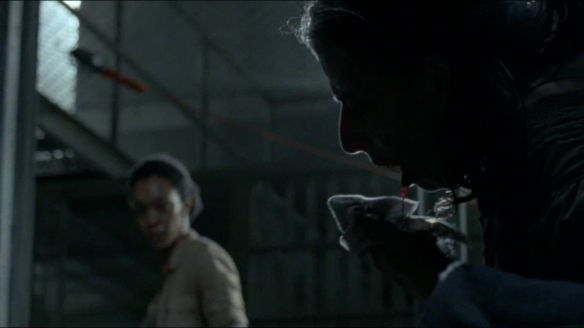 Notice how often the cinematographer uses the entire frame — not just from side to side, but from front to back. He deliberately stacks subjects on various planes within the frame. In the foreground of the first shot above we see a pair of eyeglasses attached to a simple grave-marker. Viewers will recognize the glasses as belonging to a young boy, the first victim of the mysterious flu. In the previous episode the boy died, became zombiefied, and had to be killed. In the middle-ground, a pistol — a killing tool, necessity in TWD world. In the background is Glenn, who is clearly exhausted — he’s exhausted both physically and emotionally, exhausted in almost every possible way (the boy with the eyeglasses was attacking Glenn at the time he was killed).

Everything in that shot — Glenn, the dead boy, the handgun — is linked thematically. Every element is isolated from the others. And yet every element is also inextricably linked to the others. The photography supports and enhances those themes. 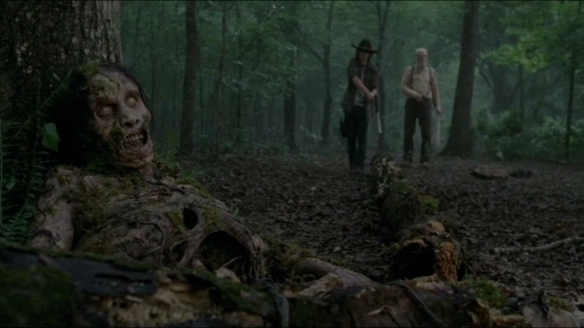 The same is true of the second shot. In the foreground, two bodies belonging to people who’d displayed symptoms of the illness. They’d been isolated; but somebody entered the isolation area, killed them, dragged their bodies outside, and set fire to them (much of the episode revolves around discovering who murdered these two). In the front middle-ground is the lover of one of the victims — a man obviously in shock. In the rear middle-ground are Rick and Daryl, leaders of the group of survivors. And in the background is Carol, the only one not looking directly at the bodies. At the end of the episode, Carol is revealed as the murderer.

Again, everyone and everything in the frame is thematically linked to everything else. And again, they’re all isolated from each other. 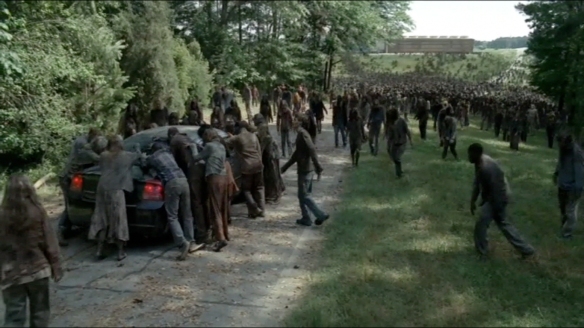 The director and cinematographer also use the frame to instill a sense of confinement. Everything seems to be crowding in on the characters. Even in the scenes that take place outdoors, the characters are somehow confined. In the woods they’re hemmed in by the trees, and by lurking zombies. On the open road — that most American venue — they find themselves quickly enclosed by a herd of zombies, trapped in the vehicle that’s supposed to grant them freedom of movement.

This happens in scene after scene in the episode. The frame is filled in every direction, thematically tight, and psychologically crowded. All those cascading claustrophobic moments create an aura of dread and despair in the viewer. It’s subtle, but very effective. 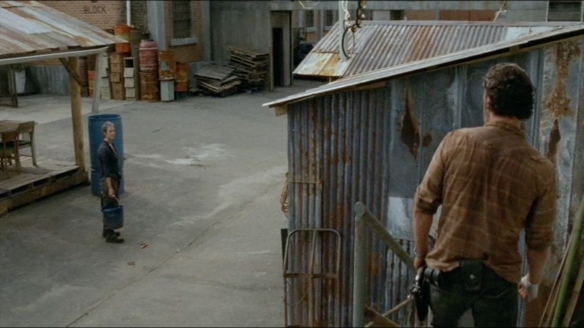 In the final sequence of the episode Rick is reluctantly preparing himself to ask Carol if she’s the person who killed and burned the two flu-sufferers. They’re filmed far apart; he’s high above her, in a rather judgmental position. She’s small and far below, waiting. He gradually comes down to her level — physically, emotionally, ethically — and asks the question he doesn’t want to ask.

The tension is palpable. She answers simply — yes. And walks away, the distance between them growing. And yet they’re both still linked, both still confined, both even more isolated.

I began watching The Walking Dead for the zombies. I still like it for that reason. Zombies are just flat out cool. But I appreciate TWD for the quality of the acting, the occasionally brilliant writing, and for the consistently amazing camera work.

6 thoughts on “it ain’t just the zombies”