Most last week sucked. It sucked on so many different levels. You’d need an abacus to count the many ways in which last week sucked. But on Friday afternoon Suspect #1 in the Boston Marathon bombing was dead. Suspect #2 was said to be injured and corralled in a ten block area of Watertown. So I felt free to abandon the television and the Internet for the first time in a couple of days and take a much-needed walk.

It wasn’t an ideal afternoon for it. The weather sucked too. The temperature had struggled to climb up into the low 40s, but I got the impression it wasn’t very committed to staying there. The wind was fluctuating between 6 and 7 on the Beaufort scale (not that anybody still uses the Beaufort scale, so let’s just say it was blowing about 25-30 mph) and shoving around massive wads of discouraged-looking clouds. Every so often, though, there was a break in the cloud cover and the most incredible sunlight would gush through for a moment.

So I stuck my little Fujifilm X10 in a jacket pocket and set off for the river.

The river was flooding a wee bit because of all the rain. Not enough to cause any serious damage, but the river had risen enough to cover the lowest level of the riverwalk. As I approached one of the pedestrian bridges, I heard an unusual noise. I assumed it was just the wind through the girders, combined with the rushing of the water. But it wasn’t.

Cord had been strung crisscrossed through the girders, to which small squares of something resembling cloth had been affixed. Even though the little flags were weathered and a tad faded (not surprising after a few days of rain), they gave the pedestrian bridge a rather festive look. They couldn’t quite overcome the gloomy weather, but they made a brave attempt.

I didn’t look at the flags very closely, I’m afraid. Not at that point. I noticed one of the flags had the logo of the Principal Financial Group, so I dismissed it as some of corporate promotional stunt. And it was, after a fashion. But as promotional stunts go, this one happens to be pretty cool. 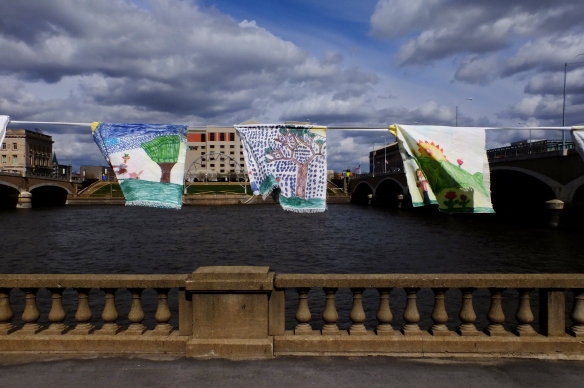 A local bookbinding company donated recycled clothette (a durable paper that resembles cloth and is used in — that’s right, binding books). Using still more donated materials, children turned those squares of clothette into ‘wishing flags.’ Each flag is a celebration of Earth Day — which, it turns out, is today, April 22. The materials were also made available near the riverfront one day recently, so anybody could create and contribute a wishing flag to the project.

Something like five thousand of the small flags were created. Volunteers, most of whom were students, worked with the Parks Department to string them up along the river. Not just across that particular pedestrian bridge, but for a mile or so along the riverwalk itself.

Remember, this was a cold, windy, cloudy miserable day. Somewhere just west of Boston a 19 year old kid who was responsible for at least four deaths and well over a hundred horrific injuries was cowering, wounded, in a tarp-covered boat in somebody’s backyard, hunted by dozens of police agencies. Thousands of lives had been disrupted, and some will never recover from it. And yet that Friday afternoon, for the first time in a week, I felt a sense of joy.

I’m going to say something sappy here. Sappy and sentimental and goopy. Here it is: By and large, people are pretty fucking great. Sure, there are always going to be folks who hate, folks whose anger and resentment and fear will cause them to do horrible things. But as we saw in Boston, good people outnumber the bad people. And here, along a small stretch of river in the Midwest, a group of kids collaborated with a local bookbinder and a multinational corporation to celebrate Earth Day. So yeah, haters are assholes and corporations are almost certainly inherently wicked, but people in general are pretty fucking great.

They’ll remove all those flags in a few days. And that’s okay. They’ll have served their purpose, and they’ll be recycled again. After a week like the one we’ve all just suffered through, it’s good to see something hopeful and cheerful. Like a kid’s painting of two happy girls, a few flowers, and some sort of mutant ferret.

And you know what else is cool? That building in the background? It used to be the main branch of the public library. Now it houses the World Food Prize, an honor given annually to somebody who has “advanced human development by improving the quality, quantity or availability of food in the world.” The prize was the idea of Dr. Norman Borlaug, who won the Nobel Peace Prize in 1970 — the very same year as the first Earth Day celebration.