Whenever somebody asks me about ‘my work’ I automatically assume they’re talking about writing, not photography (although it now occurs to me that I almost never discuss writing on this blog — which is probably something I’d think about if I was even remotely self-reflective). I don’t think of photography as ‘my work.’ I don’t even think about it in terms of ‘my photography.’ I think about it as ‘the photographs I shoot,’ which is a subtle but meaningful distinction. At least it’s meaningful to me.

Don’t get me wrong; I take photography seriously. I just don’t take myself seriously as a photographer. So it feels odd to me to write about the photographs I shoot. But a few days ago I mentioned I received an email in which I was asked the following questions:

I decided to take the questions seriously and try to answer them — at least insofar as the three photo series I’ve included on this site. Last time I talked about the Traffic Signals series. Today I’m going to explain the origins of the Faux Life series.

My blindness to what was going on, led me to act by them in a way that I must always be ashamed of, and I was very foolishly tempted to say and do many things which may well lay me open to unpleasant conjectures….

I blame Richard Prince. If you’re not familiar with Prince, he was the first photographer whose work sold for more than a million dollars. What made that amount even more staggering is his work was also the work of commercial photographer Sam Abell. Does that sound confusing? That’s because it is.

Sam Abell photographed the famous Marlboro Man advertisements. What Richard Prince did was re-photograph some of those advertising images. He removed the text, printed them very large, then presented them as a comment on American culture.

Afterwards he got worse, and became quite my shadow. Many girls might have been taken in….

Some folks would call that theft; Prince called it appropriation art. The idea is that by removing the image from its original context, new layers of meaning can be attached to the work. Abell’s original photograph was intended to create an association between Marlboro cigarettes and the robust life of a manly cowboy living and working in an idealized vision of the Old West. It was, in effect, a lie. A double lie, in fact. It not only associated smoking with a healthy lifestyle, it also invoked a nostalgic vision of an American West that never really existed. It was a lie used to sell cigarettes.

Richard Prince removed the Marlboro Man from that original context. In doing so, he gave the photograph a radically different interpretation and a different meaning. It became a comment on commercialism. The viewer has a different experience when looking at the re-photographed photograph — he’s no longer being sold a product, he’s being introduced to the idea of using romance as a marketing tool. Prince would argue that this, in effect, makes it a different photograph.

The key was in the door, and she had a strange fancy to look into it; not, however, with the smallest expectation of finding anything, but it was so very odd, after what Henry had said.

That concept — that simply by shifting the context of an image it can be turned into an entirely new image –fascinated me. It still does, in fact. I’m appalled that Prince made millions of dollars off Abell’s work, but I have to admit that even though the photographs of Abell and Prince are essentially the same, they DO have a different meaning — and Prince’s image is more interesting.

Anxious and uneasy, the period which passed in the drawing-room, before the gentlemen came, was wearisome and dull to a degree that almost made her uncivil.

I decided I wanted to play around with the concept of appropriation art. By coincidence, as I was knocking around ideas for an appropriation project, Buffy the Vampire Slayer came on television. I’m a long-time, devoted fan of the Buffy television series. It occurred to me that Joss Whedon had, in effect, appropriated the vampire concept and turned it on its head by shifting the role of vampire slayer from the traditional virile and sober-minded male to a bubble-headed Valley Girl cheerleader. The television show used the tropes of vampire movies to examine the life crises of high school students. 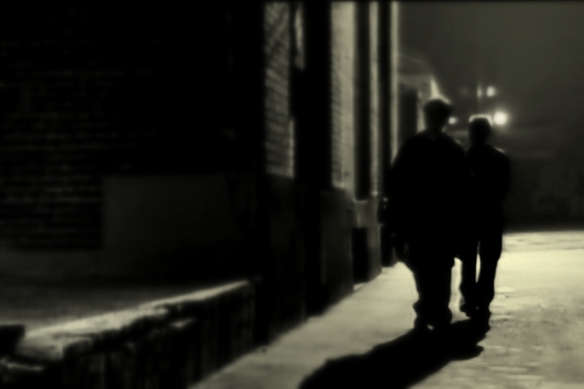 He had suffered, and he had learned to think: two advantages that he had never known before; and the self-reproach arising from the deplorable event in Wimpole Street, to which he felt himself accessory by all the dangerous intimacy of his unjustifiable theatre, made an impression on his mind….

It needed something else. And by still another coincidence, I was engaged in an ongoing discussion with a friend about the novels of Jane Austen. I was arguing that you could read her novels as detective stories in which the modern notion of crime was replaced with social deviance. Murder was replaced by incivility. Jane Austen’s protagonists were all keen observers of life, all had a detective’s eye toward detail.

We cannot help ourselves. We live at home, quiet, confined, and our feelings prey upon us.

It was a lot harder than I thought it would be. I wanted to catch moments of visual drama. I wanted there to be some compositional tension within the frame. But I also wanted to be sure the faces of the characters were obscured. If the viewer sees Buffy, I reasoned, then the photograph becomes all about Buffy. There was, as you can imagine, a great deal of Photoshop work involved.

Once I had the photograph, I needed to search the novels of Jane Austen to find an appropriate line. It had to be a line that, when associated with the photograph, would convey a completely different meaning than it did in the story. And yet the line still had to be congruous with the image.

It took a lot of searching. Jane Austen did not write short novels.

The invitation was refused.

There are now just over thirty photographs in the series. That seems like a nice size for a project. I keep thinking about returning to the series and adding new images, but it would just be for my own amusement. As an experiment in appropriation art, the series is complete. I did what I wanted to do, I’ve learned what I wanted to learn.

The project convinced me that appropriation is a valid art technique. It’s certainly ethically dodgy if the appropriator is making buttloads of coin off another person’s original work. But the technique of appropriation itself has artistic integrity.

Or at least that’s what I tell myself.

10 thoughts on “the integrity of theft”