I like people. I really do. But sometimes I despair of their lack of interest in the world around them. A few days ago I was downtown, crossing a bridge over the river, and I was overtaken by a couple of guys walking in the same direction. I heard one of them say “River’s iced over.” The other guy glanced over the side of the bridge and said “Yep.” And that was it.

One of the most intriguing winter phenomena was taking place below them, and they didn’t see it. Rivers and streams freeze every year, yes. It’s nothing new. But it’s a fascinating process. It’s a radically different process than what takes place on a lake or pond because…well, river water moves, and that makes the freezing process significantly more complex.

On a moving body of fresh water, ice almost always begins to form along the banks. There are a couple reasons for that. First, the temperature in the shallow water along the shore drops faster on a cold night. Second, there are quiescent areas along the banks where the water is more still. Ice that forms along the bank is appropriately known as border ice. If the river or stream or brook is narrow enough — or if the weather stays cold enough — border ice will gradually expand toward the center of the stream until the entire surface freezes over. 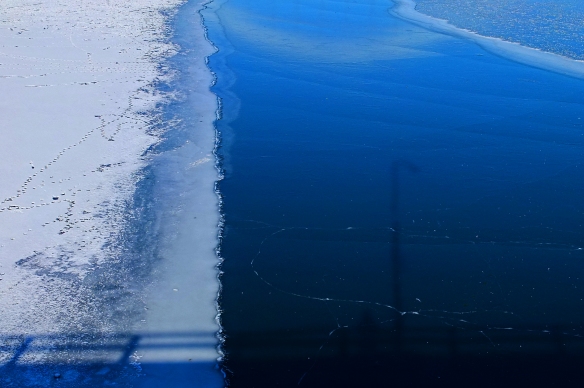 But that’s not so very different from what happens on lakes and ponds — or in your birdbath, for that matter. The really interesting stuff takes place away from the banks, where the water is more turbulent. That’s when the freezing process gets weird and wonderful.

As the temperature drops, the surface of the water begins to lose heat rapidly. The turbulence of the river flow sort of roils that super-cooled surface water with a less cold layer of water just below the surface. This causes tiny crystals of ice to form. Those crystals gather in loose, randomly-oriented discoid or needle-shapes. This is called frazil ice.

Frazil often looks like slush in the water. There are a couple of things that make frazil interesting. First, like most ice, frazil floats — so it travels downstream. Second it has an extreme capacity to adhere to any object it comes in contact with. In other words, frazil clumps easily. 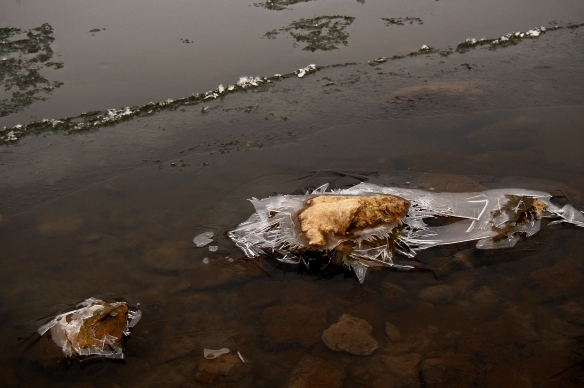 As it floats downstream, frazil bumps into stuff and sticks. In the photograph above, you can see frazil in its slushy form at the top of the frame. You can also see the line where frazil is clumping to more frazil, which will form the border of an ice pan. That raised line of ice is actually caused by the repeated collision of frazil against frazil.

A later stage of freezing occurs when frazil crystals coagulate to form a sort of soupy layer on the surface of the water. This is called grease ice because it looks slick. It doesn’t reflect light very well, which gives the water surface a matte appearance. 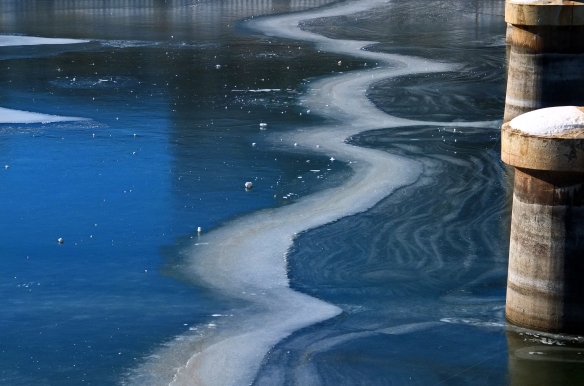 As the ice crystals become more compacted and solid they release more heat, creating surface slabs of ice known as ice pans. This is more like the ice we’re most familiar with. Ice pans often break free and float away downstream, banging and colliding with other ice pans, given them a softly rounded edges.

When these surface slabs of ice form in the bend of a river, they sometimes get caught in the rotational shear of the current and the ice pan spins around and around. As it rotates, the outer edge is gradually ground away until if forms an almost perfect circle. I’ve only seen this phenomenon once; sadly, I don’t have a photograph of it. 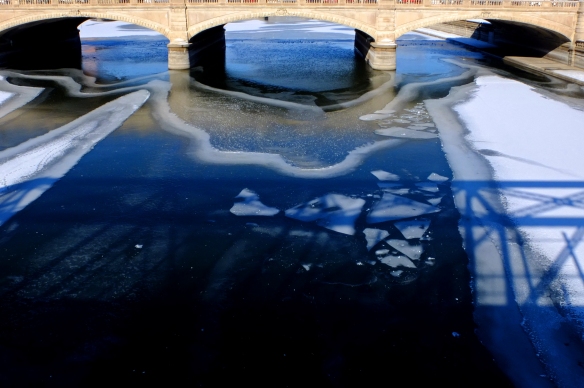 This astonishing collection of various freezing processes is precisely what those guys were looking at when they said “River’s iced over.”

Now, I understand that other folks might not find these details as intriguing as I do. I understand that for a lot of folks — most folks, probably — the only ice that matters is the ice in their drinks. I understand that, I really do. But I can’t help feeling that those two guys who hurried by me on the bridge have missed out on something. I can’t help thinking that if they stopped for just a moment and really looked at the river, if they’d  asked themselves what was happening — even if they never bothered to seek out the answers — that their lives would be somewhat richer.