Thank you very much for asking, but no.

So, no. Thank you for asking, but no. Now please, shut the fuck up and leave me alone.

I’ll continue to walk a lot, but not because it’s good for me. I’ll walk because I enjoy it. I like the pace of walking. Sometimes I’ll walk quickly, but more often I’ll stroll. Or meander. Or dawdle. Because I like to look at stuff. I may interrupt my walk for five, ten, or thirty minutes to watch some ants trying to carry a dead caterpillar. That’s why I’m walking — because watching ants tote a dead caterpillar across a sidewalk is a lot more interesting to me than my body mass index.

I’ll continue to ride my bicycle a lot, but not because it’s good exercise. I’ll ride my bike because riding a bike is fun. I’ll ride my bike to the market, but not to conserve fuel or save the environment. Those are good things. to be sure, and very commendable. I’m a big fan of conserving fuel and saving environments. But I’m riding because getting on a bike makes me feel like I’m twelve years old. I’m not going to be maintaining a certain pace, I’m not going to be trying to burn calories, I’m not going to be seeking out hills because they offer a challenge. If I ride up a hill, it’ll be because the damned hill is in my way. I’m much more interested in getting to the other side of the hill than in my ‘optimal heart rate while exercising.’

I’ll continue to cook the foods I want and eat them because I enjoy them. I won’t count calories, I won’t pay attention to how much salt or sugar there is, I’ll use real butter, I’ll eat fish because I like fish, I’ll eat pork because I was raised by a Southern woman, I won’t eat a lot of red meat because I don’t like a lot of red meat, I’ll eat glutens because I don’t know what a fucking gluten is and I’m not going to bother to learn, I’ll eat veggie burgers because I like they way they taste, I’ll eat organic foods if they’re available and I can afford them because they usually taste better, I’ll eat whatever I think might taste good even if it’s not healthy and even if it’s actively bad for me. I like food.

My body is not a temple. I have absolutely no interest in living in a temple. You know what my body is? It’s an alley. 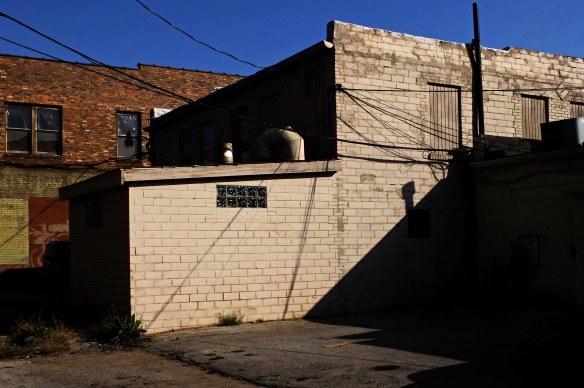 It’s a pretty clean alley, but it’s an alley. The buildings are old and beat up, but they’re still standing. There are some weeds and oil stains and odd bits of wiring hanging loose here and there, and it’s been patched up a few times, but that’s what happens, right? Here’s the thing: you can relax in an alley. It’ll never be pretty, but it can be tidied up. You can’t relax in a temple, unless you’re a priest — and even then you have to be on your best behavior. Nobody has to be on their best behavior in an alley.

Okay, that alley metaphor? It’s kind of stupid. Mostly I just wanted to include a photo in this post and when I was looking through my files and saw the alley photo, I thought of the analogy. So I decided to use it. That’s pretty much my approach to staying fit too. If I do something healthy, it’s usually because it doesn’t conflict with something else I’m doing. The fact is, I’m moderately healthy — but being healthy isn’t a goal; it’s a side effect. Maybe if I ever become actually unhealthy that’ll change. But for now, no.

So really, thanks for all the good thoughts for the coming year, and thanks for being concerned about my physical well-being, and thanks for inviting me to become or stay healthy with you. It’s very sweet and thoughtful. But no.

3 thoughts on “thanks, but no”