I’ve been shooting a lot of cityscapes lately — partly because I have a new camera that’s particularly well-suited for that sort of photography, and partly because I’m a sap for the geometry of structures. It’s been pointed out to me that most of my photographs are unpopulated. Devoid of people or other life forms. 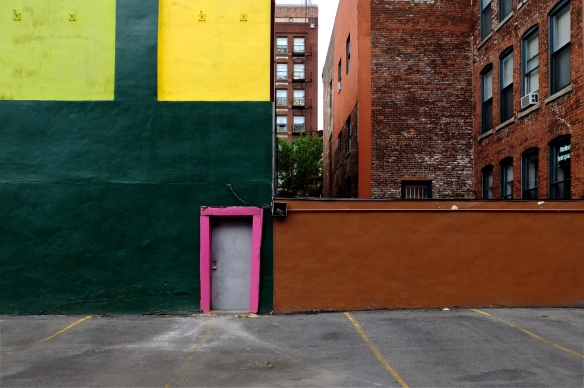 This photograph, for example, sparked a couple of my favorite internet people to make the following comments:

I’m becoming increasingly aware of how meaningfully empty and post apocalyptic your cityscapes are. I used to think it was purely a compositional choice, that you didn’t want too many people or cars cluttering up the frame, but now I’m wondering if Des Moines has been quietly evacuated

I’ve wondered, too, about Des Moines. Where are all the people?

Where are all the people? The people are all over the damned place. They’re out on the streets and in the alleys and walking through the skywalk. I don’t always include them in the photographs, though. When I’m shooting cityscapes, I’m usually drawn to some combination of light and shadow, or some arrangement of form and shape. I’m usually drawn to the geometry, and the problem is that so often the people are just wrong for the geometry in the frame.

When the people are being right, I include them. But when they’re being wrong I wait until the right people come along or until there aren’t any people at all. Or I give up and go somewhere else. For example, the following photograph needs people. I noticed the light and the shadows and the reflections, and I parked my ass across the street and waited for the right person or group to move into that space. I don’t recall how long I waited — I’d guess it was somewhere between a quarter of an hour and half an hour. During that time a lot of folks entered the space, but there was something wrong about all of them. None of them contributed to the space. So I documented the light, and moved on. With the right person, it would have been a good photograph. Now it lacks life.

There are other times — less common, to be sure — when I notice people who look like they’d be right. There’s something about the person that draws the eye and makes me think all that’s lacking is the right background. So I sort of wander along with them for a while in the hope they’ll move into an interesting space with good geometry. If they don’t, they don’t. I end up with nothing. I tagged along with the kid in the next photo and his puppy for maybe ten minutes (any longer and I begin to feel like a pervert). I shot maybe a half dozen frames in a half dozen different situations — but the light was always wrong, or the shadows were wrong, or the geometry was wrong. And when the exterior factors cooperated, the kid or the puppy were wrong, or I was a half second too slow or too quick. So in the end, I got nothing interesting. 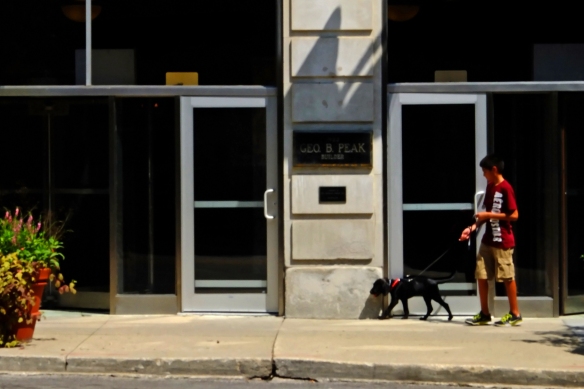 The thing is, I’ve been shooting cityscapes — photographs of the city. Not photographs of the people. This new camera is also, I think, well-suited for street photography and I’d like to start getting involved in that. Street photography is a lot more fluid and relies on a different sort of geometry. Instead of looking for the geometry of structures into which people might fit, I’ll have to learn to look for geometry and structure in how people move and arrange themselves.

Cityscapes, in my opinion, can fail if the people are wrong or if the geometry is wrong. I have the feeling that when street photography fails it’s because the photographer is wrong. That should make things interesting.

7 thoughts on “the people are wrong”