In the 1930s the Banner Coal Company explored “an unusually good grade” of coal in central Iowa, just a few miles south of Des Moines. The vein was rather shallow, buried beneath only forty feet of soil and shale. The shallow depth and the fragile ‘roof’ made mining the coal problematic. Traditional mining techniques wouldn’t work. So the company resorted to the open pit process.

Open pit mining wasn’t new. The practice had been used in the U.S. for a century–since the 1830s. The Banner Coal Company knew how to wrench the most product from the earth with the least fuss (and the most profit). They brought in the largest electric dragline excavator in the country (spectators traveled for miles to watch the massive machine at work) and for the next two decades they hauled coal out of the pits. It was the largest strip mining project in Iowa history. 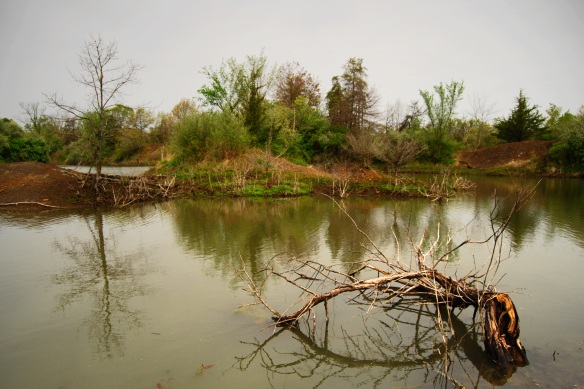 By the mid-1950s, the coal was gone–and when the coal was gone, the coal company went with it. They sold the land–some 220 acres–to the Iowa Department of Natural Resources, which intended to turn the area into a wildlife management area. The operative term there is intended.

Half a century passed without much being done. The pits slowly filled with groundwater. Natural flora grew wherever there was enough soil to support it. Growth on the waste-rock and tailings was spotty to say the least, and the only plants that grew were brought there by wind and wildlife. But the wildlife came, drawn by the water. It came, settled, made nests, created dens. It wasn’t just animals–kids were also drawn in by the deep pools of dark water (that attraction almost certainly heightened by parental warnings against the place).

In addition to the 80 acres of former-pit-turned-lake, the landscape is dotted with strange little pocket marshes and hidden sloughs where turtles and frogs squat with cranky blackbirds and condescending herons. In 2002 the Department of Natural Resources finally decided to turn the site into a state park. They built bicycle trails (for both casual cyclists and adrenalin-crazed mountain bikers), they set up picnic tables, added a boat ramp, and brought in other amenities. 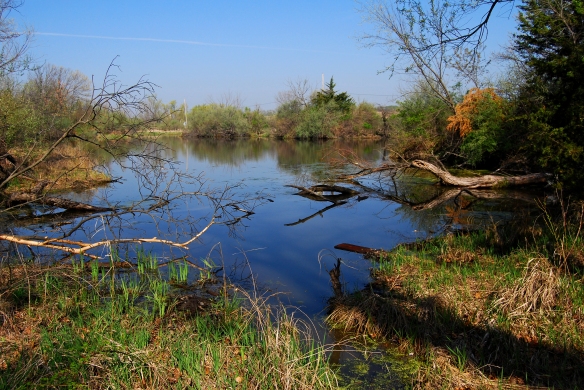 Despite the work that’s been done, the area still has an odd, semi-feral, almost post-apocalyptic feel. There’s a sense that Nature is patiently and unceasingly trying to overcome the damage done by thoughtless humans. Trying, but it’s been a struggle.

I feel strangely at ease here. As much as I despise the damage done by the Banner Coal Company, I can’t get too pissed off at them. In the 1930s they had little knowledge about the long term effects of this type of mining operation. In their ignorance, they created a landscape that feels wounded–even mutilated. And yet it’s a very compelling landscape, partly because of the harm that was done and partly because of the organic regrowth that hasn’t quite been able to repair the damage. Yet.

I like that yet. It’s a good yet. A comforting yet. Some day this area will lose its post-apo air. It’ll just be an unusual lake. Some day. But not quite yet.

1 thought on “not quite yet”