By chance, I heard the weather forecast last night. ‘Fog advisories for the morning; commuters should be alert.’ So I set my alarm for six o’clock ante meridiem—telling myself I’d go to bed early, which of course I failed to do. So there’s me at 6am, looking out the window and not seeing a bit of fog through the dark. Nothing. So I booted up my computer, went to work, and didn’t look out the window again until around eight o’clock.

And we had fog.

I’d completely failed to consider the mechanics of fog production. By 8:15 I was on my bicycle, by 8:30 I was on the bike path that ran along the creek.

It was a chilly ride, and wet. The fog wasn’t particularly thick, but it made the world all clammy and dark and weird and sometimes a wee bit dangerous. Occasionally it was more like a mist than fog. I stopped under one of the bridges to tie my hair back. 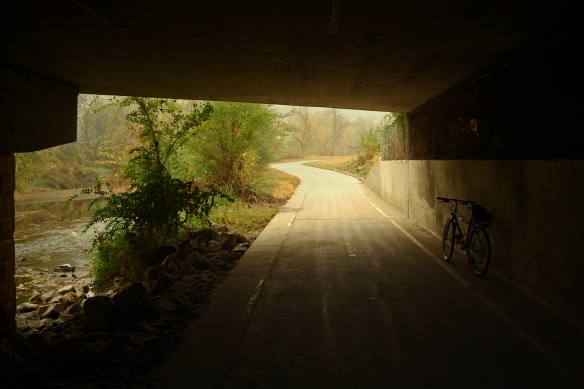 When I stopped, I surprised a feral cat with three kittens. The cat and two of the kittens scampered off up the creek bank; one of the kittens panicked and ran the other way—toward the creek. The creek was running low so the kitten wasn’t in any real danger, but it mewed and cried and was obviously frightened at being separated from the others. So I played border collie for about ten minutes, and eventually succeeded in herding the little bugger back across the bike path and up the bank where the others were.

Did I take a photo of the cat and kittens? Sadly, no. I didn’t take the camera out of the bike bag until after I’d dealt with the kitten. By the time I got the camera out, the thoughtless little bastards had scurried away. Still, it was pleasant under the bridge.

I had much better luck farther down the trail, when I came across Wrigley. I’ve met this dog and his human companion three or four times in the last couple of months. He owns property in the area; Wrigley owns him. He’s a classic golden retriever—smart, friendly, a wee bit loopy, eager to please. And I was reminded why you never want to wear black around a golden; after a few minutes of petting and hugging Wrigley had left about thirty-six pounds of dog hair on my clothes.

I mentioned earlier that the fog made the world a wee bit dangerous—and so it did, for two reasons. First, all those wet leaves were surprisingly slick; if you took a corner at speed, they’d slide out from under the tires. But the bigger danger came from the fact that the bike path wends its way through groves of walnut trees. Walnut trees drop walnuts. And they drop walnut leaves to hide the walnuts.

So concealed beneath all those lovely leaves are these handball-sized organic land mines waiting for some unsuspecting cyclist to plow into them. And it’s almost impossible not to smack into a few on a long ride. When you use toe cages on your pedals (like I do) finding a walnut with your front tire can get pretty exciting.

Even though wet leaves and walnuts are a massive pain in the cyclist’s ass, I have to admit I like them. First, they’re pretty—and pretty goes a long way. Second, they discourage those folks who ride for exercise from using that particular path. I’ve got nothing against riding for exercise, but so many of the people who do that seem to think those of us who ride for the enjoyment of it are just in the way. We’re taking up valuable bike space that could be more effectively utilized for cardiovascular improvement. Or something like that.

In a couple of weeks the wind will blow most of those leaves away. In a couple of weeks the squirrels will have gathered most of the walnuts. And the exercise crew will be back. And that’s okay too. At least they’re out riding. They’ll just have to get used to me stopping at irregular intervals in the bike path to take photographs and herd kittens.

The fog has burned off now. It’s sunny outside—beautiful blue sky, mid-70s, very light breeze. I’ve got an afternoon of editing in front of me. Editing and noodling around with book cover designs. Even though I wasn’t on the bicycle for exercise this morning, I can feel the ride in my legs. It’s a pretty good feeling.

If I was a golden retriever, I’d turn around three times, lay down, and take a nap.