So it’s just after midnight, right? And the brother’s little dog demands to be let outside to pee (how such a small dog can contain such an astonishing quantity of urine is a mystery to me; I think about a third of its body weight must be urine). But it’s a beauteous evening, as Wordsworth would have it–calm and free and all that. So I wander outside as well.

The moon is absurdly bright, and it’s illuminating the fence in a particularly charming way. So I go fetch my gear to photograph it. Camera goes on the tripod, tripod legs are extended, camera settings are adjusted, lens cap is removed, remote shutter release is ready. Then everything went pear-shaped, as the Brits would say.

In order to get the composition I wanted, I had to set up the tripod in front of the brother’s garage. But when you move in front of the garage, a motion sensor turns on a light. Of course, the light turns itself off after a few minutes, which would have allowed me to shoot the photograph IF I stood very still. Which I didn’t do three times in a row.

But the marvelous thing about a remote shutter release is you can stand off to one side and trigger it. So all I had to do was set up the shot, move out of range of the motion detector, wait for the light to go out, then press the remote release. It would have worked like a charm but for the little urine-filled dog, who repeatedly wandered into sensor range.

So I had to corral the wee beastie and put it in the house. By which time the moon had gone behind the clouds, leaving me with nothing whatsoever to photograph. Except the model of greatest convenience. 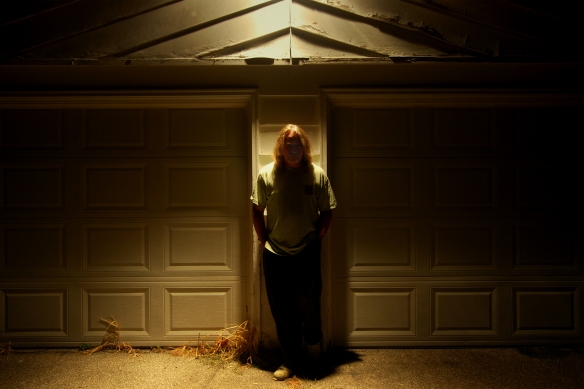 So here’s me, sulking.

6 thoughts on “the moon, the fence, and the dog’s bladder”