Yesterday, in another venue, after Comrade Trump’s fixer, Michael Cohen, pleaded guilty to lying to Congress, I made this comment:

Okay, that’s pretty nerdy. What I meant is that Mueller is approaching the Trump-Russia investigation with savage intensity harnessed by terrifyingly cold logic. It’s not just that Mueller is racking up so many guilty pleas and convictions, it’s also the totality of his control over the case. Consider these two things as proof of that control.

First, the plea itself was a surprise to everybody but Cohen and Mueller’s staff. Nobody knew this was going to happen until shortly before Cohen showed up in the courtroom. That’s astonishing. Keeping any secret in Washington, DC is hard. Keeping a secret in one of the most important criminal investigations in the history of the US, when every news agency and every political or criminal reporter on the East Coast is trying to uncover that secret, should be almost impossible. But Mueller’s team is disciplined and professional. They don’t leak. 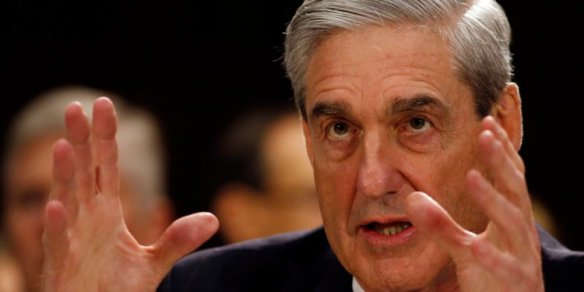 Robert Mueller about to perform a Vulcan synaptic pattern displacement.

Second, buried in section seven of Cohen’s plea arrangement is this line:

The Government and your client reserve the right to describe fully, both orally and in writing, to the sentencing judge, the nature and seriousness of your client’s misconduct, including any misconduct not described in the charges to which your client is pleading guilty.

Why is this important? Because while Mueller is required by law to submit a report at the conclusion of his investigation, the Attorney General (or the Acting Attorney General in this case) isn’t required to make the report public. It’s entirely possible (and lots of folks think it’s likely) that Acting AG Whitaker would seal the report. Keep it confidential and out of the view of the public.

But with this provision in the plea arrangement, Mueller has protected his ability to let the public know what he discovered in the course of his investigation. If the report itself gets stifled, Mueller and/or his staff can read it out loud in the courtroom. They’re not taking any chances; they’ve been making a case and they want that case to be heard.

Klingon ruthlessness directed by Vulcan reason and logic. If you’re a target of Mueller’s investigation, that’s a terrifying combination. If you’re a good citizen, it’s a comfort.

2 thoughts on “a klingon who thinks like a vulcan”