Let me give you an example. A few days ago Eddie Scarry, a writer for the conservative newspaper The Washington Examiner, posted this on Twitter.

And, of course, immediately there was a backlash. A deserved backlash, to be sure, but mostly it was a backlash about this line: that jacket and coat don’t look like a girl who struggles. It was a backlash about the term ‘girl’ used for a 29-year-old woman who was a newly-elected member of the U.S. House of Representatives. But mostly it turned into a discussion about what clothes are appropriate — and affordable — for a young woman from the working class who wants to look nice in an office environment.

Which means we fell for it. Remember, ‘it’ is the misleading bullshit conservatives throw in front of us to distract us. It’s NOT about her clothes. When we respond to bullshit by discussing the clothing options of Alexandria Ocasio-Cortez, we are falling for the misleading bullshit. It’s sabotage. It’s creating a narrative designed to undermine Alexandria Ocasio-Cortez. It’s suggesting she is a fraud, that she’s not who she says she is, that she doesn’t belong in a position of power, that she can’t be trusted. That she’s phony. I’m going to say it again; it’s NOT about her clothes. We do her a disservice when we let folks like Eddie Scarry distract us by talking about her clothes.

Alexandria Ocasio-Cortez working as a bartender.

Repeat his attack — and similar attacks — for a decade and some of that narrative will infiltrate the public consciousness. After a few years, people will begin to distrust AOC without quite knowing why; they’ll begin to dislike her without knowing quite why. This is exactly what conservatives did to Hillary Clinton. It’s what they’ve done to Nancy Pelosi. It’s what they’ve consistently done to all effective Democratic women leaders.

They’ve started on AOC even before she’s been sworn in. Why? Because she scares the absolute shit out of them. She’s young. She’s young AND she’s conventionally attractive. She’s a young, attractive woman AND she’s of Puerto Rican descent. She’s a young, attractive, working class Latinx AND with less than US$200,000 in campaign funds, she won a primary against a long-term Democrat with campaign funds of nearly $3.5 million and who was the Chair of the Democratic Caucus of the House of Representatives. She did it through hard work combined with intelligence and passion. And that scares them. 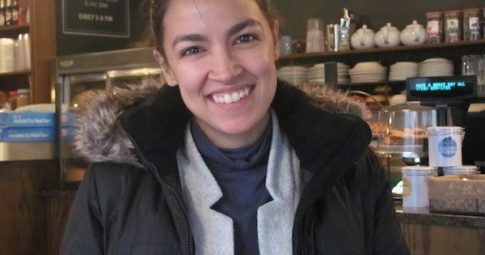 It’s not about her clothes.

Let’s face it, Eddie Scarry doesn’t give a damn what Alexandria Ocasio-Cortez wears to work. He only cares that she reports for work in Congress. He only cares that Congress this year is less white, less male, and less hetero than it’s ever been. Eddie Scarry isn’t a fashion blogger; he’s a conservative political reporter with an agenda (and I’m being charitable here; Scarry made his bones at a gossip blog called FishbowlDC). He only cares about undermining effective Democratic leaders. He’s only concerned with sowing discord among liberals.

Don’t let him trick you into thinking this is about clothes. It’s not. It’s really not. It’s about the slow introduction of poison. It’s about weakening Alexandria Ocasio-Cortez. If we continue to fall for the bullshit Scarry and folks like him throw in front of us, we’re just spreading the poison.

4 thoughts on “it’s not about her clothes”