The comments — they’re what this generation has instead of Vietnam. It’s where you lose your innocence and youth.

Last week I wrote something about the Charging Bull and Fearless Girl that generated a metric ton of comments. I didn’t read them all. I couldn’t; who has time to read a metric ton of comments? But I’d set up this blog so new commenters must be approved (I rarely get a lot of comments; an approval process wasn’t expected to be a chore), so I was forced to glance at each comment long enough to determine if it was legit or if it was an opportunity to date Russian models or buy genuine Michael Kors handbags for 80% off.

Now that things have slowed down, I’ve been dipping into the comments. And you know what? Some of them are brilliant. Some — surprisingly few, really — are stupid and/or offensive, but for the most part the comments are composed by folks who sincerely want to express a point of view. There really wasn’t much heart of darkness to be found. It was more like the scapula of darkness, with moments of the raised middle finger of darkness.

But here’s the thing — and I think it’s a wonderful thing: people are arguing about art. I’m going to repeat that very slowly, because it’s not something you hear very often. People. Are arguing. About art. 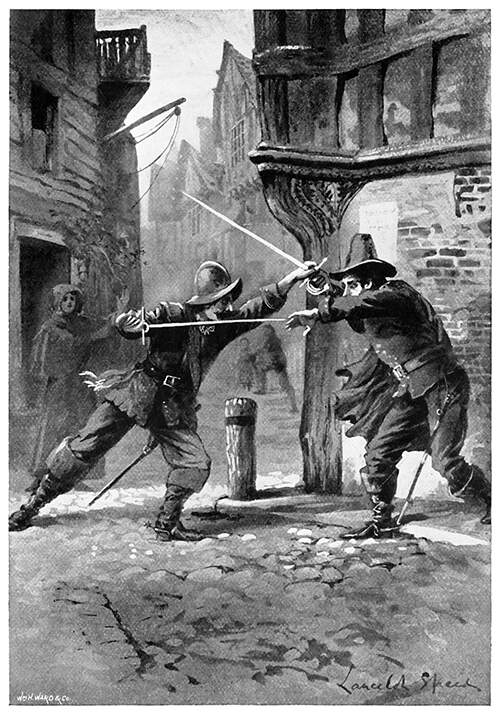 “The girl must go!” “The girl must stay!” “She is an affront to Capitalism!” “Patriarchy must die!” “Your argument is not valid!” “If YOUR argument was valid, it would be easier to find images of women fighting with swords!” “I have no response to that, but I will continue to argue!” “I shall argue on as well! Have at you, varlet!”

They’re thinking about the purpose of public art, they’re forming opinions about the legitimacy of various forms of artistic expression, they’re debating the pros and cons of commissioned art, they’re arguing about depictions of gender in art, they’re reflecting on how context shapes the meaning of art, they’re having passionate disagreements about the intersection of art and economic systems, they’re fighting about what constitutes appropriation and what qualifies as guerrilla art. People — lots of people — are arguing about art. How cool is that? Very cool, is how cool.

There are a lot of recurring topics in the comments that I’d like to address, but I don’t want to turn this into Greg’s Fearless Girl vs. Charging Bull blog. So I’ll just natter on about two of the more prevalent comments.

Lots of great works of art have been commissioned.

Yes, that’s absolutely true. Michelangelo and the Sistine Chapel was often mentioned in the comments. But here’s the difference: Michelangelo’s contract to paint the ceiling specified some of the elements to be included (the 12 apostles, for example), but he insisted on the right to interpret how to present those figures. The Pope, for example, didn’t approve of Michelangelo’s decision to include nude figures, but he painted them the way he wanted to paint them. In contrast, as noted in AdWeek, the design of  Fearless Girl was predominantly market-driven.

We were so meticulous with Kristen about designing the girl’s look. It was super important to us, and to everyone at McCann, that she feel relatable to all kinds of girls and all kinds of women…. Every tiny detail of that pose, and particularly the face, and her tilt and angle, was so carefully designed to articulate a really specific message.

Let me be clear: there’s nothing wrong with that. Commercial art IS art, and commercial artists have to be exceedingly talented to turn a marketer’s concept into a piece that works as art while still selling a product. That’s not easy. But it’s important to distinguish between a commissioned work of art in which the artists has the agency to interpret the design and a commissioned work in which the design is largely presented to the artist.

The plaque has actually been removed. In fact, it was removed before I wrote my blog article. A new plaque which doesn’t mention SHE is in its place. Here’s the new plaque:

Fearless Girl was placed in New York City’s Financial District, in honor of International Women’s Day 2017, to celebrate the importance of having greater gender diversity in corporate boards and in company leadership positions. She also stands as an inspiration for the next generation of women leaders”—presented by the New York City Department of Transportation Art Program and State Street Global Advisors

It doesn’t mention SHE, but it acknowledges State Street Global Advisors. More, it suggests Fearless Girl was created to honor International Women’s Day. Again, the decision to install the statue on that date appears to be as much of a marketing strategy as anything else.

“[T]here was a lot of discussion with State Street about the timing of this, because it was so important and meaningful. Launching it on the cusp of International Women’s Day really provided so much fodder for people to emotionally react to her.”

Again, there’s nothing wrong with this — aside from the misleading impression that the primary purpose of the statue is to honor International Women’s Day. I do believe the marketing team is sincere about honoring that day; but they’re professionals and they knew the statue would have more impact because of the date it was released. It was a clever, deliberate, calculated decision AND it also promoted a feminist perspective.

It’s also true the great mass of people are unaware that Fearless Girl was a marketing device — but the great mass of people weren’t the target audience. They were targeting the folks who make investment decisions. And hey, it worked. According to Fortune, SHE ‘has received $3.2 million in new inflows since March alone, half of its total inflows in 2017 so far.’

Fearless Girl is a very effective tool for increasing inflows — which I assume means money (I have to acknowledge that I’m a dolt about matters of finance; Fortune also pointed out that SHE is listed on the NYSE ARCA exchange, not the Nasdaq, as I claimed — and while I’m sure the distinction is important, I haven’t a clue what it means).

Let me repeat this one more time: there’s nothing wrong with running a successful marketing campaign. The problem I have is with the repeated suggestion that Fearless Girl was first and foremost a work of art rather than a very clever and rewarding advertisement for financial services.

I still love Fearless Girl. And I’m still bothered by her backstory. I still think Arturo Di Modica has a point — that the installation of Fearless Girl has both appropriated his work by making it an essential aspect of the new statue, and it’s altered the original perception of his work. And I still don’t know what should be done about it.

But I know this: people are talking about art. We’re out of the boat. And this is exactly what I got out of the goddamned eighth grade for.

15 thoughts on “the comments”