Early this morning two local police officers–one from Des Moines and one from the suburb of Urbandale–were murdered. The officers were shot at separate locations a few city blocks apart within about a twenty minute period. Both officers were shot and killed while sitting in their squad cars at intersections.

These were clearly targeted killings — purposeful assassinations. Almost immediately after the news of the murders was released, a lot of people on social media began denouncing certain segments of the population.

Thank you Obama, Hillary, Colin Kaepernick and all the morons who have been denigrating and attacking our law enforcement and dividing our country.

It wouldn’t surprise me if this goes all the way to POTUS! I’m beginning to think the politicians are profiting from drug trade and that’s the reason why they want to Nationalize the police.

Islamic or BLM attack on our POLICE!!!

The blacks are way out of control, we need to take back our streets regardless of what the media thinks and says.

BlackLivesMAtter and Kapernack…have made it cool to kill cops….with Obama and HIllary and many other DEMOCRATS cheering them on

It wasn’t just the usual ‘Comment Lunatics’ saying this sort of stupid shit. Rudy Giuliani, who was in town laying down manure for Donald Trump, said, “I’m not going to politicize this, but…” and then compared these murders to those police murders fueled by anger over the shooting by police of unarmed black men. Giuliani’s clear inference was that killer was likely to be an angry black guy.

Later this morning, police released a photograph of a suspect wanted in the murders. 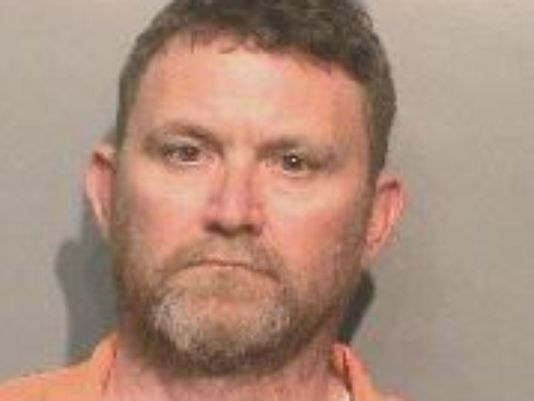 Well, okay — an angry white guy. This is Scott Michael Greene of Urbandale. Locally, Urbandale is sometimes referred to as ‘Suburbandale’. When the city was incorporated in 1917 it was seen as a ‘streetcar suburb’ of Des Moines. Not much has changed. It’s your basic white, middle class suburb distinguished from Des Moines only by street signs informing you that you’ve entered Urbandale. 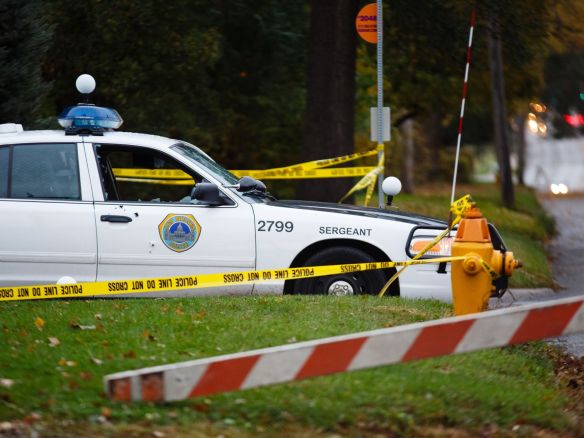 Scott Michael Greene has a history of anger issues, conflict with the police, and a general dislike of folks who aren’t white. Oddly enough, the Colin Kaepernick comments made by racist idiots are relevant. Just a couple of weeks ago, it appears Greene attended an Urbandale High School football game. During the playing of the national anthem, a group of African-American students remained seated. Greene apparently went to that section, stood in front of them, and displayed a Confederate Battle Flag.

Somebody allegedly hit him. Somebody else  allegedly took the Confederate flag. Greene was then escorted out of the stadium. Greene made a long, rather pointless video of his chat with Urbandale police officers.

If you haven’t the time or patience to watch the video, it seems Greene felt oppressed because he wasn’t allowed to wave a flag celebrated by racists in front of some black kids whose behavior offended him. Greene said this about the video:

“I was offended by the blacks sitting through our anthem. Thousands more whites fought and died for their freedom. However this is not about the Armed forces, they are cop haters.”

That wasn’t Greene’s first hostile encounter with police officers or black folks. Two years ago he was charged with a misdemeanor count of Interference with Official Acts when he resisted being patted down for weapons by Urbandale police. Two days later, Greene accosted a man in the parking lot of an apartment complex, shone a flashlight in the man’s face, and allegedly called the man ‘nigger’ and threatened him, saying “I will kill you, fucking kill you.” He pleaded guilty to two misdemeanor charges in those cases.

It’s to be hoped that Greene will soon be arrested without any further violence. However, since he is said to be armed with some version of an AR-15–the Jesus Gun of gun nuts everywhere–anything is possible. (UPDATE: Greene has peacefully surrendered himself to a Department of Natural Resources officer.) 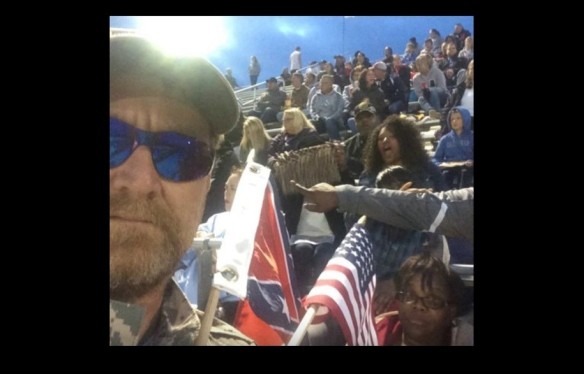 Obviously, the only person responsible for these murders is the person who held the weapon, pointed it at police officers sitting in their vehicles, and pulled the trigger. But you’d have to be willfully blind NOT to see connections between this tragedy and recent events.

I’m just guessing here, but I suspect we’ll learn Greene was a Trump supporter. I’m basing that guess on the fact the Greene appears to be pretty much at the center of the Trump demographic: white, racist, angry, aggressive, resentful, confrontational, and armed. I’m also basing this on another ugly fact: Donald Trump’s campaign appearances have contributed bigly to an atmosphere of hostility and violence and hateful speech. His speeches have encouraged otherwise quiet racists and haters to give voice to — and even act on — their hateful world views. (UPDATE: according to a DM Register reporter, this is Scott Greene’s home.) 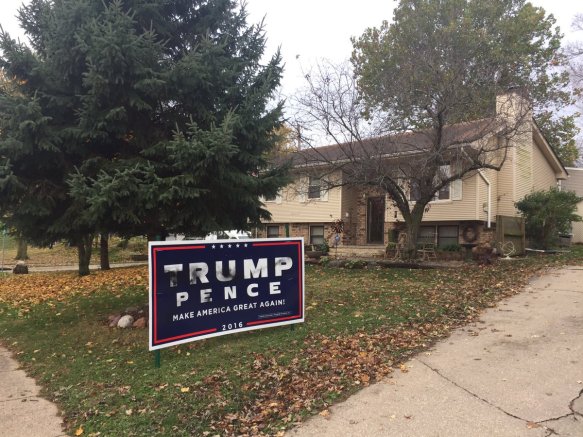 Like Giuliani, I want to politicize this without appearing to politicize it. But whether we like it or not, these murders have a socio-political component. The motivation for pulling the trigger might not be overtly political, but assuming Green IS the killer (and it’s critically important to remember that at this point he MUST still be considered innocent) it would be naive not to consider the social climate in which the murders took place.

The almost unbearably sad thing is that whatever directly motivated the shooter to murder the two police officers, their deaths will be subsumed by politics. At a time when the families and friends and co-workers of the officers (as well as the family and friends of Scott Greene) are grieving and suffering, the politics of the moment will transform their tragedies into footnotes.