It’s a pretty good visual. Marco Rubio sitting in leather chair, speaking calmly and using simple declarative sentences, explaining the reasons behind the attacks in Paris. If you don’t take the time to think about what he actually says, you might find  him persuasive.

But let’s not be stupid. Because if you do take a moment to consider his comments, it becomes pretty clear he doesn’t have a fucking clue.

“This is not a geopolitical issue where they want to conquer territory, and it’s two countries fighting against each other.”

Yeah, it kinda is about conquering territory. ISIL devotes the vast majority of its time and money — not to mention its personnel — on conquering and holding territory in Syria and Iraq. Rubio is sorta kinda right that it’s not two countries fighting against each other; it’s a whole bunch of countries. He’s apparently ignorant of the fact that ISIL is attempting to carve out its own state — and is fighting a ground war against Iraq and Syria and free Kurdistan (as much as one exists). They’re also engaged in combat against Russian and Western forces in the region. There’s a reason they call themselves the Islamic State of Iraq and the Levant.  Let’s not be stupid, okay?

“They literally want to overthrow our society and replace it with their radical Sunni Islamic view of the future.”

Literally. C’mon. Does ISIL have an air force? No, they do not. Do they have a navy? Again, no. And despite their military success in Iraq and Syria, they don’t really have much of an army. What they have is a moderately disorganized horde of highly enthusiastic but mostly amateur troops. They may want to overthrow the U.S. and the rest of the world (they’ve said as much), but let me just say this: they literally can’t. Hell, there are armed groups in Texas and Wyoming and Montana that have a better shot at taking down the U.S. government — and they have no shot at all. Let’s not be so stupid.

“This is not a grievance-based conflict. This is a clash of civilizations.”

Yes, it IS grievance-based. And no, it’s not a clash of civilizations. The folks who control ISIL are Salafists, and their grievance is that the world — and  especially ‘heretic’ Muslims in the Middle East — haven’t submitted to the will of Allah (as they interpret it). Sure, at least 99% of the world (including Muslims) doesn’t acknowledge the legitimacy of their grievance, but it’s a grievance all the same. You don’t try to form an entirely new State unless you have a pretty significant grievance. 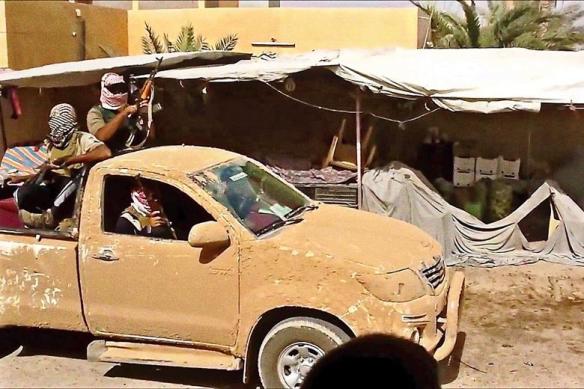 You can’t get from the Iraq-Syrian border to the U.S. in a Toyota pickup.

Also? ISIL isn’t a civilization. It’s not even a stable State. It’s a constantly shifting, armed collective committing mass murder under the direction of religious extremists. Civilizations take time to become established; they require a civil society, contributions to science, a contemporaneously advanced industry (advanced in comparison to other cultures in that time period), and stable form of government.

None of those things apply to ISIL. Seriously, let’s not be completely fucking stupid.

Lawdy, where to start? Okay, yeah, ISIL isn’t tolerant. And yeah, they don’t want girls to go to school or women to drive. And yeah, they’re not interested in free speech. They probably DO hate those things, and maybe they hate any literal civilization that promotes those ideas. But dude c’mon, they didn’t send suicide bombers to Paris because French girls go to school; they didn’t bring down a Russian passenger jet because Vladimir Putin is committed to free speech. They attacked French and Russian citizens because both France and Russia recently increased military actions against ISIL-controlled territory, and because it’s effective recruitment advertising.

Which means yeah, they really do hate us (and France and Russia) because we have military assets in the Middle East. Let’s not be that stupid.

Seriously? Okay, go ahead; be that stupid. Go ahead and try to make this into High Noon at the ISIL Corral. Be that determinedly stupid.

But here’s a true thing: ISIL can’t win. Not in any traditional sense. They can’t win militarily, they can’t win culturally, they can’t win politically, and they can’t even win religiously. The very best ISIL can hope for is to maintain control over a chunk of territory along the Syria-Iraq border for a while. Maybe a long while.

But this is the 21st century. Governments can no longer exist in isolation. ISIL doesn’t have a time machine; they can’t go back to the glory of the 9th century. Even if they could, they’d almost certainly murder Harun al-Rashid — in the same way modern Republicans would kick Ronald Reagan’s bony ass out of the GOP. The most isolationist government on Earth is North Korea, and North Korea would collapse as a nation if not for its trade agreements with China and a handful of other nations. On top of that, there’s the InterTubes — and anywhere people have internet access there’ll be people hungering for information. And porn. Both of which are inherently subversive.

ISIL can’t succeed in the modern world — not for long. They’re dangerous, no mistake. They’ve proven themselves to be brutes and sadists, and they’ll continue to pull crazy shit like the Paris attacks. If Western nations allow themselves to get drawn into the ground war in Iraq and Syria, ISIL will thrive for a while. But in the long run, the reason for its existence will also be the reason for its extinction. Hatred and intolerance are only effective in the short term.

One thing has me curious, though. Where are they getting all those Toyota pickups? Oh, and Marco Rubio? He’s stupid.

9 thoughts on “let’s not be stupid”