When brainstorming about what to do with the area, the idea of a gun range came up.

The area in question is behind the Rocky Mount United Methodist Church in Jemison, Alabama. According to Pastor Philip Guin, the area was a gully “full of kudzu, snakes and other vermin.” Nobody in Jemison like kudzu, or vermin, or snakes. They fucking hate snakes in Jemison. Totally hate those slithering little bastards. So they decided to clear the area and turn it into…something.

We don’t know what other suggestions for the area might have been considered and rejected. A community vegetable garden, maybe. That would have been nice. Or maybe somebody suggested planting a few trees, maybe build a little gazebo — a nice, quiet place for community picnics or concerts given by the Jemison High School Jazz Band. Or hey, how about a couple of basketball hoops? You know, keep the local kids busy and out of trouble. A baseball diamond might work, or a soccer pitch (though that might be seen as unAmerican).

The thing is, there were LOTS of inexpensive, community-oriented options open to the Rocky Mount United Methodist Church. Options that would be in keeping with church doctrine. But no…the idea of a gun range came up.

“We had quite a number of church members, some elderly ladies, for example, and some not so elderly women that had purchased guns, but didn’t know how to use them.”

Okay, I’ll admit the thought of a bunch of old folks unfamiliar with firearms having guns in their homes is disconcerting and alarming. But…a question: why the fuck are the elderly women of Jemison, Alabama arming themselves? We’re talking about a town with a population of about 2500 people. Total. There can’t be much crime there. The Jemison Police Department has only eleven full-time officers. Eleven. That includes the park ranger at Minooka Park. Who the hell are these women planning to shoot? 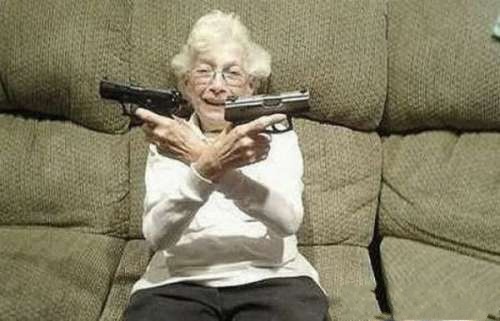 The whole purpose of this range is to provide recreational and gun safety in a warm, loving, Christian environment.

Uhh…well…lawdy. Okay, then. Recreational gunfire in a warm and loving…oh for fuck’s sake, are you insane? We’re talking about a church, here. A building used for religious activities, for worship. I’m not a Christian, but even I understand that there’s a fundamental disjuncture between a structure dedicated to a religious figure called the prince of peace and a goddam gun range. Jeebus on toast, what the fuck is wrong with you people?

“This is an opportunity for us to reach out in the name of Jesus Christ in a setting that is completely unique.”

Don’t be blaming this bullshit on the old women of Jemison, Alabama. I’m just guessing here, but I really most sincerely doubt it was an old woman who raised her hand during the discussion of what to do with that overgrown area behind the church and said “Hey gang, let’s make a gun range! You know…for Jeebus!” I’m pretty sure it was a guy who suggested that. I wonder if anybody other than elderly women have a use for a handy firing range.

6 thoughts on “it’s a fucking miracle, is what it is”