First thing every morning: coffee and the news. That’s my routine. The coffee because coffee is good, the news because it’s so often horrible. If I read the news first thing in the morning, the day can only get better.

I have favorite types of news stories. One of them is the Republican Shocked to Learn Saying Horrible or Stupid Things Might Not Be Universally Accepted category. You know, like when Todd Akin was surprised to learn there were people who didn’t divide rape into legitimate and illegitimate cases. Or Mitt Romney, who was startled to find that some people didn’t share his opinion that 47% of the population refused to take responsibility for their behavior. I love those little reality checks. 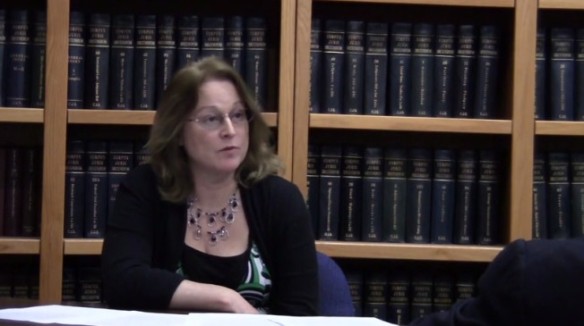 Ms. Waters is the Recorder of Deeds, an elected official in Jefferson County, Missouri. She recently wrote the following on her Facebook page:

I have a question for all my friends who have served or are currently serving in our military … having not put on a uniform nor taken any type military oath, there has to be something that I am just not aware of. But I cannot and do not understand why no action is being taken against our domestic enemy. I know he is supposedly the commander in chief, but the constitution gives you the authority. What am I missing?

What is she missing? I don’t know…maybe some critical cognitive functioning? I don’t expect elected officials at the county level to be familiar with the details of the U.S. Constitution, but this is some pretty basic stuff, right here. Clearly, she’s heard the phrase ‘domestic enemy’ somewhere, and she seems to understand it’s somehow connected with the Oath of Enlistment. She also appears to realize there’s a link between being President of the United States and being the Commander in Chief of the armed forces. It really shouldn’t be that difficult to reason this through. Most folks learn this stuff in a junior high civics class.

Okay, now why doesn’t the military take ‘action’ against the president? The Unified Code of Military Justice tells us why. It’s in the section on mutiny and sedition — which is sort of a hint (that would be (Article 94, section 894, by the way). It states any member of the Armed Forces who “with intent to usurp or override lawful military authority, refuses, in concert with any other person, to obey orders or otherwise do his duty or creates any violence or disturbance is guilty of mutiny.” And any member who “with intent to cause the overthrow or destruction of lawful civil authority, creates, in concert with any other person, revolt, violence, or other disturbance against that authority is guilty of sedition.” That bit about the ‘lawful military authority’ and the ‘lawful civil authority’? Yeah, that includes the President of These United States. Oh, another thing: the punishment for mutiny and/or sedition? It’s “death or such other punishment as a court-martial may direct.”

Finally, that stuff about ‘domestic enemies’ comes from the Oath of Enlistment. When you join any branch of the military, you have to take this oath:

I don’t think you have to mention God anymore, though you did when I enlisted. But that’s irrelevant. What Ms. Dunnegan Waters needs to look at is that middle part of the oath. The part that says “I will obey the orders of the President of the United States.”

Some people (and by ‘some people’ I mean a LOT of people) pointed out that it’s probably inappropriate for the Jefferson County, Missouri Recorder of Deeds to suggest members of the U.S. military should engage in sedition and mutiny. This, of course, took Ms. Dunnegan Waters completely by surprise. She said,

No, of course not. She just wants the military to take action against him. You know…in the kind, gentle, supportive sort of way the military takes action. And besides, she says, people are just misinterpreting her Facebook comment. In an interview with the local public radio station, she said this:

Like so many Republicans who say outrageously stupid things, Ms. Dunnegan Waters appears mainly to be surprised that anybody was offended. I mean, how could anybody possibly be upset that she called the president a domestic enemy (which she totally didn’t do, though maybe she did, but if she did (and she did) she didn’t really mean any ill intent, so that’s exactly the same as she didn’t)? And like so many Republicans, she blames all the fuss over how she phrased it, not because of what she said.

“I should have known better than to use certain phrases. Maybe my choice of words was bad.”

By the way, Debbie Dunnegan Waters is up for re-election in a few weeks. I hope the good people of Jefferson County, Missouri will give her a lesson in responsibility.

5 thoughts on “a little harmless sedition and mutiny”