This surly-looking sumbitch is a cane toad. They’re big, hungry bastards, native to South and Central America. When I say big, hungry bastards, I really mean big; the largest cane toad on record was something like 15 inches from asshole to nose. Weighed nearly six pounds. And I mean hungry; cane toads are ravenous. They’ll eat anything. Plants, garbage, dog food, other amphibians, reptiles, small rodents. These guys have been known to kill and eat birds. 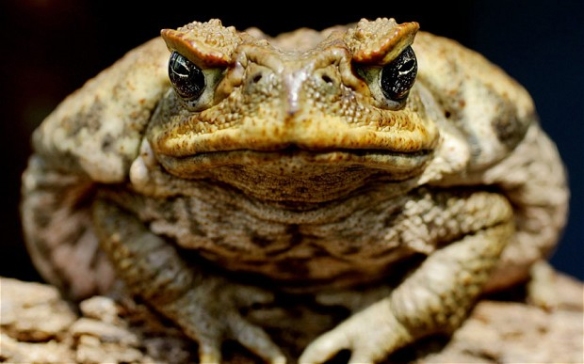 And they’ve been around forever. Archeologists have found fossil cane toads dating back to the Miocene. We’re talking at least five million years ago. They’re survivors. Not just because they’re big, hungry bastards, though that helps. They’re survivors because they reproduce at an insane rate. A single clutch laid by a cane toad contains around 30,000 eggs — that’s like three times the number laid by ordinary toads and frogs.

Because they’re such big bastards, you’d think they’d be a prime target for predators, right? Not so much. Because these guys are also poisonous. They secrete a powerful bufotoxin that can kill most animals.

So…big, hungry, astonishingly fecund, and poisonous. In general, it’s wise not to fuck around with these toads. But people are greedy and stupid, so that’s exactly what we’ve done. We introduced them to sugar cane fields in Hawaii, in the Caribbean, in the Philippines, and in Australia to gain control over rats and beetles and other pests.

And hey, it worked. The toads ate the rats, they ate the beetles, they ate the pests — and then they just kept eating everything else. Everything else. Now cane growers are desperately trying to find some way to control the warty bastards — to keep them in their place. And they’re finding it really, really difficult. . 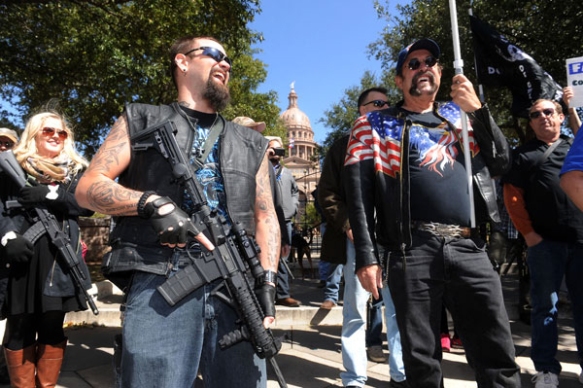 And hey, it worked. The GOP fed these groups a steady diet of fear and suspicion and rage, and they ate it up. Like any invasive species, the extremists found an ecological niche and began to chow down. Initially the GOP.was pleased with the results.

But now things are getting dicey. The Republicans are beginning to see the problem with invasive species. Cane toads don’t stop being cane toads just because the beetles are gone. They’re still hungry and they’re still poisonous, and they don’t stop.

We’ve seen that most recently with the yahoos of Open Carry Texas. A couple of days ago the National Rifle Association found themselves in the improbable position of suggesting the Open Carry folks in Texas might want to moderate their behavior.

[W]hile unlicensed open carry of long guns is also typically legal in most places, it is a rare sight to see someone sidle up next to you in line for lunch with a 7.62 rifle slung across his chest, much less a whole gaggle of folks descending on the same public venue with similar arms.

Let’s not mince words, not only is it rare, it’s downright weird and certainly not a practical way to go normally about your business while being prepared to defend yourself. To those who are not acquainted with the dubious practice of using public displays of firearms as a means to draw attention to oneself or one’s cause, it can be downright scary.  It makes folks who might normally be perfectly open-minded about firearms feel uncomfortable and question the motives of pro-gun advocates.

Well, they got that right. When you’re snacking down on your burrito at Chipotle or shopping for a new crowbar at Home Depot, seeing a ‘gaggle’ of armed men enter the premises might make a person really fucking uncomfortable. 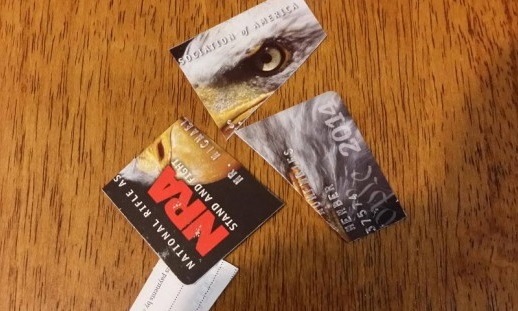 The response of open carry supporters? Many have cut up their NRA membership cards. The NRA is no longer extreme enough on the Second Amendment. We see that same response across a wide spectrum of social issues. That’s where the Republican party is today. That’s why there are almost no moderate Republicans in office. That’s why we don’t see any pragmatic Republicans, any environmentally friendly Republicans, any pro-choice Republicans.

Cane toads, by the way, are cannibalistic; they don’t mind eating their own kind.

14 thoughts on “cane toads of politics”