Here’s one of the reasons I love history. The very first Iowa State Fair opened on 25 October, 1854. On that very same day, on the Crimean Peninsula some 5200 miles away, British light cavalry troops went barreling down a valley in a suicidal assault on entrenched Russian forces — the infamous Charge of the Light Brigade.

The first Iowa State Fair lasted three days and had an attendance of about 7,000 visitors. Nobody died. The Charge of the Light Brigade lasted about half an hour and involved nearly 700 men; 156 of them were killed (along with 335 horses), and another 122 were wounded.

Tennyson, of course, wrote a stirring poem romanticizing the pointless slaughter of the Light Brigade. I think the world would have been a better place if he’d written a poem about the grand prize-winning sheep at the Iowa State Fair, or food-on-a-stick. It’s not as dramatic, to be sure, but I believe we could do with much less “Theirs not to make reply / Theirs not to reason why / Theirs but to do and die” and more food-on-a-stick. 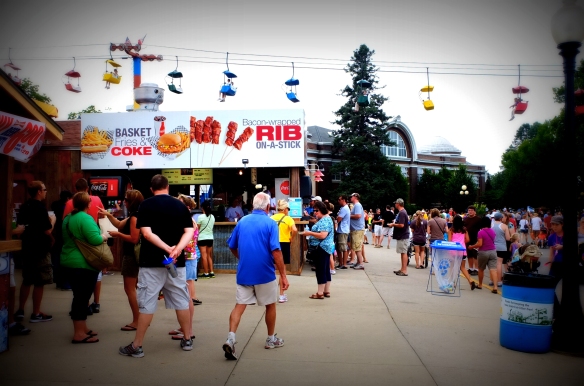 Bacon-wrapped Barbecued Rib on a Stick

Sadly, this year there was no Chocolate-Covered Fried Bacon On-a-Stick — the State Fair Food Trifecta. 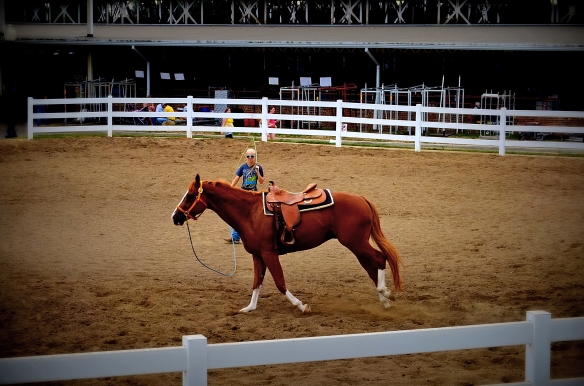 Food and animals (and animals raised to be turned into food) are a significant part of the fair. I’m pretty much a dunderhead when it comes to agriculture, but I enjoy wandering through the various animal barns and looking at the livestock. I can tell a horse from a cow, and a cow from a sheep, and a sheep from a pig — but one horse looks pretty much like another horse to me, and while I’m sure individual swine have distinct personalities, don’t ask me to tell one from the other.

But the kids who raised them can tell them apart. No doubt adults take a great interest in the livestock judging, but it’s almost always young teens who are in the ring with the animals. There’s something very sweet and innocent about watching these earnest young folks show the animals they’ve raised (of course, you have to ignore the fact that those pigs might turn up next year on the Iowa State Fair menu — and, in the case of the bacon-wrapped barbecued rib, some of them could turn up twice). 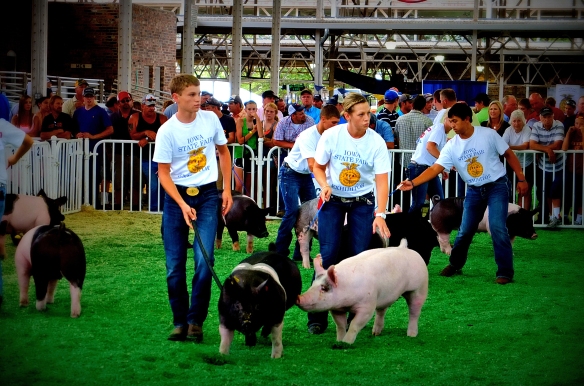 The fair was given its permanent location in 1886. The fairgrounds covers 445 acres (160 of those acres is devoted to campgrounds for fair-goers and exhibitors). Most of the primary buildings were constructed in the early 1900s. They’re lovely old buildings, well-maintained and preserved. Although the Agriculture Building (home of the Butter Cow) was built in 1904, it’s a classic example of late-19th century exposition style architecture. It would have been easy for the State Fair Authority to tear down these old buildings and replace them with more modern structures, but to their credit they’ve resisted that temptation. 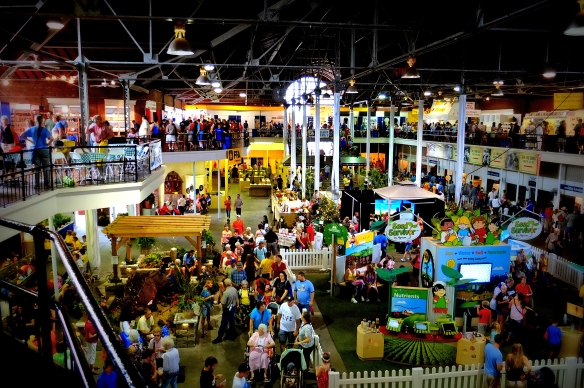 I often visit the fairgrounds during the off-season just to walk through the massive old barns and structures. One of my favorites is the Horse Barn, built in 1907. We’re talking about two acres of brick and stone and metal girders — that’s more than 87,000 square feet. In other words, it’s a really big fucking barn. It has nearly 400 stalls; during the fair they’re almost all filled with really big fucking horses. And to be honest, even during the off-season the place smells faintly of old hay and horseshit. But I find it weirdly lovely, and I don’t mind the smell. Much. 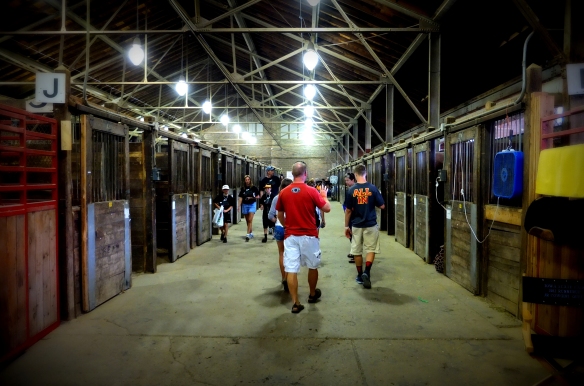 One of the things I love about the Iowa State Fair is the celebration of useless skills. Let’s face it, nobody really needs a blacksmith anymore. But you have to love the fact that there are people still using a forge to work iron and steel, people still weaving basketry by hand, people throwing pottery and canning jam and quilting and brewing ale and growing Fairhope miniature roses.

The fair not only awards prizes to folks who do those things well, they provide space for people to give demonstrations of their skills. In one building you’ll see a guy working iron, in the next building you’ll see somebody painting miniatures on wood, or weaving a rug out of alpaca hair, or using a pocketknife to whittle a birdcage from a single block of wood. It may be silly and archaic, but it’s also pretty wonderful. 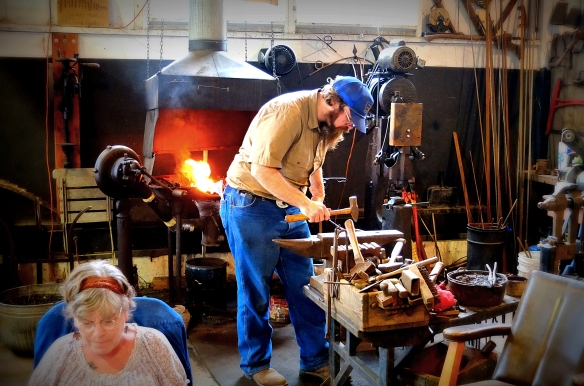 And then, of course, there’s the Midway. That’s the term used in the U.S. and Canada for an area deliberately separated from the exhibition sites and designated for various forms of entertainment. The term ‘midway’ was coined during the great Chicago World’s Columbian Exposition, held in 1893 (Columbian because it was the 400th anniversary of the arrival of Christopher Columbus to the New World — and yes, it was actually the 401st anniversary and yes, there’s absolutely no connection between Columbus and the city of Chicago, but don’t blame me; I’m just explaining the origin of the term).

The Midway is where you’ll find the games of chance (in which chance rarely plays a part), the very worst forms of fair food (which is saying something), amusement rides (designed, I’m convinced, to provoke the regurgitation of fair food), and other sources of pleasure and delight. 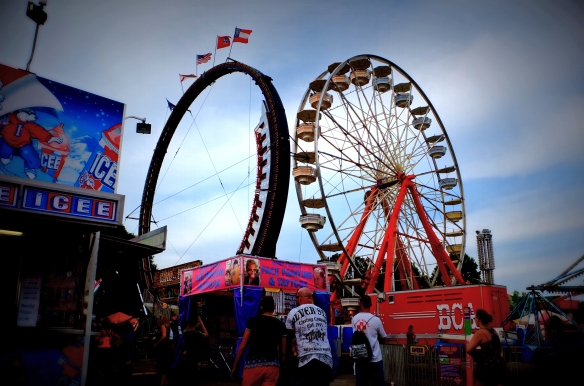 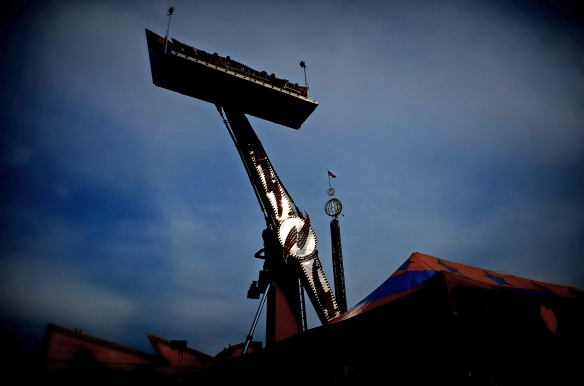 More of the Midway

The Midway reaches its peak madness hours after dark — which is why I tend to leave before twilight. I have grown older and wiser and less tolerant of noise and vomit and drunken bikers. But I’d be lying if I said I didn’t like the Midway. No state fair experience is complete without a trip through the Midway.

On the periphery of the Midway you can find the more tame amusements — the ones designed for children. You can’t always see the children’s rides, but you can locate them by the wide fringe of camera-toting parents surrounding them. 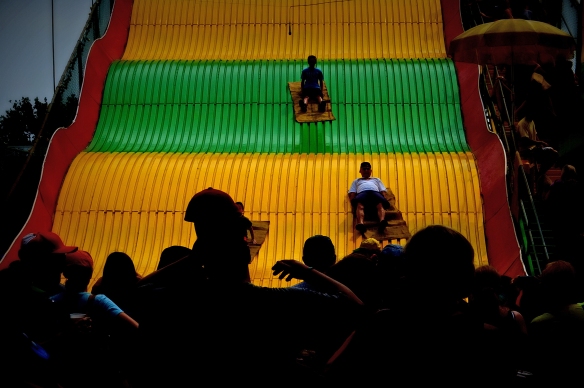 I spent about six hours noodly about at the Iowa State Fair, and that was enough. I didn’t get to see everything I’d wanted to see, but still I managed to eat a Bacon-wrapped Barbecued Rib On-a-Stick, a Deep Fried Pork Tenderloin with Bacon on the Inside and Outside, and a Deep Fried Hostess Twinkie On-a-Stick (surprisingly without bacon).

It wasn’t until I was driving home that I realized I’d neglected to see the Butter Cow. That’s been an Iowa State Fair tradition since 1911 — a life-sized cow carved out of around 600 pounds of butter. Each year since 1996 (Iowa’s Sesquicentennial) there’s also been a companion butter sculpture. That first year it was a butter version of Grant Woods American Gothic (I swear, I’m not making this up). There have also been butter versions of Elvis, Da Vinci’s The Last Supper, John Wayne (honest, I’m really not making this up), a Harley Davidson motorcycle, Tiger Woods (don’t look at me, I’m just reporting this), Neil Armstrong’s walk on the moon, and Harry Potter. 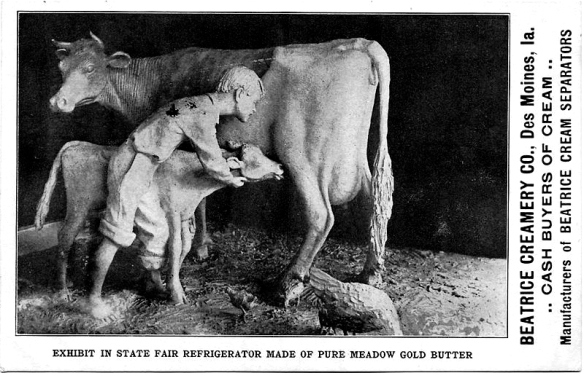 This year the companion sculpture was a butter Abraham Lincoln (in honor of the centennial of the completion of the Lincoln Highway, which runs through Iowa). That’s the Iowa State Fair — a bacon-wrapped barbecued rib on-a-stick, a pig that weighs over 1000 pounds (did I forget to mention the largest pig and cow competitions?), and the Great Emancipator carved from a solid chunk of churned cow’s milk.