I’ve met one Justice of the Supreme Court. Well, two if you’re willing to count Thurgood Marshall — but that was in 1993 and Thurgood Marshall was dead at the time. You can’t really say you’ve ‘met’ somebody just because you looked at his coffin lying in state in the Great Hall of the United States Supreme Court building. I did meet Nina Totenberg that day, sorta kinda; she was interviewing some of the people standing in line to meet Thurgood Marshall’s coffin. She didn’t interview me, but she smiled at me when I said “Hi Nina.” She has a nice smile. When you’re standing in a long line on a cold January morning to look at somebody’s coffin, a nice smile means a lot.

The Supreme Court Justice I did meet was Antonin Scalia. I met him at Heathrow Airport in London. I was arriving to help conduct a summer course in International Justice Systems. I’m not sure why Justice Scalia was in London. Probably wanted to experiment in fucking up a judicial system that’s older than ours.

My colleague spotted Scalia behind us in the airport, and paused a moment in order to meet him. I paused as well, because I’m not a total jerk. My colleague introduced the both of us and told him why we were there. He shook Scalia’s hand. Scalia, to his credit, said something gracious and encouraging, then turned to me.

I didn’t extend my hand. Neither did he. It was immediately clear to both of us that we were mortal enemies.

I do not like Justice Scalia. I’ll grudgingly admit he’s brilliant and articulate jurist, but he’s also a judicial hypocrite. He claims to be a Constitutional originalist and textualist, but he never seems reluctant to treat the U.S. Constitution as a living document when it suits his ideology. For example, Scalia has stated the 14th Amendment (which, among other things, guarantees equal protection under the law) doesn’t necessarily apply to women or gay folks since it was crafted after the Civil War for the purpose of preventing racial discrimination. Yet during the 2000 election crisis, in Bush v. Gore, Scalia used that same 14th Amendment and that same equal protection argument to decide to stop the Florida recount. (Do I need to point out that George W. Bush was not a victim of racial discrimination?)

Justice Marshall was — still is — a hero to me. Not just because he was a civil rights lawyer at a time when that was a dangerous occupation, but because he never lost his compassion for common folks or his zeal for protecting the civil rights of all people. Antonin Scalia used the 14th Amendment to insure George Bush would be elected president; Thurgood Marshall used the 14th Amendment to end racial segregation of public schools. 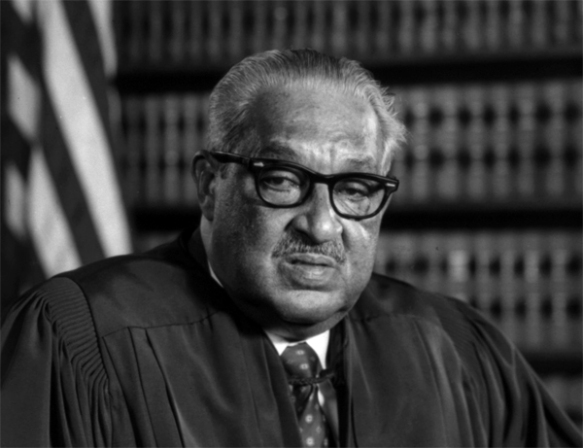 Associate Justice of the Supreme Court of the United States, Thurgood Marshall

I was a doctoral student at American University when Marshall died in January of 1993. Three days later, his coffin was lying in state in the Supreme Court building, on the same catafalque that had held Abraham Lincoln’s. Instead of attending class, I joined the long, subdued line of people standing in the cold, waiting to pay their respects. You hear that phrase a lot, paying respect. This was one of those instances when the phrase was entirely accurate.

I don’t know how many people passed by his coffin. Thousands. All kinds of people. People in suits, of course, since this was Washington, D.C. But also people in military uniform, young folks in jeans, old black women who’d dressed in their Sunday outfits that Wednesday. What moved me the most, though, was the number of working folks who showed up. Regular people, standing in long lines, outside in the January air, come to pay their respects to a Justice of the Supreme Court of the United States. I’ve never seen anything quite like it.

They closed the doors at ten o’clock that night. I’d already gone home by then, but I heard about it. The people still outside waiting got to see Marshall’s coffin carried out of the Great Hall and down the steps. If you’ve never been to the Supreme Court Building, it looks pretty much like any other governmental structure in DC. But above the door, these words are carved: Equal Justice Under Law. Thurgood Marshall believed in those words, and he made a great many other people believe in them as well. 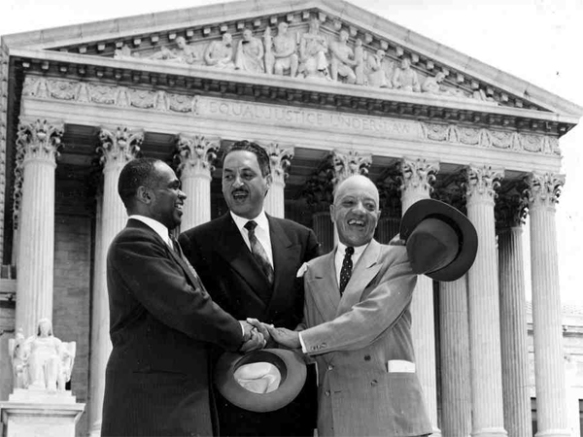 Young Thurgood Marshall on the steps of the U.S. Supreme Court

1 thought on “equal justice under law”