When I was a kid, a neighbor had a crow for a pet. I was altogether fascinated by that bird. It was huge and black; it walked with a dignified, clerical stride; and it was astonishingly clever. It was so smart it hardly seemed to belong to the bird family. It was was almost as if some sort of spirit being was inhabiting an unnaturally large bird’s body. The bird was so large I found it a little scary and intimidating, but I was completely taken in by it.

Ever since I’ve been a fan of the crow. A fan of all the larger Corvidae, actually — ravens, jackdaws, rooks, magpies — but mainly the plain old common crow. One of the things I love about crows is that despite their size (they’re burly bastards; they get up to about 21 inches from beak to tail) they’re almost invisible. People simply don’t notice them most of the time. Cardinals, they notice. Goldfinches, they notice. Blue jays (also Corvids, by the way), they notice. Bright, cheery, colorful birds — even the tiniest of them — get noticed. Crows get ignored. It’s like they have the power to cloud the minds of humans. 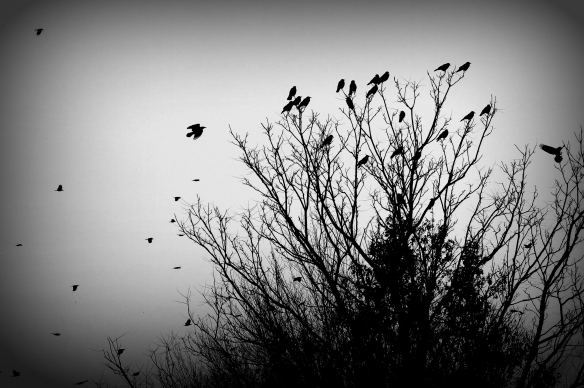 From the day I first picked up a camera, I’ve wanted to take a good photograph of a crow. Not a good ‘nature’ photograph that includes a crow. Not a documentary photograph. Not a ‘pretty’ photo. What I wanted was to take a photograph that showed crow-ness. I wanted to shoot a photo that depicted crows as I understood them. That desire became more intense after I discovered Karasu, the book of photographs by Masahisa Fukase. Karasu means ‘ravens’ in Japanese. The English-language version of the book was called The Solitude of Ravens. They were the most amazing black and white photographs — strange and wonderful. Fukase’s ravens were feral and furious; they looked supernatural and dangerously smart. I wanted to photograph a crow the way Fukase photographed ravens.

And I tried. For years I tried. If I saw crows — in town, in the woods, on a bike path, it didn’t matter where — I’d often follow them. I have been led astray by crows more times than I can count. But I never got a shot I liked. Never. 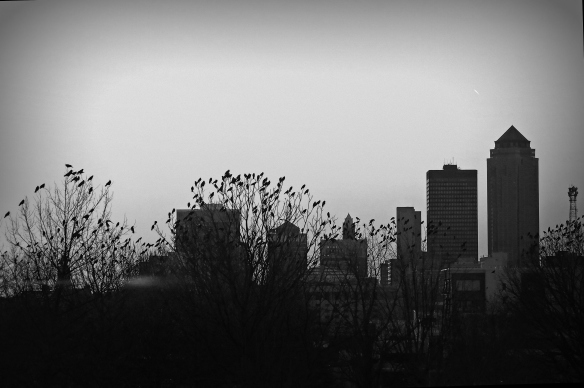 Yesterday on my Thursday Walk for Utata I happened to hear some crows flying overhead. I was talking on my cell phone at the time and had to end the call rather abruptly. “Oh god, crows…there are crows…lots of crows…have to go…bye.” I couldn’t see where they were coming from; a bulding blocked the way. But as I cleared the building I could see a tree filled with crows. Filled.

So I rushed to get there. I needn’t have hurried though. Crows kept coming. And coming. And flying away and coming. For an hour crows came, landed in the trees, rested a bit, took off, flew away. An hour. The most amazing hour. And they were still there when I left, still flying away, still arriving. 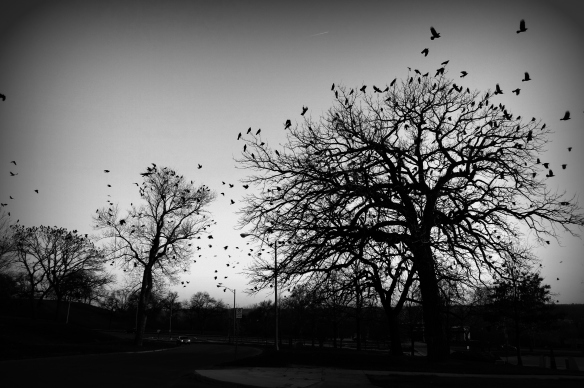 After about ten minutes I realized there were really too many crows. It was impossible to focus on just a few. It was a crow jumble, a mosh pit of corvids. It was almost Biblical. I’ve no idea how many there were. An overwhelming number of crows. There are, for example, 482 visible crows in the photograph above (Yes, I actually counted them, putting a red dot over each individual crow so I wouldn’t count them twice; 482…and there are certain to have been some I couldn’t make out in the tangle of branches).

The noise was staggering. Thousands — tens of thousands — of crows, all cawing and cackling. It created a sort of pervasive white noise. Your brain filters it out. Intellectually you register it as noise, but it somehow seems both physically and emotionally distant. Like if you were hearing it through the wrong side of a telescope — if that makes sense. Perhaps it was just sensory overload. 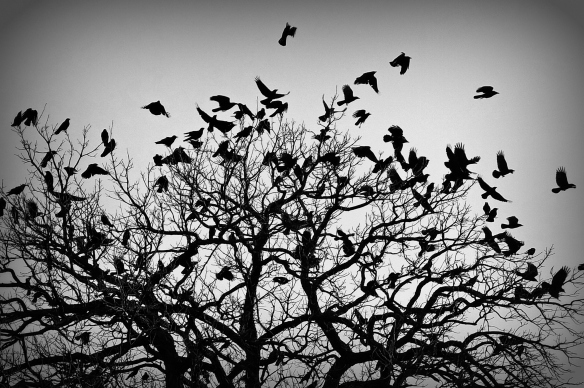 It never occurred to me to use my camera to video the crows — which I deeply, deeply regret. Instead I tried to find some way to photograph the mass, to show the scale of the murder of crows. It was impossible, of course. Maybe Fukase could have done it. Maybe. I surely couldn’t.

Eventually I stopped trying. I let the camera hang idly in my hand. I just stood there and watched and listened and was amazed.

It was, for me, a truly phenomenal moment — if you can call an hour a ‘moment.’ I don’t know why so many crows gathered together. I don’t know where they came from or where they were going. They were flying off into the sunset. Literally. 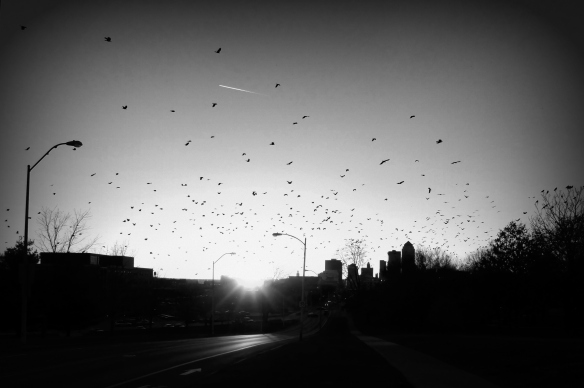 I still don’t have the photograph I want. I came a bit closer, but I suspect the only way to show real crow-ness — to show the essence of crow — is to zero in on just a few birds. Three, maybe, or four. Or two. Maybe one. Maybe just a part of one. I don’t know.

But last evening’s experience didn’t cure me. It added another level of enchantment to my understanding of crows.